We don’t always get to lead our Newsletter with good news, but this time we do! For the first time since 2013, the Federal Reserve Board has all seven members confirmed and in place. And, Governor Lisa D. Cook is the first African American woman and first woman of color to be a member of the Board in its 109-year history. I was honored to join the members of the Board of Governors, Senator Sherrod Brown, Director of Domestic Policy Susan Rice, CFPB Director Rohit Chopra, FDIC Acting Chair Martin Gruenberg and many other dignitaries, friends, and family for a celebration at the ceremonial swearing in for Dr. Cook, Dr. Philip Jefferson and Vice Chair Michael Barr. 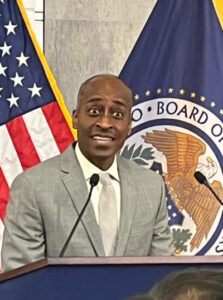 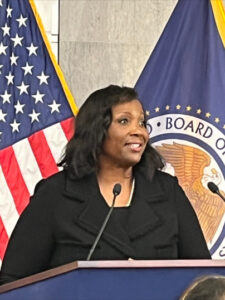 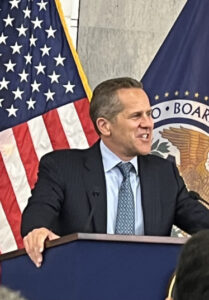 It was a moving and joyful event! These are three incredibly talented, deeply experienced, highly qualified and accomplished professionals who are all dedicated to public service. Each will bring their different perspectives to the Fed, and national economic and financial policy will be better as a result. The Fed now not only looks more like America, but it will represent more of America, which is long overdue at the Fed.

While not as august as the Fed, Better Markets is also fortunate to have a team of professionals deeply experienced in the public and private sectors in banking, securities, derivatives, legal and related subjects, who work across all the financial regulatory agencies, the Departments of Treasury and Justice, as well as in Congress and the White House. In the past several weeks and months we were pleased to bring on several new experts who will help us fight against injustice, inequality and predatory wealth extraction while fighting for broad-based wealth creation and lead to greater economic security, opportunity, and prosperity for all Americans.

Travis Horr has joined our team as Director of External Affairs. Travis has a thorough understanding of the policymaking process and brings his experiences in government affairs and Capitol Hill advocacy. As an Air Force veteran, I know that Travis’ skills and experiences from serving in the Marine Corps will also enable him to be an effective advocate.

Peter Rappoport is now our Senior Fellow. After 29 years at JP Morgan Chase leading quantitative teams in several key areas, Peter’s unparalleled data analytics abilities will strengthen our advocacy across all the agencies. Peter has already made a significant impact on our analytical capacity and strategic positioning of key issues.

Houston Shaner has joined our legal team as Senior Counsel. Houston brings eight years of excellent legal experience and a nuanced understanding of the legal process and how it impacts policymaking and regulatory issues. Houston also served two years with AmeriCorps in Alabama and has firsthand experience with the impact of government in the lives and on the livelihoods of Main Street Americans.

Our new team members are helping us weigh in on crucial issues including making affordable housing available to all Americans, the Supreme Court’s impact on economic and financial matters, the growing threat of the crypto lobby and its impact on our financial system, and a pro-Main Street agenda for the Federal Reserve’s new Vice Chair for Supervision.

As fall arrives and the end of the year looms, I hope that you will renew your support for our work or consider supporting it for the first time. None of our work or accomplishments would be possible without generous donors like you. As a 501c3 nonprofit, we depend entirely upon those donations to fight for consumer and investor protection, a financial system that supports the real productive economy, and broad-based wealth, opportunity, and social justice.

From TV, radio, and print — Better Markets’ views on all matters related to finance the economy have been sought after and featured in major news outlets. Here are our top hits from September.

Are commission-free brokerages ripping you off? The SEC doesn’t think so
“The SEC does not have to ban payment for order flow or other specific anti-investor, conflict-ridden market practices if it requires best execution to be the best available price at the time given order characteristics and market conditions.”

New Fed banking chief Michael Barr lays out vision on digital currency and keeping banks safe
“It’s clear that the vice chair is focusing broadly on making sure that the financial system supports the real economy and is not a threat to it so that people’s jobs, saving and homes are not in danger from financial instability.”

Cracking Down on a Wall Street Trend: E.S.G. Makeovers
Dennis Kelleher said the S.E.C. rules, if enacted, should help bring some agreed-upon definition to an area of investing that “lacks legal content and clarity.”

President Biden Is Cracking Down on Crypto. What’s Ahead for Companies and Investors.
“Now, you can have a crash where trillions of dollars vanish in months but the systemic implications are zero. That won’t happen if the industry is connected to the core of the banking and financial system.”

*You can find all of Better Markets’ media hits from September here.

Fed Vice Chair for Supervision has the Right Goals, Priorities and Agenda for a Safer and Fairer Financial System
In a recent speech, Michael Barr laid out an ambitious but realistic set of priorities for his term. Better Markets sent him a letter outlining specific policy actions that can help achieve those goals.

The CFTC Should Protect Democracy, Markets, and Investors by Rejecting Request to Allow Gambling on Elections

In this comment letter, we explain the multiple reasons why the CFTC should reject a proposal from KalshiEX LLC to allow betting on elections.
SEC Proposal Will Modernize Outdated Regulations That Act as Loopholes in Today’s Capital Markets
Better Markets filed a comment letter to the SEC to modernize a rule that will ensure more brokers and dealers are required to become members of a national securities association.

With the November elections drawing closer, September in an election year is typically a busy month for Congressional activity, and this year was no different.  Several high-profile Congressional hearings took place, as well as some significant legislative developments on important financial reform issues.

Wall Street’s Top Cop Testifies Before Senate Banking
Gary Gensler, the Chairman of the US Securities and Exchange Commission, testified before the Senate Banking Committee on September 15.  He reviewed and defended the SEC’s appropriately ambitious agenda to protect investors and markets while promoting capital formation.  It’s a tough job and there are lots of critics, but the SEC needs to stay focused on its mission and doing what is right.  That’s why the SEC was created as an independent agency.  Protecting investors and markets often reduces predatory profits at even the biggest market participants and they don’t like that.  Being a cop on the Wall Street beat doesn’t make the SEC popular on Wall Street or with its many high paid and high placed allies.  Their objective is profit maximization, but that too often comes from bending if not breaking the rules and laws to their benefit, pulling those profits from the pockets of Main Street Americans.

Crypto is a classic example and, unsurprisingly, was a topic at the hearing.  It’s a relatively new business following an old financial industry playbook: blanketing Washington with lobbyists and burying it with campaign contributions, it’s trying to avoid regulation altogether or, if that fails, to buy the weakest, most favorable regulator.  The goal is to have the appearance of regulation to deceive Main Street Americans while the political and financial insiders know the reality is little to no regulation enabling widespread predatory behavior.  Senator Brown of Ohio, who is Chair of the Banking Committee, applauded the SEC’s crypto agenda, saying “If Wall Street and its allies are complaining, it probably means you’re doing your job.”

Megabank CEOs Testify Before House, Senate Panels
The CEOs of seven of the largest megabanks in the country — JPMorgan Chase, PNC, US Bancorp, Citigroup, Bank of America, Truist and Wells Fargo — testified before the House Financial Services Committee and the Senate Banking Committee on successive days on September 21 and 22.  Given the enormous impact these taxpayer-backed, Fed-supported, too-big-to-fail banks have on the lives and livelihoods of almost all Americans, we applaud the committees for holding these oversight hearings and welcome the annual opportunity for the public to hear from them.

While it sometimes seemed that the CEOs and members of Congress were talking past each other, that is to be expected.  Banks naturally want to tout what they do well and avoid talking about their weaknesses and failings.  Members of Congress want to talk about things that are important to their constituents and national policy as well as conduct oversight of the banks, which includes holding them accountable for their failings.  There were numerous important issues discussed, some contentiously, but mostly not, although that is due in part to the unhelpful hearing format (i.e., 5 minutes of questions per member, alternating between parties).  Wealthy, successful, powerful, and often cloistered CEO’s undoubtedly do not like having to answer questions, but that’s what the public’s elected officials are supposed to do: transparently and publicly conduct oversight and hold the powerful accountable.  That is a core tenant of democracy.

We hope next year that the Committees will consider also calling the CEOs of Morgan Stanley and Goldman Sachs.  To avoid the downsides of having too many witnesses and not enough time, the Committees should break the banks up into two days of hearings, one featuring Wall Street’s megabanks and one focused on the super-regional banks.  That way the discussions could be more focused and be more tightly related to the banks’ activities.

Senators Press Facebook Parent Meta for Answers on Crypto Scams
In other crypto-related news, a group of Democratic Senators led by Senator Menendez (D-N.J.) wrote to Meta CEO Mark Zuckerberg, asking for information about how the company fights cryptocurrency scams on its platforms, including Facebook and Instagram.  The senators cited data from the Federal Trade Commission showing that in 49% of the cases of cryptocurrency fraud reported to the agency, the scam originated on social media. The senators say that consumers have lost over $400 million in cryptocurrency scams.

IN CASE YOU MISSED IT

The Financial Times Tech Tonic podcast covers the crypto lobby’s enormous influence in its series “A sceptic’s guide to crypto.” They spoke with Dennis Kelleher who talked about the multifaceted influence industry and the stunning amount that the crypto industry is spending on lobbying for the upcoming midterm elections and how it could impact our entire financial system.