Lots happened in the last month from the Senate confirmation of nominees to the Federal Reserve Board (including the historic confirmation of the first Black female to serve on the Board) and a lively video AMA (ask me anything) on r/superstonk to yet more Wall Street crime and protecting consumers while insisting on accountability.

First, the U.S. Senate has finally confirmed Lael Brainard as Vice Chair of the Federal Reserve Board. During the past eight years as a Governor of the Fed she has been an effective, consistent, and steadfast defender of the critical financial protection rules necessary to protect Main Street families, our financial system, and the entire economy.  As Vice Chair, we are confident she will continue her tireless efforts to put the public interest first.

Unfortunately, Republican obstructionism continues to delay the confirmation of other key nominees. Republicans used the COVID-19 related absences of Senators to sidetrack the nomination of the highly qualified and deeply experienced Dr. Lisa Cook for Federal Reserve Governor, and to further delay the confirmation of Dr. Philip Jefferson and Chairman Jerome Powell. President Biden’s nominees are historic in terms of talent and diversity and it’s shameful that Republicans continue to prevent them from being confirmed.

Second, I recently did a video AMA with the subreddit r/superstonk.  The discussion covered everything from the GameStop trading frenzy, short sellers, Robinhood, and Citadel to the founding of Better Markets and why/how people should get involved in the Washington DC policymaking process, including regarding the rules that rig the markets against retail traders and the buy side.  You can watch the entire video here or view particular topics here.

Third, as our reports have demonstrated in the past, lawbreaking in finance and particularly at Wall Street’s largest banks is so common that one could think it is part of the business model.  The latest, egregious reminder of that was the trial of former Goldman Sachs’ junior partner Roger Ng, who was convicted of committing numerous crimes in connection with the global money-laundering and looting scandal of a Malaysian development fund known as 1MDB.

Goldman Sachs’ years-long involvement with 1MDB was indispensable and enabled the global crime spree, as detailed in this report.  Moreover, Goldman isn’t a first time offender; it is a lawbreaking recidivist.  Yet, DOJ cut a sweetheart settlement deal with Goldman and prosecuted just one junior partner after getting a plea from his supervisor, even though more than 30 Goldman executives were involved with 1MDB and there were numerous red flags that should have stopped the crime spree from happening.  This is a grossly inadequate response by DOJ to “one of the greatest financial heists in history” that egregiously corrupted democracy in an entire country.

DOJ’s highly selective (non)prosecution reaffirms the belief that on Wall Street crime pays, even at such a global scale, has minimal consequences and, even then, almost only for the most junior people.

Finally, in recent weeks we took important steps to help protect consumers and demand accountability. Our team has filed a flurry of comment letters encouraging the SEC and others to take action on issues like making money market funds more transparent and resistant, protecting consumers from billions in fees, and strengthening the whistleblower program designed to prevent the next financial crisis. We also released a major report on the dark and mostly unregulated private securities market, which is expanding at the expense of the transparent, regulated, and broadly accessible public securities market.

In a welcome piece of good news, we celebrated the U.S. Senate’s confirmation of Judge Ketanji Brown Jackson to the U.S. Supreme Court. As we explained in our March 15th report, we are confident that Justice Jackson will provide everyday American consumers and investors a fair hearing and a fighting chance when they are pitted against a powerful and too often predatory financial system that enriches itself at the expense of the real economy.

Thank you for all you do to support our organization and its work.

ICYMI- Last month, the long-awaited HBO MAX two-part documentary Gaming Wall Street, premiered, with the work of Better Markets highlighted throughout. The documentary explores the GameStop trading frenzy and its aftermath. Watch it on HBO Max 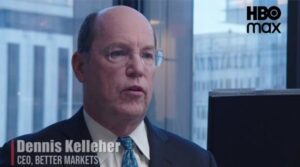 “If [a fund manager like Melvin’s Gabriel] Plotkin believes what he says about his ability, strategy, and future, then he should be willing to use his money to cover the costs of paying traders until he . . . makes performance fees based on, well, his performance!”, said Kelleher.

“As to compliance, in this age of electronic data processing, it’s hard to make a compelling case against a reporting obligation, especially one that is triggered by the issuer’s discretionary decision to engage in repurchases,” Better Markets’ Steve Hall said.

“Commodity speculation is largely unregulated because there are no position limits, or the limits are so high that they’re meaningless,” Kelleher said.

“The rule of law breaks down if billionaires get to play by a different set of rules,” Kelleher said.

“The government is literally giving private business – the money market fund sponsors – billions and billions a year for nothing,” said Kelleher. “And then when there’s market stress, they don’t have to cover the downside.”

CFTC Back In Full Force After Senate Confirms 4 Biden Picks

During the past month, Better Markets submitted comments letters to financial regulators on a broad range of issues and proposed rules:

The SEC’s current proposal on money market funds will help around the edges, but like prior reforms, these are still piecemeal remedies that won’t solve the challenges posed by MMFs. What’s really needed is a full package of reforms. Read More>

CFPB’s Examination of the Impacts of Junk Fees On American Consumers Is Key
Better Markets supports the CFPB for undertaking a close examination of the billions in junk fees issued by banks and credit card companies every year.   Read More>

SEC Must Make Stock Trading More Efficient, Less Risky
The SEC’s proposed rule would shorten the settlement cycle for securities transactions, from the current standard of two business days after the trade date (“T+2”) to one business day after the trade date (“T+1”). The rule will make situations like the Robinhood buying halt less likely. Read More>

The Dodd-Frank Act established the SEC’s Whistleblower Program to prevent the misconduct we saw during the financial crisis. Unfortunately, in 2020 the SEC finalized amendments weakened the program. Better Markets supports the Commission’s efforts to address some of the most problematic aspects of the 2020 amendments and urges the Commission to go even further. Read More>

With more than $100 trillion in assets under management by more than 14,000 advisers across the industry, a cyberattack or data breach of only a small portion of those assets could have wide-ranging impacts on investors and financial stability more broadly. Read More>

Under the securities laws, any person who acquires beneficial ownership of more than 5% of a class of securities must disclose that fact by filing a public report with the SEC within 10 days. The SEC is proposing to shorten the reporting deadline to 5 instead of 10 days. Read More>

It’s crucial that regulators keep pace with technology to protect investors and ensure the stability of markets. That’s why we support the SEC’s proposal to bring more transparency and oversight to electronic trading platforms. Read More>

The risks that are largely hidden by the lack of transparency around short selling were on display during the GameStop trading frenzy of January 2021. We support the SEC’s proposal to increase transparency into the short positions and short selling activity of institutional investment managers. Read More>

Too many private fund advisers employ opaque fee and expense structures to increase their own compensation at the expense of their investors. The SEC’s proposal will help rein in these predatory practices. Read More>

ACTIONS IN THE FEDERAL COURTS

Each month our legal team outlines some of the top cases we’re keeping an eye on, the Amicus “Friend of the Court” Briefs we have filed, and why everyone with a bank account, credit card, mortgage loan, or retirement loan should be interested in those cases. Read the latest updates from our team of legal experts.

The Senate voted on March 28 to confirm four Commissioners to serve on the Commodity Futures Trading Commission (CFTC). While the CFTC is often overlooked among regulatory agencies, its mission is an essential one, as it oversees markets and products that impact the everyday lives of all Americans, from the cereal on their kitchen table to the gas they put in their car to the plastic in their children’s toys. Now that the CFTC has a full slate of Commissioners, it can dive into addressing the many challenges in our financial markets, including an economy that is vulnerable to shocks resulting from Russia’s invasion of Ukraine.