Washington, D.C.  –  Better Markets released a Report that details for the first time the nearly 400 major legal actions against the six largest Wall Street banks over the past 20-plus years. Dennis Kelleher, President and CEO of Better Markets, released the following statement in connection with the Report:

“Wall Street’s six biggest banks—Bank of America, Citigroup, Goldman Sachs, JPMorgan Chase, Morgan Stanley and Wells Fargo—have been subject to almost 400 major legal actions and have paid almost $200 billion in fines and settlements during the last 20-plus years (chart attached). Every one of those major legal actions are detailed in the Report we are releasing today, and they show that those banks have committed almost every conceivable type of financial crime or violation, often repeatedly.

“Proving that monetary penalties, no matter how large, simply are not enough to punish or deter lawbreaking, the country’s biggest banks have actually increased their lawlessness over the last decade (chart attached). That’s because the banks have trillions of dollars in assets and hundreds of billions of dollars in profits, and they pay those fines years afterwards with shareholder money. These penalties have become a nuisance cost of doing business, effectively less than a slap-on-the-wrist.

“The problem is that banks don’t commit crimes; bankers do. Until individual bankers, including supervisors and executives, are meaningfully punished with personal fines and are barred from the industry, the crime spree will continue. The current system, where bankers buy get-out-of-jail-free cards with other people’s money, incentivizes lawbreaking and is the ultimate moral hazard. Of course, banks should continue to be punished as well. It’s not either/or. It’s both.

“Only that will stop the Wall Street crime spree. If such commonsense changes are not adopted, these banks and bankers will continue to break the law and the crime spree will continue unabated. That’s what 20-plus years of almost 400 major legal actions and almost $200 billion in fines tells us.”

Read the report and fact sheet. 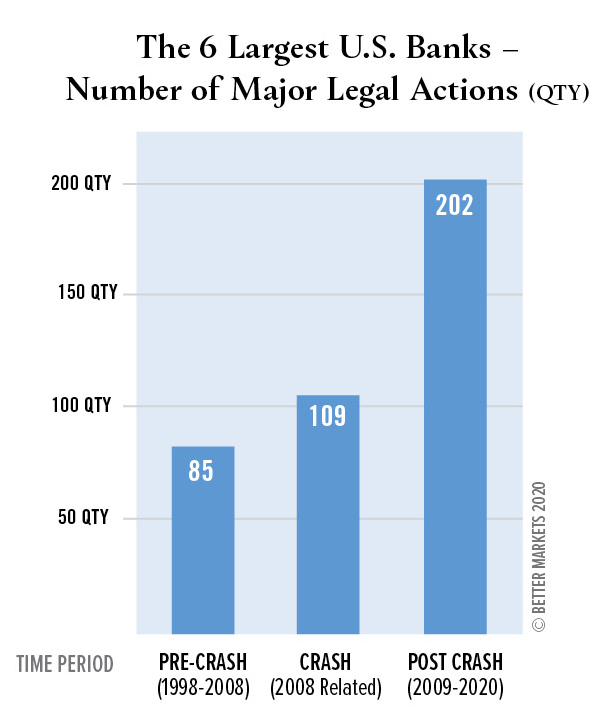