As President Obama prepares to deliver his final State of the Union address on January 12, it’s difficult to remember how incredibly bad the economy was when he took office seven years ago and how important financial reform is to getting the economy working again for all Americans.

Unfortunately, this difficulty in remembering isn’t an accident. Wall Street, its allies and lobbyists have spent tens of millions of dollars to distract and divide the American people with false spin about how bad the financial crash was and the importance of comprehensive financial reform for American families’ economic security, opportunity, and prosperity.

How bad was it? When the President took office in January 2009, it was just a few months after Bear Stearns, Lehman Brothers, AIG, Citigroup, and virtually every other megabank and financial activity in the country failed or nearly did. Before President George W. Bush left office on January 20, 2009, trillions of dollars in bailouts had already been thrown at the financial industry to prevent its collapse. As President Obama entered office, the country was in the middle of the worst financial crash since the Great Crash of 1929 and was facing an economic catastrophe that was deteriorating so quickly that a second Great Depression was a real possibility.

For example, when President Obama took office in January 2009, the unemployment rate had jumped to 7.8 percent, but continued to climb until it eventually peaking later that year at 10 percent. However, the more accurate U-6 rate – which takes into account people who are unemployed and those forced to work part time because they couldn’t find full time work (the so-called “underemployed”) – peaked at 17.5 percent for five out of seven months between October 2009 and April of 2010: 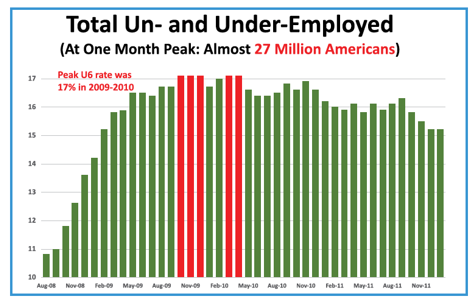 This means that nearly 27 million individual Americans (an amount equal to the entire population of the state of Texas) were entirely out of work or desperately looking for full time work. Many of those workers were heads of households, which means that the impact of the employment crisis actually touched more than 50 million Americans.

The bad economic news kept piling up for the new President. The condition of the U.S. housing market was no better: it was in the midst of a complete collapse, ultimately with more than 16 million foreclosures filed: 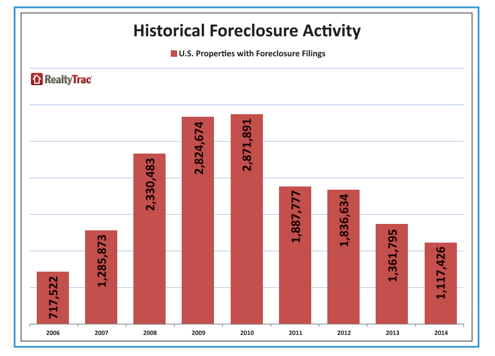 Those job losses and foreclosures spread the economic calamity like a conveyor belt throughout neighborhoods and entire communities as prices for homes plummeted to 2001 levels. This caused underwater mortgages (where the mortgage was higher than the value of the house) to skyrocket:

When all this economic devastation is added up, it is going to cost the United States more than $20 trillion in lost gross domestic product (GDP), or more than $170,000 for every man, woman, and child alive in the country today, as outlined in this Cost of the Crisis report. This chart highlights the lost GDP from the pre-crash 2007 economic activity projection to the post-crash reality of today, with the yellow area representing all the goods and services never produced, the growth never achieved, and the jobs, savings, and homes lost: 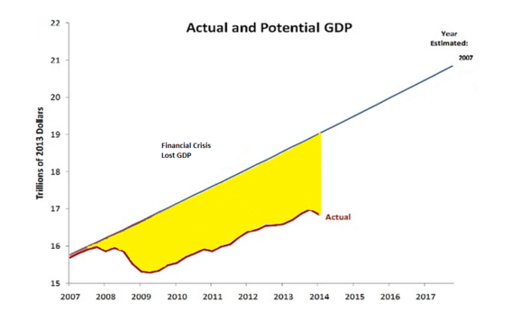 Making matters worse, the trillions of dollars used to bail out Wall Street and the increased spending necessary for social programs caused enormous public deficits and debt. On the private philanthropic side, endowments were crushed and charitable giving plummeted to the lowest levels in 50 years. The result was a double whammy for the priorities of the American people because both public and private resources were diverted to bail out finance and respond to the human suffering caused by the financial crash.

Consequently, spending for every other priority – like education, research and development, science, medical advances, infrastructure repair, and so much more – was significantly reduced in both the public and private sectors. Literally trillions of dollars were re-directed away from those priorities to deal with the crash and crisis. That is why, no matter what issue one might care about most, everyone has a personal interest in making sure that a financial crash does not happen again.

That’s also why we must continue reining in Wall Street: to prevent future crashes that will cost the American people trillions of dollars more. First and foremost, the rulemaking implementing the Dodd-Frank Wall Street Reform and Consumer Protection Act must be completed ASAP. It will bring transparency, regulation, and systemic stability to Wall Street’s highest-risk activities. It will also level the playing field and allow other non-systemically important firms to enter the markets and bring much needed competition and lower prices for everyone. Finally, it will substantially reduce if not eliminate the risk posed by the too-big-to-fail banks, nonbanks, and activities.

Second, the financial cops on the Wall Street beat must be fully funded. The CFTC is the front line defense in the all-important $700 trillion derivatives markets, where the last crash was silently incubated and spread around the world. Yet, the CFTC is grossly underfunded and simply cannot do its job of protecting the American people. The President should immediately make $100 million in emergency funding available to the CFTC.

Third, everyone knows that banks don’t commit crimes, bankers do. Until those individuals, including executives and supervisors, are held accountable civilly and criminally, then egregious lawbreaking will continue to be just a cost of doing business on Wall Street. The president should order all federal agencies with jurisdiction for any illegal conduct in connection with the financial crash of 2008 to commence all appropriate legal actions by June 1, 2016.

As millions of our neighbors still struggle with the economic calamity, President Obama must remind the American people in his upcoming final State of the Union address of the economic wreckage caused by the financial crash, and redouble the Administration’s efforts to ensure that it never happens again.