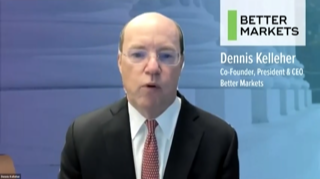 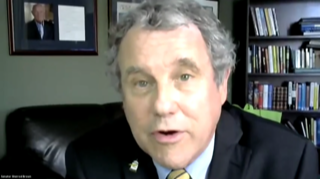 Sen. Sherrod Brown (D-Ohio), ranking member of the U.S. Senate Committee on Banking, Housing and Urban Affairs, recently joined Better Markets’ President and CEO Dennis Kelleher for an insightful discussion on the current state of financial reform during a webinar presented by Better Markets. The webinar, “President Trump’s Deregulation of Wall Street Making Catastrophe More Likely,” was fittingly held Sept. 15, which was the 12th anniversary of the Lehman Brothers’ collapse.
Mr. Kelleher kicked off the event with the release of a new report “Protecting Main Street from President Trump’s Dangerous Deregulation.” Building on other reports released by Better Markets (all linked below), this report examines the current state of the financial rules that protect Main Street families and businesses from Wall Street’s dangerous, high-risk activities. It identifies the top priorities for each financial regulatory agency to undo the most dangerous deregulations since 2017.
In addition to Sen. Brown’s prepared remarks, there was a lively Q&A with the Senator on financial reform and the Trump administration efforts to weaken rules put in place to safeguard all Americans, which was moderated by Mr. Kelleher.
Sen. Brown also generously thanked Better Markets for its important work over the last 10 years: “I think this report shows the importance of Better Markets in [Washington, D.C.]…It’s so important that more of us understand, that more of us read, and that more of us spend time with Dennis and Better Markets. Thank you for the importance of your work.” Mr. Kelleher also thanked Sen. Brown for his long career fighting for hardworking Americans, noting that his life’s work has been fighting for Main Street families and workers, which the financial rules are meant to protect.
As Sen. Brown said, “We want the economy to actually work for workers and their families. Ultimately, the goal has to be to reorient our economy from Wall Street wealth to the Dignity of Work.” He also remarked that “the banking committee, with its broad authority and oversight can hold some accountability to the industry and the regulators, [but] they need the support of people who are on the side of Main Street, hardworking families and businesses.”
Mr. Kelleher agreed, noting that Main Street Americans need to be more engaged to act as a counterweight to Wall Street, and he concluded by encouraging individuals to get involved. “Let people know what you think…let your representatives and senators know. Let the banking committee know…and visit Better Markets’ website and sign up for future events.”
Here are the links to some of the other reports and events discussed during the webinar:
Follow Twitter.com/bettermarkets and Facebook.com/bettermarkets to stay informed about the economic and financial issues facing the country and what Better Markets is doing to promote the economic security, opportunity and prosperity of the American people.
For those of you who found this special report interesting and want to support Better Markets, please donate here. Our work is only possible because of the generous support of donors!
In the News
Share