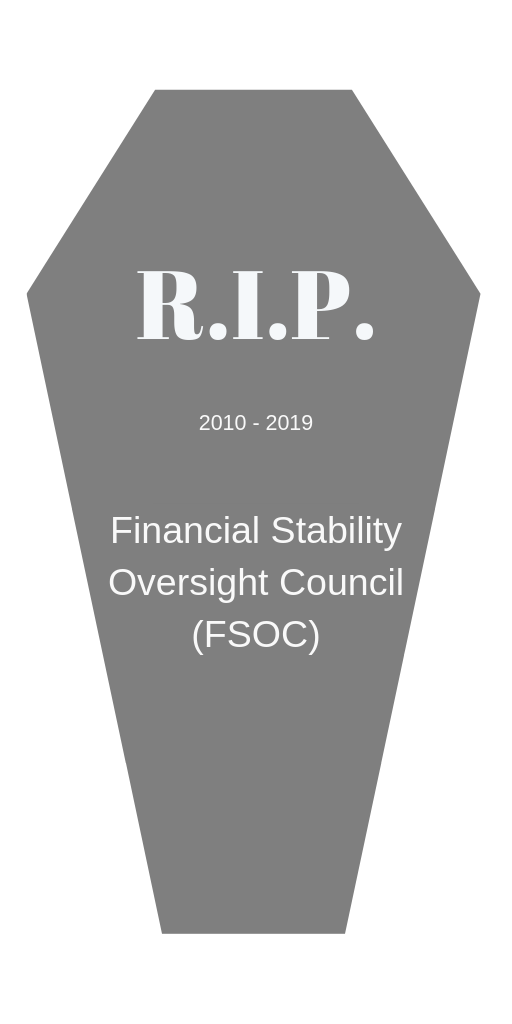 RIP FSOC As it Puts Another Nail Into Its Own Coffin, Endangering all Americans
The Financial Stability Oversight Council (FSOC) was an innovation created by Dodd-Frank in response to several clear lessons learned in the 2008 crash. It was primarily to ensure that:

2. systemic threats from nonbanks would be analyzed and regulated similar to systemic banks to end:

(a) the regulatory arbitrage that incentivized the dramatic growth of the shadow banking system; and

(b) surprises and bailouts like the explosion of AIG.

3. there would be a second check on all front-line financial regulators in the event that they failed to act or acted insufficiently within their area of jurisdiction; and

4. focus on emerging, “over the horizon” or “black swan” systemic threats regardless of where they originated or who had jurisdiction if and when such threats materialized. 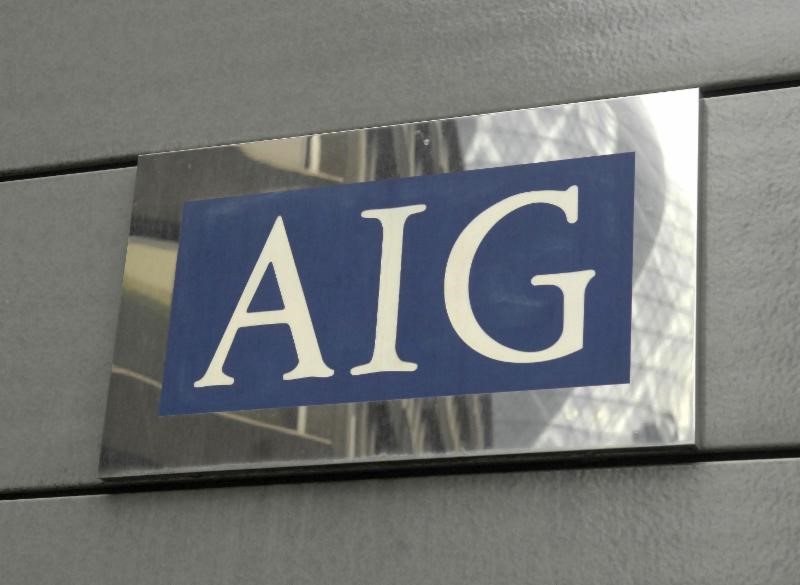 While it may not have been ideal (and little is when massive legislation is enacted), it’s purpose and role is critically important in protecting taxpayers, the financial system and the economy. The motives and ideas behind FSOC had broad bipartisan and industry support. (For more in depth information and details, see the testimony of Better Markets’ President and CEO, Dennis Kelleher, before the Senate Banking Committee here.)

Unfortunately, FSOC has never lived up to its potential or purpose. The Obama administration’s FSOC was cautious to a fault, although it wasn’t entirely their fault. The hydra-headed structure, largely driven by political considerations, made it unwieldly under the best of circumstances and, no surprise, it was under constant assault from the industry seeking to prioritize its interests over the public interest. Nevertheless, they stood up FSOC from nothing and designated four systemically significant nonbanks and de-designated one that de-risked. 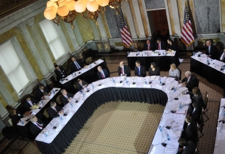 Rather than building on that foundation, however tepid, the Trump administration has been on a mission to kill FSOC from the beginning, which is what their industry allies wanted. Trump’s FSOC’s first moves, as discussed in detail here, were to de-designate the three systemically significant nonbanks Obama’s FSOC designated. But that was just the beginning.

Nonbanks in the shadow banking system like giant, global insurance companies and asset managers simply would not tolerate FSOC evaluating them as systemic risks. Therefore, in a move that can only be seen as an effort to intentionally blind itself to risks at systemically significant nonbank entities, Trump’s FSOC just moved to change its entire regulatory approach to stop evaluating specific nonbank entities as systemic threats and to only look at potentially systemic activities and products, a so-called activities-based approach.

While sounding reasonable, it is not. An activities-based approach to evaluating nonbank systemic risks is an untested, unproven and impractical way to determine or regulate systemic risks.

Moreover, making it more difficult to designate even nonbanks’ activities and products, the FSOC also needlessly added a quantitative cost-benefit analysis and a speculative assessment of how likely a company is to experience financial distress. These additional self-imposed, unnecessary hurdles that the FSOC has erected all but guarantees it will not be designating nonbank systemic threats.

These actions irresponsibly ignore the le­­ssons of the 2008 crash, which was ignited in and spread by systemically significant nonbanks in the shadow banking system. Coming on top of its de-designation of the only three designated nonbanks, these actions put another nail in the coffin of FSOC, which is basically putting an “out of business” sign on its door. 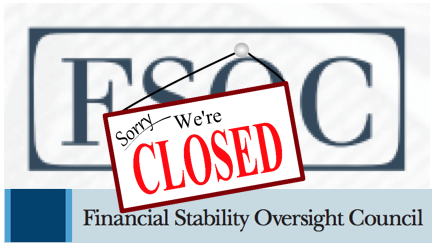 Why do we say this? Because it is clear that if the FSOC’s new methods for evaluating systemically significant nonbank activities had been used in the years before the 2008 crash, it is extremely unlikely that any of the many nonbanks that collapsed and were saved by trillions of dollars in bailouts would have been identified or designated as systemically significant. Think AIG, Bear Stearns, Lehman Brothers, Goldman Sachs, Morgan Stanley, money market funds, and so many more. None would have met the criteria Trump’s FSOC has now established.

By caving to industry’s self-interested demands, the FSOC has subordinated the public interest to private profit maximization and the blind zeal not to be regulated no matter what. If that sounds like the reigning regulatory philosophy before the 2008 crash – which enabled that crash – it should: it’s the same. Designating nonbank entities or activities as systemically significant is not an either/or choice; it is both, depending on the facts and risks. It is irresponsible to prejudge a systemic risk analysis and raise the barriers to identifying systemic risks, which only increase the likelihood of future crashes and bailouts. 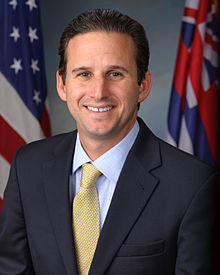 Thinking About a Financial Transaction Tax
Senator Brian Schatz’s bill to impose a financial transaction tax (FTT) has ignited a very healthy discussion in policy circles. However, one of the big problems with discussing an FTT is that people do not agree on what an FTT is; how it should be structured; what its purpose would be; or numerous other key aspects of it.

The first question to ask is what is one trying to accomplish with an FTT? There are potentially several different answers to this question. For example, it could be to raise revenue. It could be to reduce/stop predatory conduct, which could include, for example, maker/taker or high-frequency trading (HFT) generally. Is could be just to reduce/stop possible flash crashes. It could have nothing to do with predatory conduct and be focused solely on market stability. Of course, it could be all of the above or something else. That’s why thinking through these issues first is so important. 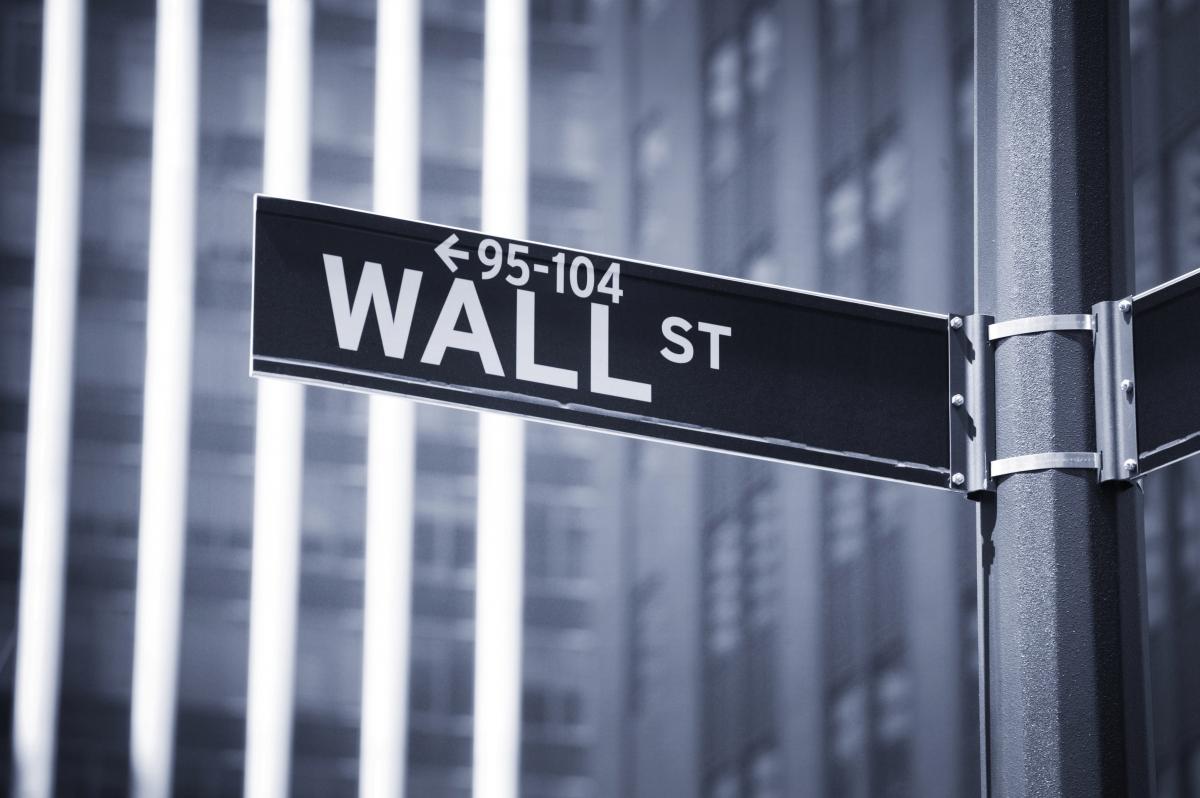 That, however, doesn’t end the analysis. Once there are answers to those questions, then one has to think through what one is proposing to tax. For example, a tax on transactions, orders, cancelation, etc. Then one needs to think about outcomes and consequences (intended and otherwise) of what one decides to tax. For example, will the tax be passed along to investors, be absorbed by middle men/others, a combination or something else?

Then one has to think about alternatives. For example, if the goal of an FTT is to reduce predatory conduct, is that due to fragmentation and/or other market structures/features and would other actions be better than an FTT to address that? Even if those alternatives are better, would they be feasible and/or doable?
The bottom line is that there’s lots to think about and, hopefully, Sen. Schatz’s bill will engender a robust discussion of these important issues which will significantly affect our markets and investors.

However, like pony express and the stage coach, those days are long gone. Today with supercomputers and technology, funds are available virtually immediately after the check is deposited or otherwise received. Yet, although there is real-time availability of your money, U.S. banks and financial institutions do not make them available to you typically for three business days (interestingly, most of the rest of the developed world moved to real-time payments). That is insane in the 21st Century where such transactions take place in microseconds, soon to be nanoseconds.

If you’re upper middle class or wealthy, none of this really matters to you because you already have funds in your bank account that act as a cushion. But if you are poor, or one of the tens of millions of Americans who are working but living paycheck-to-paycheck, this has a huge impact on you and causes real economic hardships. For example, not having access to their own money for days, particularly at the end of the month when many bills are typically due, needlessly drives people to extortionate and predatory payday lenders, which can spiral into a debt cycle that makes life much more difficult that it has to be.

This anachronistic payment system is needlessly costing hardworking Americans tens of billions of dollars every year. That is simply unacceptable and must change. The Fed is responsible for the payments system and has been charged with changing it, but it has merely been studying it for years and coming up with meritless excuses. The Fed’s failure to change here is indefensible. They need to make the change ASAP or someone needs to make them make the change. 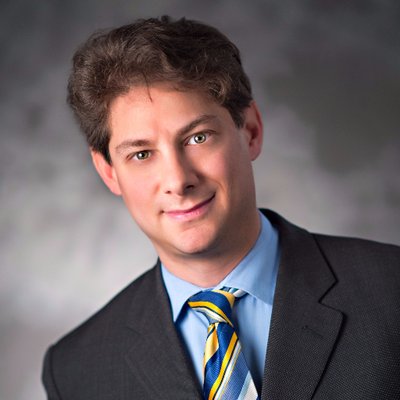 No one has detailed the history, costs and the need for changing this dumb, outdated system better than Aaron Klein at Brookings. He filed a terrific comment letter with the Fed on this subject, which he summarized here. More recently, he elaborated on the key points here. Bottom line, the time for change is now and the Fed should do it before it is forced to do so by Congress. 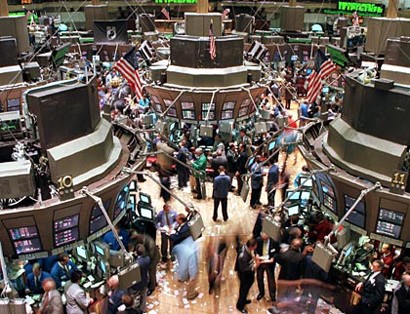 Bravo to the SEC for Directly Attacking Some Dysfunctional/Predatory Market Structure Problems
SEC Chairman Jay Clayton and Director of Division of Trading and Markets, Brett Redfearn, appeared together at an eventat Fordham University in New York City this week and addressed the SEC’s recent efforts in reforming our fragmented, dysfunctional and too often predatory market structure. They were joined by Craig Phillips, Counselor to Treasury Secretary Steve Mnuchin, who opened the event by discussing Treasury’s October 2017 “Capital Markets” report. 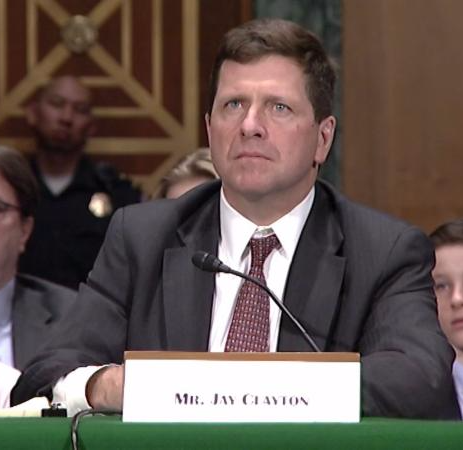 Chairman Clayton and Director Redfearn discussed SEC’s 2018 market structure accomplishments, including finalizing theTransaction Fee Pilot, the approvals of rules to increase transparency of order routing and to improve the regulation of Alternative Trading System. Chairman Clayton and Director Redfearn also discussed the roundtables the SEC organized last year on thinly-traded securities, combating fraud in retail markets, and market data and access. The regulators summarized the lessons they drew from these roundtables and announced their intentions to proceed with specific reform proposals. 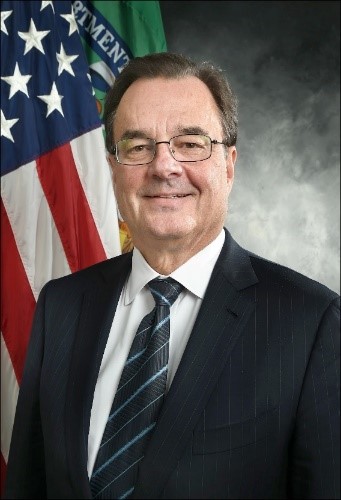 Perhaps the most important of these proposals would be the improvement of the availability of market data (often referred to as “core data”) that market participants who serve investors and the public use to make informed investment decisions. Upgrades to the Securities Information Processor (SIP) in terms of speed, content, depth, governance, transparency, and fair and efficient access will be key to ensure that “core data” is available to and serves the market participants’ needs to satisfy their best execution regulatory obligations. Said simply, without upgrades to SIP, broker-dealers are forced to buy proprietary data from the large exchanges (who now profit more from selling data than offering trading facilities) just to satisfy their best execution obligations. Upgrades to the SIP and “core data,” if done right, has the potential to unleash free market forces and serve the interest of long-term investors and the integrity of our markets. 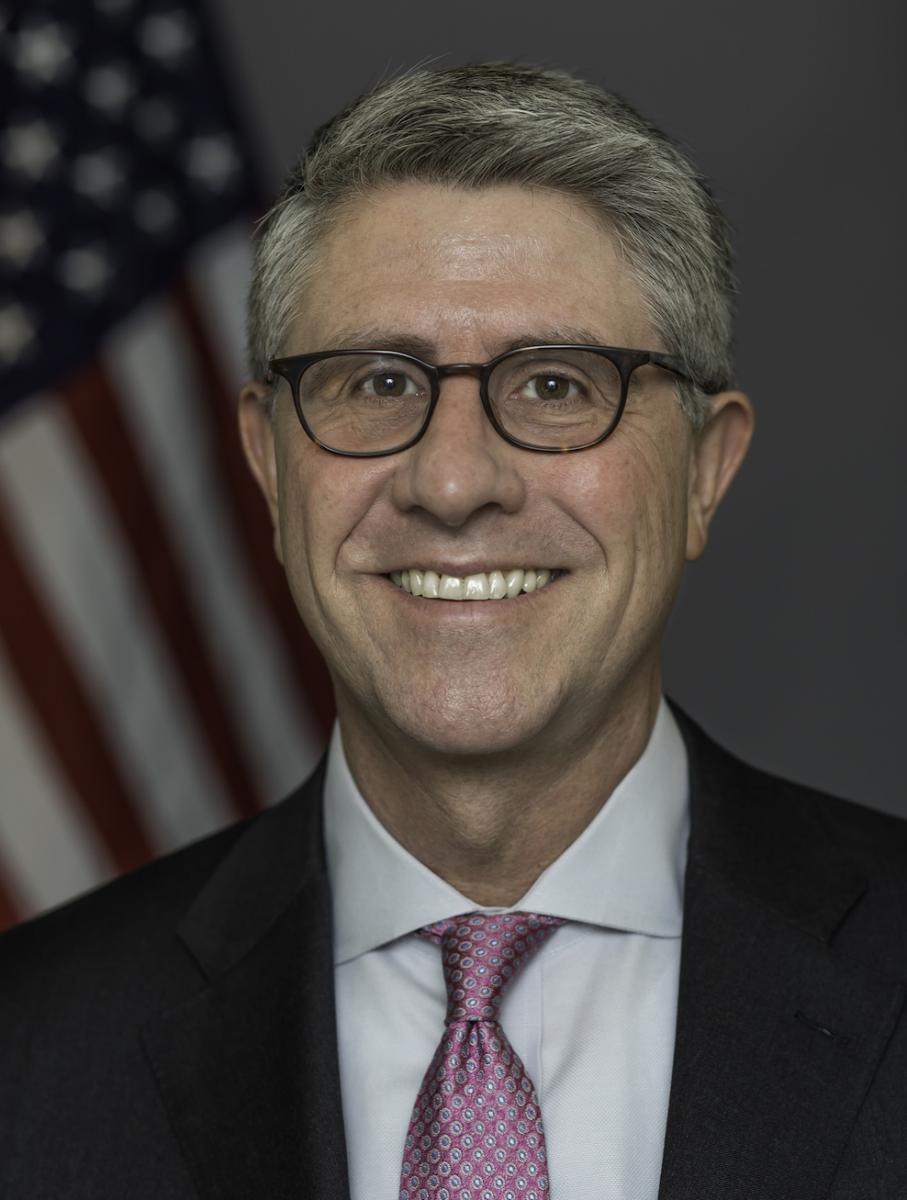 To accomplish this, they will need the courage to free themselves of the deeply self-serving and corrupt influence of the entrenched interests of some on Wall Street who facilitate practices that enrich a small handful by tens of billions of dollars a year picked from the pockets of America’s investors and savers.

So far, Chairman Clayton (left) and Director Redfearn (above) have shown courage, tenacity, thoughtfulness, and the tact necessary to overcome these difficult hurdles and pressures in the market structure space. We applaud their efforts thus far and stand ready to support them as they continue to make much-needed and long-overdue reforms.