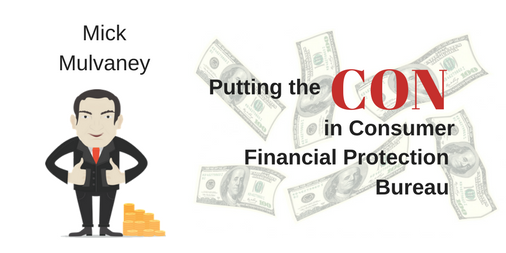 Along with many, many others, we took note of CFPB acting director Mick Mulvaney’s recent remarks to the American Bankers Association, but not for the same reason.  There’s no denying that his comments about the preferential treatment given to lobbyists that had contributed to his campaign were outrageous and epitomize the Washington swamp.  However, those comments have overshadowed yet another action by Mulvaney to further weaken the CFPB and the critical protections it provides American consumers by eliminating public access to the Bureau’s consumer complaint database.

While the first remark received a lot of attention, the second will prove to be more harmful to Main Street consumers.

If acting director Mulvaney is successful in removing the public’s access to the consumer complaint portal, it will mean consumers will no longer be able to see if others have also been ripped off in the same way by the same firm. This means you, your family, and your friends will be left in the dark and unable to see complaints registered by other Main Street consumers. This decreases accountability at the CFPB and increases the possibility that millions of other consumers will unwittingly take their business to a bad actor because they don’t know any better and unfortunately won’t have the benefit of this shared source of vital consumer information.

As noted in a recent Bloomberg editorial, open access to the database has been beneficial to the firms themselves.  Once a complaint is publicly posted, it is sent along to the company which has 15 days to respond.  This has resulted in consumers receiving a quick response from the company 97% of the time and a positive resolution for the consumer about 80% of the time.  Furthermore, the database compels the CFPB to act and also provides a gigantic set of data for journalists and researchers to evaluate and assess how both industry and the bureau are performing.

This is not the first time Mulvaney has taken a step towards protecting financial predators and away from the Main Street consumers who desperately need as much help as possible. In fact, in the 5+ months since President Trump appointed Mulvaney as acting director of the CFPB, Mulvaney has made 20 anti-consumer moves, all of which have been tracked on our blog: “Putting the CON in Consumer Financial Protection Bureau.”