An article in the Financial Times this morning entitled “Financial Groups Hit by Flood of New Rules” (12/8/11) uncritically repeats industry claims while failing to note that those new rules were necessitated by the near-collapse of the financial and economic systems in 2008.  It also failed to note that any increase will be overstated because the new rules follow a decade of deregulation when few rules were adopted and even fewer enforced.

Not only does that make comparisons to regulatory actions in prior years misleading (i.e., of course, any increase in regulations will give you a seemingly huge percentage increase), but it also ignores what a decade of little to no regulation cost the world:  the worst financial and economic crisis since the Great Depression, which has cost people, taxpayers and countries worldwide trillions of dollars, not to mention untold pain still being suffered by tens of millions throughout the world.  (We track some of those costs at another section of our website:  https://bettermarkets.org/cost-crisis .)

The utter lack of regulation or enforcement of what little regulation there was in the decade leading up to the crisis isn’t really subject to legitimate dispute, i.e., by anyone other than banks, their allies and purchased supporters.

Here are just a few highlights – really lowlights — off the top of my head:  the Commodities Futures Modernization Act (CFMA) of 12/21/2000 exempted all OTC derivatives from regulation, putting that entire market into unregulated darkness and causing its size to explode.  This was, of course, the famous conflict between CFTC Commissioner Brooksley Born and the Rubin/Summers/Greenspan and SEC Chair Levitt free-market crowd.  Then there was 11/12/99 Gramm, Leach, Bliley Act that put the nail in the coffin of the Glass Steagall Act, officially ending the separation between investment and commercial banking and allowing full unitary banking (as it is called in the UK).  In 2003, the OCC prohibited states from enforcing predatory lending laws against any banking entity enabling subprime lending to explode without any regulation.  (The Fed had authority to pass regulations on predatory lending since the early 2000s, but didn’t pass its first regulation until 2010.)  Then there’s the SEC’s 2004 change to the net capital rule that was by Wall Street to lever up to whatever amount they wanted.

There are just so many articles, studies and analysis of this that I’m not sure where to begin, but the article “Banking Regulator Played Advocate over Enforcer” in Washington Post is as good a place to start as any.

Of course, a picture is worth a thousand words and this infamous one captures the reigning philosophy of no regulation is the only regulation, albeit under the guise of “cutting red tape,” which of course meant regulations for banks: 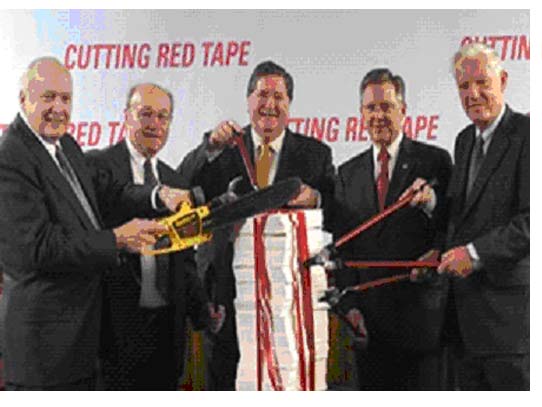 This photo is from 2003 shows two regulators: John Reich (then Vice Chairman of the FDIC and later at the OTS) and James Gilleran of the Office of Thrift Supervision (with the chainsaw) and representatives of three banker trade associations: James McLaughlin of the American Bankers Association, Harry Doherty of America’s Community Bankers, and Ken Guenther of the Independent Community Bankers of America.

While this list of little or no regulation is focused on the US, no one can credibly argues that same happened around the world.  One only has to look at the reports regarding the failures of UBS, RBS, and innumerable other banks and financial institutions around the world.  The deregulatory tale is the same.

Thus, when put in proper context, any additional regulation and any associated costs pale in comparison to the economic and financial devastation ushered in by the financial crisis, which was enabled by little to no regulation.  Re-regulating the financial industry after a decade of recklessly pursing profits and pocketing the upside, while sticking taxpayers with the bill for the downside, must be done and reporting on it should include the full story.