Thank you for checking-in this month to read about what we have been up to.

Since you last heard from us, I had the privilege of appearing on CNBC’s Fast Money show to talk about how our current equity markets rip off retail investors and the buy side generally. Sadly, the markets are too often a wealth-extraction mechanism for the few rather than a wealth creation system for the many. That was highlighted by the recent Robinhood-GameStop saga, but the debate continues about what to do about that, which is what I discussed on CNBC.

The Federal Reserve’s Dodd-Frank Act stress tests are back in the news, but they have become, in a word, toothless. Regrettably, they neither stress nor really test Wall Street’s biggest banks anymore, providing the public false comfort in the strength of the banking system. The Fed is perilously close to snatching defeat from the jaws of victory here, which you can read more about in our press release and fact sheet on these issues.

Speaking of the Fed, there has been a lot of attention as to whether Chair Powell will be reappointed or not, including as recently reported in the Wall Street Journal and by Reuters. That pending decision has caused our December White Paper on the dangerous deregulation by the Fed during Powell’s chairmanship to get a lot of attention. Unfortunately, Chair Powell’s recent Congressional testimony about these actions were incomplete and imprecise if not inaccurate, as we pointed out in this press release. This attention has also increased the scrutiny of Fed Governor Lael Brainard, who is also being considered for Chair. We recently detailed her activities fighting Chair Powell’s deregulation here.

Forced arbitration has also received recent attention. If arbitration was as good as all the corporations say it is then they wouldn’t have to force it on their customers in tiny print legalese buried in very long customer contracts. It’s forced on customers and investors because it takes away their rights, is done in secret, has almost no procedural protections, is biased in favor of industry, and those customers who nevertheless do it almost always lose. That’s why we oppose it and why we support those who stop doing it, which, as we recently pointed out, Amazon kinda sorta did. They removed mandatory arbitration as a required method of dispute resolution from its terms of use, but also took away its customers’ right to a jury trial. One step forward; two steps back. It is long past time that Amazon and the rest of Corporate America allow their customers to choose between the courts and a genuinely fair, cost-effective arbitration system when they have been legally harmed.

Finally, we are pleased to announce that Andres Chovil has joined us as our Research and Program Associate. Andres most recently worked for U.S. Rep. Tulsi Gabbard (D-HI) where he served first as a Legislative Assistant and then, as the Policy Advisor on the House Financial Services Committee. Andres’ arrival is bittersweet news for us because he will be replacing Michael Hughes. For over two years, Michael has proven invaluable in all he was asked to do, and more! Michael is leaving to attend Columbia Law School. We wish him well and have no doubt he will be wildly successful in all that he does in the future!

There’s a lot going on and much more coming up in the next month so look out for future Newsletters for more exciting developments. In the meantime, be sure to follow us on Twitter, Facebook and LinkedIn. Please feel free to send comments or questions to Maryan Abdelmesih at mabdelmesih@bettermarkets.com.

Thank you again for your interest in and support of Better Markets! 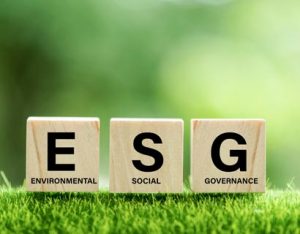 Investors, public interest advocates, the financial sector, regulators, policymakers, and elected officials in the U.S. and abroad have paid increasing attention to the way companies address environmental, social, and governance (“ESG”) issues in recent years.  Over the last decade or so, more and more investors are considering how companies incorporate these factors into their operations, risk assessments, and planning when making investment decisions.

In our July 14  white paper, What is ESG and Why is it So Important?,  Better Markets explores these ESG issues, particularly the impact of climate change and the prospects of competition in a decarbonized economy.

The Securities and Exchange Commission (SEC) has a vital and appropriate role in ensuring that corporations meet investor demand for information about ESG factors.  While skeptics and outright opponents of ESG engagement call for safe harbors to protect companies from liability for disclosures, we see reasons for optimism about the SEC’s increased focus on ESG issues in capital markets regulation.

Climate Risk and the CFTC 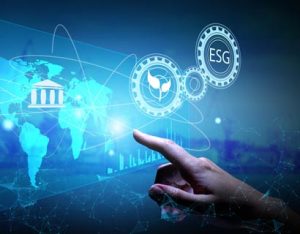 Better Markets urged Commodities Futures Trading Commission (CFTC) Acting Chair Rostin Benham and CFTC Commissioner Dan Berkovitz to continue their leadership in bringing attention to climate-related risks and using the public visibility of their positions to call for urgent action to accelerate the transition to a low-carbon economy.

Why it matters.  It can no longer be denied that human activities—particularly the emission of greenhouse gasses—cause well-documented global warming and climate change.  It is unlikely we can stop the emission of greenhouse gasses and may only be able to stop it if policymakers take bold, decisive, coordinated, and international regulatory and legislative action.  We agree with the report of the CFTC’s Climate-Related Market Risk Subcommittee of the Market Risk Advisory Committee (MRAC), Managing Climate Risk in the U.S. Financial System (“MRAC Report”), which says that “financial markets will only be able to channel resources efficiently to activities that reduce greenhouse gas emissions if an economy-wide price on carbon is in place at a level that reflects the true social cost of those emissions.”

What we said.  “Your initial actions have exemplified the way regulatory officials should be examining statutory mandates to find constructive solutions to the climate crisis and advance the Administration’s climate-change-related objectives.”

Bottom line.  The CFTC must continue to lead the policy discussion on carbon pricing by issuing a formal report with a series of market design and oversight recommendations that extend to primary, secondary, and offset market issues.

Read our June 24 letter to the CFTC regarding leadership in addressing climate risk here.

Action in the Federal Courts 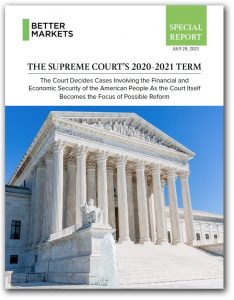 The past year has been a uniquely challenging time.  As most Americans and people around the world struggled to survive the Covid-19 pandemic, businesses and government institutions alike were forced to adapt to a largely home-bound and Zoom-centric workforce.  Through it all, the nine justices of the U.S. Supreme Court and their staffs soldiered on with their work, evaluating an incessant stream of petitions for certiorari, hearing oral arguments, and issuing almost 70 merits opinions resolving a wide range of important disputes.

In our just-released report, Better Markets takes a look back at some of the decisions issued by the Supreme Court from October 2020 through July of 2021.  Other Court-watchers will tackle the job of evaluating the Court’s decisions on the important social policy questions addressed this past year, including those surrounding the 2020 election, the Covid-19 pandemic, access to birth control, and other issues.

In our report, we focus on less high profile but vitally important decisions the Court handed down over the last 10 months in the financial and economic arena, which ultimately affect every American’s bank balance, directly or indirectly.  Those cases centered on the enforcement powers of the financial regulators, the requirements governing securities fraud class actions, the validity of bailout measures necessitated by the 2008 financial crisis, and the doctrine of standing, which determines who can even set foot in a federal court to have their grievances heard.  We also look ahead to a few of the key cases that the Court will consider next term, beginning on the first Monday of October 2021.

Finally, we briefly highlight some of the issues surrounding the Court itself that are drawing renewed and increasing attention, including its transparency, its operations, and its makeup—the Justices who serve.  For example, this Spring, we witnessed a renewed focus on the Court as the “Presidential Commission on the Supreme Court” commenced a series of hearings to examine a wide range of questions involving the size of the Court, the Justices’ tenures, and even the Court’s jurisdictional reach. The American public should understand these important institutional issues, along with the decisions that so profoundly affect their financial lives.

As his term approaches its end, Better Markets carefully monitored Fed Chair Jerome Powell’s semi-annual appearance before the Senate Banking and House Financial Services Committees.  We also provided substantive input for a House panel’s deliberation on investor protection, entrepreneurship, and the capital markets, as well as monitored a Senate hearing on the growing risks of climate change.  We’ll continue to keep a close eye on Congress until they leave for their August recess.

On July 14 and 15, 2021, Federal Reserve Chairman Jerome Powell testified before the House Financial Services Committee and the Senate Banking Committee.  These hearings, which the Congressional panels conduct twice a year to provide oversight of the Federal Reserve’s monetary policy, are an important opportunity for Members of Congress to ask the nation’s central banker for a progress report on the state of the economy.  This is particularly important in light of the unprecedented actions the Fed has taken – and continues to take – in response to the economic and financial crisis caused by the pandemic.

Better Markets was pleased to be asked to provide a statement for the record for the hearing, with extensive background on the role that the rating agencies played in fueling the 2008 financial crisis, and the prospects for addressing the longstanding conflicts of interest that are inherent in the ratings agencies’ business models.  You can read our statement here.

On July 20, the Senate Banking Committee held a hearing entitled “21st Century Communities: Climate Change, Resilience, and Reinsurance.”  During the hearing, Chairman Brown, a strong ally of Better Markets, cited the growing risk of climate change-related natural disasters, such as wildfires and tropical storms.  Other Senators on the Committee, including Chris Van Hollen (D-MD), Catherine Cortez Masto (D-NV), and Robert Menendez (D-NJ) talked about the importance of including investments in infrastructure resilience in any transportation spending bill that Congress passes this year.

In Case You Missed It

Check out these news articles that provide relevant and informative information on topics of interest to Better Markets and its staff.

Please note you may need a paid subscription to view certain articles below.

Get Ready for the Inflationary Pushback to ESG Investing
Bloomberg, July 15, 2021