This is a perfect illustration of why people look at Washington as a rigged system greased by the revolving door and cash that benefit Wall Street’s biggest banks and insiders and hurt hardworking Main Street Americans.

Eugene Scalia, on behalf of his financial industry clients, worked overtime to weaken, gut or kill the investor protection fiduciary duty rule adopted by the Department of Labor (DOL) in 2016 and strongly supported by investor, consumer and retiree advocates (including Better Markets as detailed here).  After five years of careful consideration, that rule was going to save tens of millions of Americans tens of billions of dollars every year, which would otherwise go into industry pockets.

Scalia, as a private lawyer, led the charge to kill that rule and he was successful in 2019, which was cheered by the industry.  As we detailed in a Special Report, this is consistent with the clients’ Scalia chose for decades to represent: large and powerful financial corporations and financial industry trade associations working to kill, gut, rollback, or weaken key financial rules intended to protect Americans from financial fraud, abuse, and recklessness. 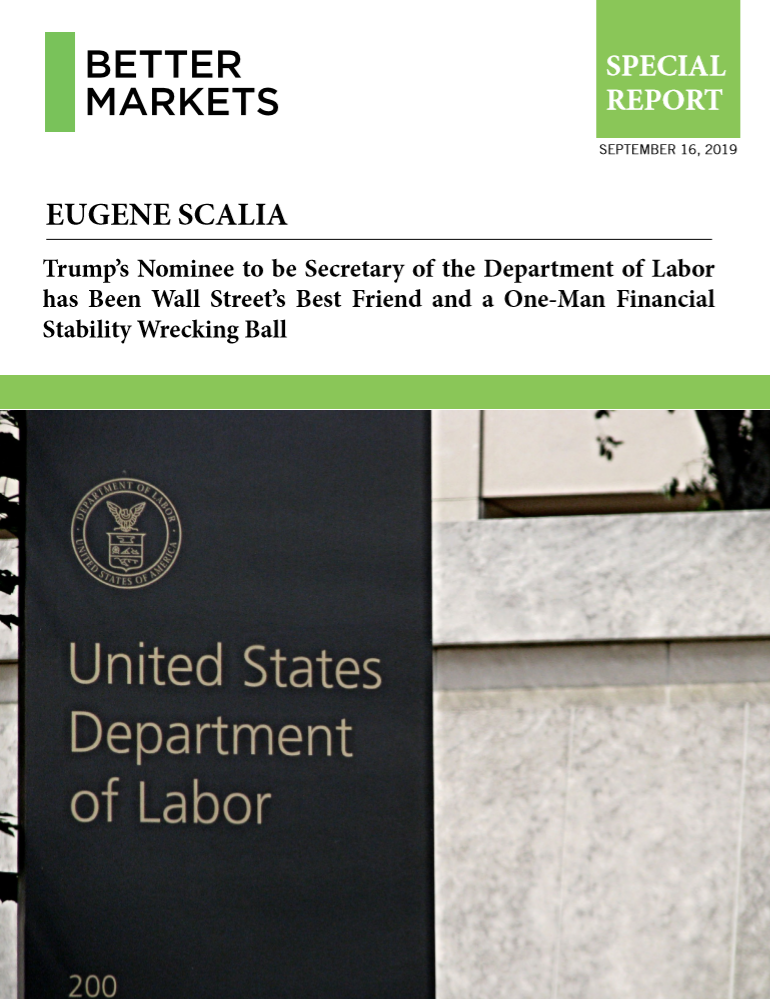 Scalia is now President Trump’s Senate confirmed Secretary of the DOL and apparently wants to nonetheless participate in the DOL’s reconsideration and re-proposal of a new fiduciary duty rule to replace that prior rule.  The new rule is not expected to protect investors, but be highly favorable to the industry and consistent with his prior private sector representation.  Thus, Scalia, as Secretary of the Department of Labor, would appear to be advancing the positions of his former private sector clients, creating a conflict of interest that should be prohibited.

Nevertheless, the DOL’s lawyers have concluded, apparently on a technicality, that Secretary Scalia does not have to recuse himself from participating in that upcoming DOL fiduciary duty rulemaking.  Whether or not that is correct as a legal matter, it is shockingly bad policy and practice.  At the very least, it has the appearance of impropriety.

Such actions just feed the public’s cynicism about senior government officials doing the bidding of their former (and likely future) private sector paymasters rather than prioritizing the public interest.  This will not only make Secretary Scalia look bad but also taint any fiduciary rulemaking by the DOL, forever casting a cloud over the resulting rule.  We have called on Secretary Scalia to voluntarily recuse himself from any direct or indirect involvement in any rulemaking related to a fiduciary duty.