“When it comes to the value of what many Americans consider their biggest financial asset, no such return appears in sight.”

“Data released Tuesday showed that seasonally adjusted housing prices have reached a post-bubble low, as the minor surge that began in 2009 fizzled, to be followed by the almost continuous slide of the past 18 months.”

“The housing bust, in other words, appears to be even worse than it was at the nadir of the recession.”

“For millions of homeowners, that’s an unsettling reality, and potentially an issue in the presidential campaign. But the damage may be far more widespread.”

The S&P/Case-Shiller home-price index has fallen in 17 of the past 18 months. The Washington area tracks above the composite index of 20 cities and is down in November after four consecutive increases. 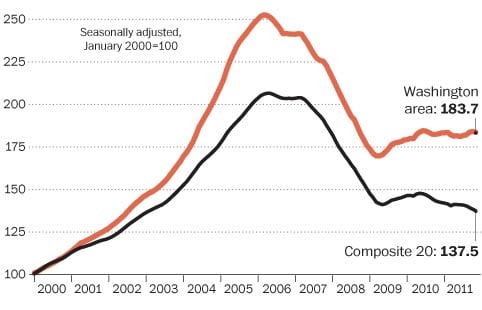