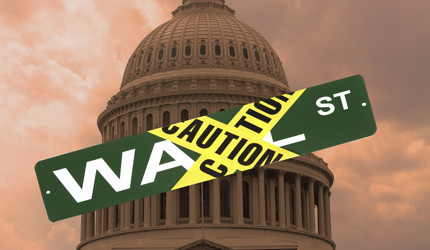 Wall Street hostage taking: Adding another reason for Main Street to hate it, Wall Street and its lobbyists are again working the dark corners of Washington DC to get their political allies to include special interest provisions in must-pass funding bills at the expense of the American people: Funding for the federal government runs out on September 30th unless a new funding bill is passed by both houses of Congress and signed by the President. This “must pass” legislation is key because it enables very important spending that benefits all Americans and the country. For example, it includes the funding for the Department of Defense, including for our troops on the front lines around the world, and for homeland security, including preventing terrorist attacks here at home. It also includes all domestic priorities as well, including health care, the environment, education, research and development, and much more.

This is just what Wall Street did with the funding bill last December (called the “CRomnibus”), which repealed a key protection from dangerous high-risk derivatives trading (called the “swaps push out“). How did Wall Street get that special interest? Wall Street’s too-big-to-fail bank lobbyists got their political allies to attach it to the last year’s “must pass” funding bill. Remarkably, the swaps push out repeal was actually written by Citigroup lobbyists and JPMorgan Chase’s CEO, Jamie Dimon, personally called Congressmen to lobby them to support it. That’s because that special interest provision benefited those two Wall Street trading giants (the four biggest Wall Street megabanks do about 95% of all the derivatives trading in the U.S.) and it put taxpayers on the hook for their highest-risk derivatives dealing.

For Wall Street’s biggest, most dangerous megabanks, it was happy days are here again: they get huge bonuses from high-risk derivatives trading and, like in 2008, they get to shift the costs of catastrophe to the American taxpayer if anything goes wrong. This was an indefensible early Christmas gift for Wall Street’s biggest banks just six years after they caused the worst crash since the Great Crash of 1929 and the worst economy since the Great Depression.

And now, Wall Street’s army of high priced lobbyists are again working Washington day and night to use this year’s spending bill for their gain at the expense of the American people. Wall Street views essential must pass, nationally important legislation as just an opportunity for them to sneak in their wish list of special provisions.

The industry’s lobbyists and allies are using these backroom tactics because they know that their sweetheart deals would never survive scrutiny in the light of day. Too few members of Congress would openly support such special interests as a stand-alone bill, where voters could clearly see who they were supporting: Wall Street, not Main Street. Sticking these provisions in much bigger, more complex, must pass legislation enables them to disguise and hide their support for Wall Street and prevent the American people from knowing what they are up to and holding them accountable.

It is shocking and offensive that Wall Street is willing to put funding for every part of the government at risk, no matter how vital and important, just so it can get what it wants, make more money, and put taxpayers on the hook for high-risk activities. 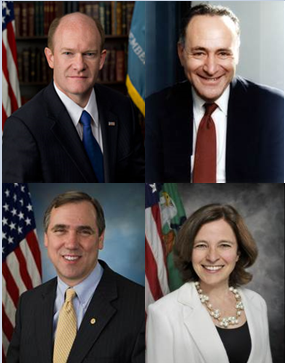 But some are standing up and saying “no” to Wall Street. For example, Senators Schumer, Coons and Merkley joined Deputy Secretary of the Treasury Sarah Bloom Raskin this week and called on Congress to pass a funding bill without dangerous Wall Street deregulation provisions. Deputy Secretary Bloom Raskin pointed out how “We’ve made our financial system stronger and more stable” since the Dodd-Frank Wall Street reform law was enacted five years ago. As Senator Schumer said, “All those cries that Dodd-Frank was going to ruin our economy of course proved not to be true. Dodd-Frank is working.” That’s why, as Senator Merkley said, “There’s still strong bipartisan support for Wall Street reform.” Senator Coons made clear that Wall Street won’t get its way without a fight, saying, “Ideological riders that are designed to roll back Wall Street reform are a non-starter.”

Wall Streets’ special interests and loopholes are not more important than the funding priorities of the American people and their protection from Wall Street . That’s why Congress must pass a funding bill that defends financial reform and protects hardworking families on Main Street. 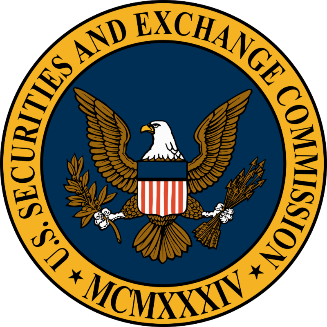 A rule proposed by the SEC would help rein in the corrupt Wall Street bonus culture that incentivizes reckless and illegal conduct: Better Markets filed a comment letter this week supporting a very good rule proposed by the SEC to “claw back” compensation when the firm has or should have restated its financial statements. For too long, compensation practices on Wall Street have been one-way: all upside and no downside. Unimaginably large amounts of money have been pocketed and kept regardless of the consequences, including the failure or destruction of the firm, not to mention threatening the collapse of the financial system and or a second Great Depression.

Breaking that corrupting bonus culture is key if incentives for acting responsibly and legally are to be aligned with self-interest. If you’re going to get the upside in good times, you have to get the downside in bad times. Anything else is just asking for trouble.

In the years leading up to the 2008 financial crash – the worst crash since the Great Crash of 1929 that caused the worst economy since the Great Depression of the 1930s – reckless, illegal and criminal conduct was incentivized by this corrupt Wall Street bonus culture. In fact, for some on Wall Street, the prospect of getting the biggest annual bonus led them to make irresponsible “quick buck” decisions that not only greatly damaged their firms, but also put our entire economy at risk. As a result, as Better Markets has documented, the 2008 financial crash will cost the American people and our economy more than $20 trillion and counting, in addition to the pain and suffering of lost homes, deferred educations and more.

An infamous quote from the CEO of one of the most reckless and irresponsible Wall Street trading giants, Citigroup’s Chuck Prince, captures much of what went so wrong in the suites of the too-big-to-fail banks:

“When the music stops, in terms of liquidity, things will be complicated. But as long as the music is playing, you’ve got to get up and dance. We’re still dancing.”

Pocketing the biggest bonus as fast as possible became almost the only thing anyone cared about in finance, from the lowly mortgage broker to the CEO of the world’s largest too-big-to-fail Wall Street bank. This culture sometimes led to a tendency by some corporate executives to engage in accounting fraud or manipulation to justify this inflated compensation. As one Congressional study of the crisis concluded:

“Even before the current crises, many criticized such incentive plans for encouraging excessive focus on the short term at the expense of consideration of the risks involved. This short-term focus led to unsustainable stock buyback programs, accounting manipulations, risky trading and investment strategies, or other unsustainable business practices that merely yield short-term positive financial reports.”

One way to address this corrupt Wall Street bonus culture is to “claw back” compensation received as a result of misstated financial statements. After all, bonuses are based on, among other things, revenue and profits and, if they are reduced due to a restatement, then the bonuses based on them should be returned. The Dodd-Frank Wall Street reform law required that and that’s what the SEC’s proposed rule implements.

It’s a strong proposal that largely adheres to both the letter and the spirit of the Dodd-Frank law, and Better Markets supported it in a comment letter filed this week. In addition to highlighting the many strengths of the proposal, our letter also advocates for ways the rule can be further improved before it becomes final. You can read the entire comment letter here.​

As our filing makes clear, while not perfect, this rule would help change the dangerous and corrupt Wall Street bonus culture that’s putting our economy and the livelihood of hardworking Americans at risk. The SEC’s top priority should be to resist the inevitable calls from industry opponents to weaken or dilute this generally well-crafted proposal as the process moves forward.

(Better Markets also filed another comment letter this week at the CFTC, supporting its proposal to require margin for uncleared swaps. While complicated, that issue is key to ensuring that many of the risks in derivatives dealing are addressed and don’t get shifted to taxpayers. It also gets at a part of the Wall Street’s latest tactic to evade the law: de-guaranteeing, which was discussed at length in our last Newsletter. Our comment letter can be found here.)​

Following the NYDFS agreement on Symphony, others on Wall Street and elsewhere should follow the lead of Goldman Sachs: Encrypted chat rooms and messaging platforms are the 21st century equivalent of the masks and disguises that criminals have used for years to hide their identities and crimes. Indeed, they have been the preferred means for many working on Wall Street and at the globe’s biggest banks to commit egregious, systemic criminal fraud as proved by the shocking manipulation of the international LIBOR and foreign exchange markets.

Symphony,​the latest Wall Street “innovation” created by and spun out from Goldman Sachs, appears to have a number of useful features for market participants, but it shouldn’t allow banks and other regulated entities to frustrate law enforcement investigations, prevent accountability and avoid the rule of law. Confidential access to messaging systems has enabled prosecutors to identify, investigate and hold wrongdoers accountable in recent years.

That’s why we applaud the New York State Department of Financial Services’ agreement announced this week with four of the fifteen financial firms sponsoring Symphony, including Goldman Sachs, which will help ensure that regulators and prosecutors have access to the information they need to help bring accountability and oversight to Wall Street.

The eleven other financial firms not party to the agreement should follow Goldman’s lead and join the agreement. Moreover, the Department of Justice, the Securities and Exchange Commission and other regulators should scrutinize Symphony, those eleven firms, and any others seeking to use Symphony or similar services to ensure that their investigative tools are not crippled by Wall Street’s latest innovation.

Better Markets in the News:​

DOJ Swears It Will Get Tough On The Next Wall Street Crash: Huffington Post by Zach Carter 9/10/2015

The Retirement Problem that Costs Americans $17 billion a Year: CNN by Thomas Perez and Jeff Zients 9/15/2015

Is Your Adviser Truly Protecting your Retirement?: The Washington Post by Michelle Singletary 9/12/2015

US Exchanges Urged to Act in HFT Debate: Financial Times by Robin Wigglesworth and Nicole Bullock 9/13/2015