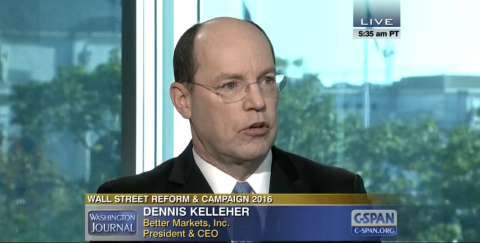 Reframing the debate on the 2016 presidential race, too-big-to-fail, and more: As Presidential candidates continue talking about the unique threat posed by the too-big-to-fail megabanks and detailing their plans to rein in Wall Street to protect Main Street, Better Markets President and CEO Dennis Kelleher appeared on C-SPAN last week to discuss that and more.

Mr. Kelleher helped reframe the conversation surrounding financial reform, pushing back on attempts from the too-big-to-fail banks and their allies to paint those who support reducing Wall Street’s dangerous practices as “bank bashers” that are “beating up on the industry” or “hammering the banks.” He pointed out how there are about 6,500 banks in the U.S. and less than 20 pose a unique threat to our financial system, economy and standards of living. Additionally, as Better Markets has documented, there’s only 33 banks in this country with more than $50 billion in assets and only 24 with more than $100 billion in assets. So in reality, the criticism of Wall Street we’re seeing from Presidential candidates like Sen. Sanders, Gov. O’Malley, Sec. Clinton and others is really focused narrowly on the handful of megabanks, and not the thousands of banks around the country that are serving their communities, providing loans to small businesses and students, and more.

Also during the segment, Mr. Kelleher highlighted how there’s more agreement than disagreement among the Democratic Presidential candidates on key financial reform issues, while many Republican candidates are largely silent on these key issues. One recent notable exception is former Gov. Mike Huckabee’s support for reinstating Glass-Steagall to separate low-risk traditional commercial banking and higher-risk investment banking. As we said at the time, voters deserve to hear from all Presidential candidates on whether they support strong financial reforms, including structural changes to protect Main Street from Wall Street’s high-risk gambling. That’s why Better Markets will keep pressing all candidates to release the concrete, in-depth plans to rein in Wall Street that they would implement as President, so the American people can hold them accountable once in office. 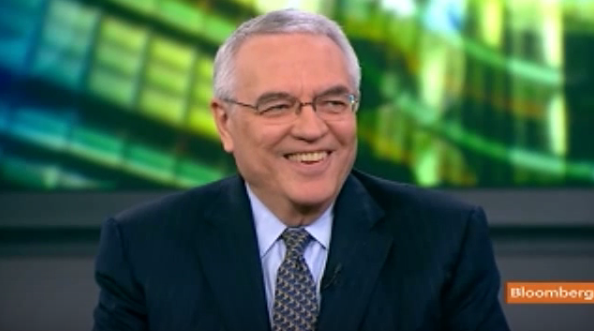 An important new ally in the fight for the DOL’s best interest rule: The fight to implement the Department of Labor’s (DOL) best interest fiduciary rule gained an important ally this week as leading businessman and author Leo Hindery endorsed the proposal in a must-read piece titled, Supporting the Department of Labor’s “Best Interest Rule” Is Good for All Business. Mr. Hindery’s support for the DOL’s rule is the latest example of a leader from the business community speaking out in favor of this common sense proposal to protect Americans’ retirement security.

Mr. Hindery is the former CEO of AT&T Broadband and its predecessors, Tele-Communications, Inc. and Liberty Media, and is the founder of Jobs First 2012. He currently serves as co-chair of the Task Force on Jobs Creation and is a member of the Council on Foreign Relations. Mr. Hindery is also an accomplished author of two books, It Takes a CEO: It’s Time to Lead with Integrity and The Biggest Game of All: The Inside Strategies, Tactics, and Temperaments That Make Great Dealmakers Great.

He’s made good corporate governance and leading with integrity important parts of his work, and he brings that same vision to his support of the DOL’s rule, writing:

“Far too many business leaders today define the success of their company solely by the profit it generates. That’s one reason why so many Americans are losing faith in major corporations – they’re tired of seeing a mentality that puts profit before people, whether those people be the companies’ employees or their fellow citizens. But there’s a decision industry leaders can make today that would send a signal that we’re serious about rebuilding the public trust: supporting a Department of Labor initiative that would finally make doing what’s right for retirement savers the law of the land.”

The piece pushes back on several inaccurate claims made by opponents of this rule, and notes the important work already being done by advisers like Rebalance IRA and Wealthfront, among others, to utilize the latest technology to provide all savers with the low-cost, high quality advice that’s in their best interest. And he notes how the “selfish actions” of those not acting in their clients’ best interest are harming the entire industry.

The leadership shown by Mr. Hindery and the many others in the industry that support the DOL’s rule could help make all the difference as the process moves forward. It’s clear that momentum is building for the DOL to quickly finalize this rule and help millions of Americans retire with dignity and security.

President Bernie Sanders: Bad for bankers, perhaps not so bad for banks: Fortune by Ben Geier 10/21/2015

Wall Street: A Winning Presidential Punching Bag — For Both Sides: The Washington Post by Amber Phillips 10/20/2015

How Not to Fix Fannie and Freddie: Bloomberg View by Antonio Weiss 10/19/2015