A Whistle Blower with the Goods on JPMorgan Chase’s “Massive Criminal Securities Fraud“?: One of the most depressing aspects of the 2008 financial crash is how few whistle blowers have come forward to detail what Wall Street really did to crash the global financial system and how they did it.  That is partly due to separation compensation packages conditioned on nondisclosure agreements.  But, a big part of it is knowing few in authority (the Department of Justice, the SEC, etc.) really care or want to do anything about it plus the inevitable retribution and abuse (as famed author William D. Cohan detailed).

Nevertheless, a brave, knowledgeable insider from the front lines of JPMorgan Chase, Alayne Fleischmann, has now publicly disclosed facts that “shows that these people knew what they were doing and were trying not to get caught,” as one expert put it.  It’s a long article, but you should read Matt Taibbi’s entire incredible Rolling Stone story of Ms. Fleischmann, a former manager who “witnessed one of the biggest cases of white-collar crime in American history.” After eight years of banging on the doors of the SEC and DOJ, she simply could no longer stay quiet watching the investigations basically go nowhere.  Fleischmann is telling her story now to try to “prevent the biggest financial cover-up in history.”

What Explains the Midterm Elections? Look at the Ongoing Economic Wreckage done to America’s families from the 2008 Financial Crash:  The economy is still the number one issue for voters and, as the results show, voters are not happy. Although the stock market is going up and the unemployment rate is going down, those numbers no longer reflect the economic reality for most Americans, as detailed here.  In fact, the economy has never recovered from the 2008 financial crash, which killed growth and jobs while destroying trillions in wealth, as this chart clearly shows: 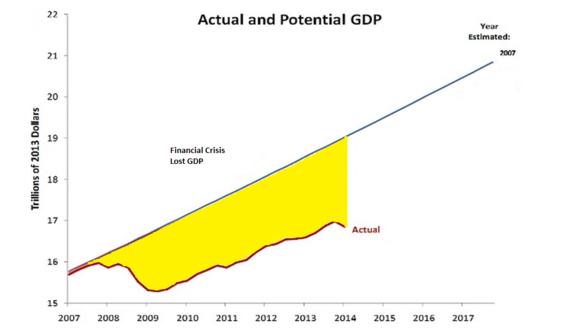 Behind those numbers are the American faces, families, voters and communities suffering from the worst economic distress since the Great Depression of the 1930s, as shown in this Cost of the Crisis report and daily news reports.  As Matt O’Brien wrote in the Washington Post,

“This is scary stuff. Much more than a series of descending lines can really convey. If it’s right, it means that the Great Recession has made us permanently poorer. That the economy will never get back to its pre-crisis trend. Instead, it will stay stuck in a new normal’ of slow growth that feels like a slump-forever.”

Economists like Larry Summers refer to this as “secular stagnation,” which is just a fancy way of saying that the American people are going to continue to suffer from the 2008 financial crash for a very long time.  Preventing this from ever happening again is why financial reform is so important and it is why Better Markets exist:  so that finance supports the economy and is not a threat to it and the well-being of every American.

Sad but True: Another Day, Another Multi-billion Dollar Settlement by the Globe’s Biggest Banks, this Time for Rigging the Foreign Exchange Markets:  It’s hard to keep track of all the illegal and criminal conduct of the globe’s biggest banks because there’s just so much of it.  In fact, an award winner reporter recently tried to get the Department of Justice or anyone else to tell her the total amount of fines, but they just don’t keep track!  That didn’t stop her:  she gathered what information she could and determined that it was more than $143.2 billion (although that’s only the headline number, much of which the banks get to deduct from their taxes so everyone else gets to subsidize their lawlessness).  That was before the $4.3 billion in settlements this week for rigging the FX markets!  But, this won’t be the end.  There’s going to be lots more because Wall Street simply isn’t meaningfully punished for its crimes.  Until it is and until senior executives and officers are personally punished, then the crime spree on Wall Street will continue, and why not, as Dennis Kelleher explained to the Los Angeles Times:

“What it tells you is that there is a culture at the global banks that has no fear of prosecutors or regulators catching them, or if catching them, of meaningfully punishing them ….  If the biggest downside for a bank is that you have to pay a fine – with shareholders’ money that you get to deduct from your taxes – that is the definition of incentivizing more law-breaking and crime.”

A Blank Page on Wall Street Pay in the S.E.C. Rule Book, Four Years Later: Four years after Congress told the SEC to write a rule to recover unearned pay from bankers, called compensation “clawbacks,” no rule has yet been written.  Prize winning New York Times columnist Gretchen Morgenson wrote an excellent piece on this, but the unsatisfactory answer from the SEC was it might get around to it within the next year. Given that everyone knows money is the motivator on Wall Street, you’d think it would take less than five or so years to pass a rule to recover money that Wall Street executives aren’t entitled to.

Why I don’t own bank shares: Everybody should read Terry Smith’s column in the financial times, “Why I don’t own bank shares.” Smith, a former top-rated banking analyst, is wary of investing with banks because he understands how they operate. Smith writes, “One of my basic tenets is never to invest in a business which requires leverage or borrowing to make an adequate return on equity.” Companies that require borrowing or heavy leveraging to survive are going to be more prone to risk when a credit cycle goes bad and there is a “run on the bank”.

Tea Party Populism Is Dead. The GOP Is Back in Bed With Wall Street: New Republic by Alec MacGillis 10/31/2014

Mitch McConnell may be the greatest strategist in contemporary politics: Vox by Matthew Yglesias 11/4/2014

How Congress Crippled the Recovery: Bloomberg View by Mark Whitehouse 10/31/2014