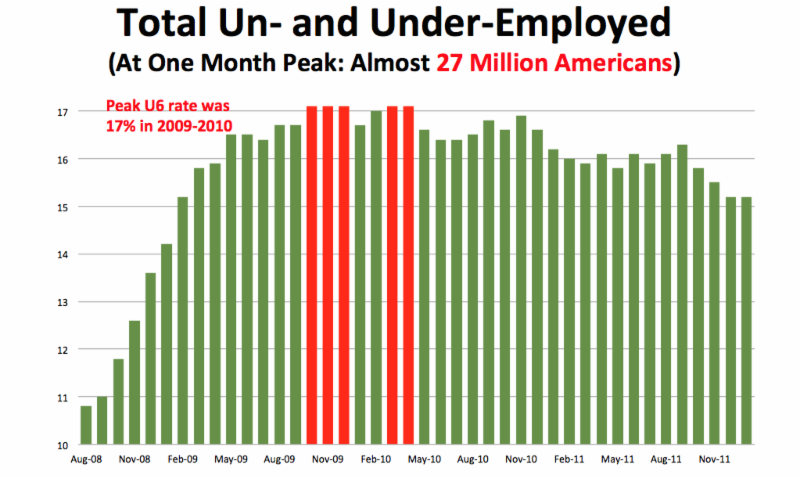 A strong economy that works for all Americans; a balanced financial system that supports, not threatens, the real economy; sensible financial reform rules of the road everyone follows; preventing financial crashes, economic wreckage & bailouts; ending dangerous too-big-to-fail banks, firms & activities: those aren’t and shouldn’t be partisan issues: When the 2008 financial crash hit, it caused massive economic wreckage across the country, hurting tens of millions of American families — regardless of party affiliation. For example, by October of 2009, just a year after Wall Street investment bank Lehman Brothers collapsed into bankruptcy, the unemployment and under-employment rate (the so-called U6 rate) was more than 17%, which meant that almost 27 million Americans were either thrown out of work or forced to work part-time because they couldn’t find full-time work. Housing prices fell to 2001 levels, destroying trillions of dollars of wealth that tens of millions of American families had worked so hard for. More than 16 million American families lost their homes to foreclosures.

That economic catastrophe didn’t just hit Democrats or Republicans; it hit all Americans. That’s why preventing that from happening again should be a priority for all Americans regardless of party affiliation, and that’s why financial reform should not be a partisan issue. That’s also why Better Markets is independent and nonpartisan. We criticize and praise Republicans and Democrats and othersbased on where they stand on the key issues — who and what they are really fighting for — not what party they identify with. Some Democrats and Republicans don’t like that, but we call them the way we see them regardless of party.

That’s also why we continue to build a strong, experienced, bipartisan team: to fight for an economy that works for all Americans and a balanced finance system that serves and supports the real economy and society more broadly. As the New York Times reported this week, Better Markets most recently hired Frank Medina as Senior Counsel and Director of Research. Mr. Medina was Deputy Chief Counsel and Senior Counsel for the Republicans on the House Financial Services Committee for the past seven years and participated in the consideration and drafting of the Dodd-Frank Wall Street Reform and Consumer Protection Act. He also previously worked for Citigroup, the SEC and law firms.

In announcing the hire, Better Market’s President, Dennis Kelleher, said, “[w]ith years of public and private sector experience, in Congress, at the SEC, at a too-big-to-fail bank and prominent law firms, Frank will be instrumental in helping Better Markets promote the public interest in finance and the financial markets…. His deep knowledge of Congress, finance, banking, financial reform and the economy will help us strengthen our financial system and support Americans’ jobs, businesses, homes, savings and investments.”

It should be unremarkable that a Republican or a Republican Congressional staffer is joining the Better Markets’ team and the fight for financial reform. It isn’t because too much of financial reform has become hyper-partisan, which is regrettably due in large part to the special interests at Wall Street’s too-big-to-fail banks and their lobbyists. They have shamelessly exploited and exaggerated political and partisan divisions to advance their agenda of killing, gutting or weakening financial reform. Because those handful of too-big-to-fail banks (less than 20 out of 6,500 banks in the U.S.) are backed by taxpayers and pose a uniquely dangerous threat to the country, financial reform seeks to regulate them so that they cannot crash the financial system again, cannot inflict economic wreckage on the country again and cannot get taxpayer bailouts in the future again. That’s bad for Wall Street bonuses but good for Americans, and that’s why a majority of Americans support stronger regulations holding big banks accountable and reigning in their high risk activities. 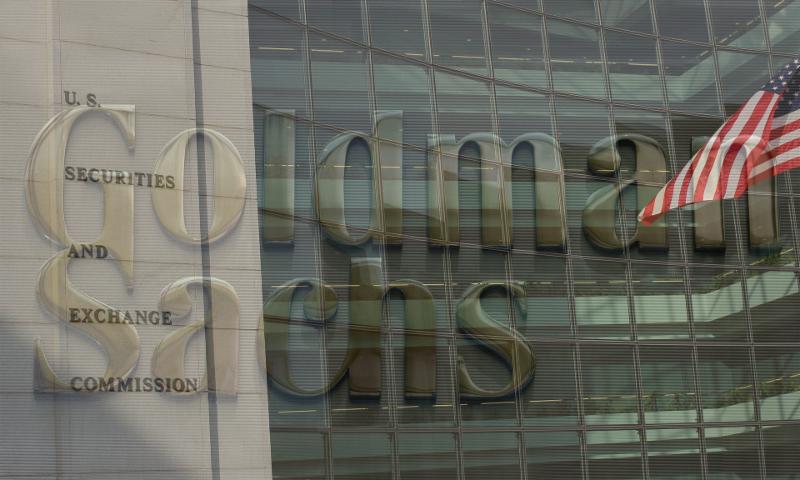 It was wrong for the SEC Chair to hire a Goldman Sachs executive as chief of staff; it further undermines the trust and confidence of the American people & gives Wall Street more influence: The American people are sick and tired – indeed, disgusted – of seeing Wall Street’s too-big-to-fail banks welcomed with open arms in Washington, DC even though they crashed the financial system, received trillions in taxpayer bailouts, caused widespread economic wreckage and brazenly and repeatedly break the law. The SEC’s hiring of a Goldman Sachs executive to be the SEC Chair’s very powerful, very influential Chief of Staff is an affront to the tens of millions of American families who suffered through the 2008 financial crash and are still struggling to recover today.

The revolving door and the pernicious outsized influence Wall Street has over elected officials, policy makers, and regulators are seriously eroding the trust and confidence of the American people in its own government and democracy itself. This hire will only feed that cynicism. After all, this simply is not the only well-qualified person from among 320 million Americans for such an important high government position. Rather than giving Wall Street yet more influence and access, the SEC has to get back into the business of investor protection, fighting for real financial reform and putting the cops back on the Wall Street beat to end the crime spree Americans read about every day.

This is a sad, but glaring reminder of why the SEC isn’t respected or feared on Wall Street. While the agency has made some progress when it comes to chief compliance officers and basic oversight of high-frequency traders, SEC rulemaking has slowed to a crawl, their waiver and enforcement processes are broken, and the agency has largely failed to protect investors or hold wrongdoers accountable, especially executives and supervisors at the biggest, most powerful and most connected Wall Street banks like Goldman Sachs. 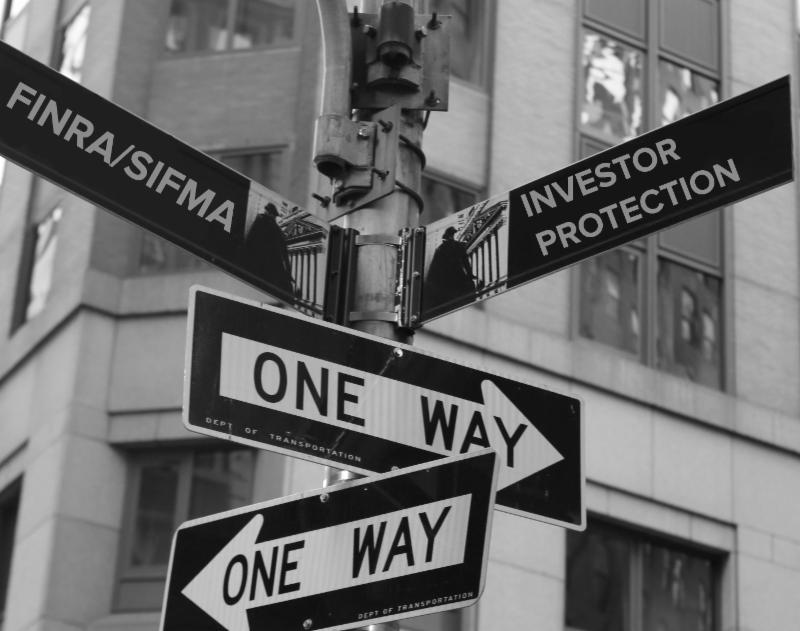 In the face of a retirement crisis in this country, Wall Street’s allies attack the DOL’s best interest rule instead of standing with and protecting hardworking Americans and retirees in support of the proposal: There is a retirement crisis in this country: not enough Americans are saving for retirement and many of those that do aren’t saving enough to retire with dignity and security. All the Department of Labor (DOL) is trying to do is end brokers’ egregious conflicts of interests and require them to put their clients’ best interests above their own when seeking retirement advice. Frankly, that shouldn’t be controversial. In fact, it is hard to believe that the law doesn’t already include such basic, common sense requirements. It doesn’t, and the DOL is battling Wall Street’s power and might to allow their brokers to continue to put their own interests above the best interests of their clients. That’s because – every year – tens of billions of dollars that should be in Americans’ retirement accounts end up in brokers’ pockets and bonuses. That’s wrong and that’s what the DOL is trying to stop.

Richard Ketchum, head of Wall Street’s self-regulator (FINRA), recently came out against the Department of Labor’s (DOL) best interest rule. It is revealing that FINRA, an organization that claims to be “dedicated to investor protection and market integrity,” would be against a rule that would protect Americans’ retirement security by requiring Wall Street’s brokers to act in their clients’ best interest, rather than in the brokers’ own economic interests.

Better Markets President & CEO Dennis Kelleher sent a letter to Mr. Ketchum this week pointing out several major flaws in the Chairman’s recent comments. For example, the letter explains that, contrary to Mr. Ketchum’s statements, “only the DOL can update its fiduciary rule under ERISA so that Americans have access to the unbiased advice they need now more than ever before.” You can view the entire letter here.

Also this week, Wall Street trade group and industry ally SIFMA released a proposal purporting to be a “best interest” standard, but which is really little more than its latest attempt to kill DOL’s proposed rule. As Mr. Kelleher said in response to the proposal, the plan “simply is not a ‘best interests’ fiduciary standard that will protect Americans saving for retirement…Anyone who really cares about workers and retirees in this country should be supporting DOL’s rule, which will require SIFMA’s brokers and others to put their clients’ best interests first.”

Conflicts of interest are costing Americans saving for retirement more than $17 billion every year. That’s what ends up in brokers’ accounts rather than retirement accounts. That’s why Wall Street and its allies like SIFMA are fighting so hard to kill, gut, delay or weaken the DOL rule. Its past time that workers and retirees get investment advice that is in their best interest so they can maximize their hard-earned savings and build a dignified retirement.

All Americans concerned about retirement security need to join in this fight, stand up to Wall Street’s allies and support this rule. Stay informed: go to SaveOurRetirement.com to learn more about this issue. And stay engaged: follow us on Twitter and Facebook for the latest news.

Agency should adopt rule to protect those with IRAs: The Los Angeles Times 5/26/2015