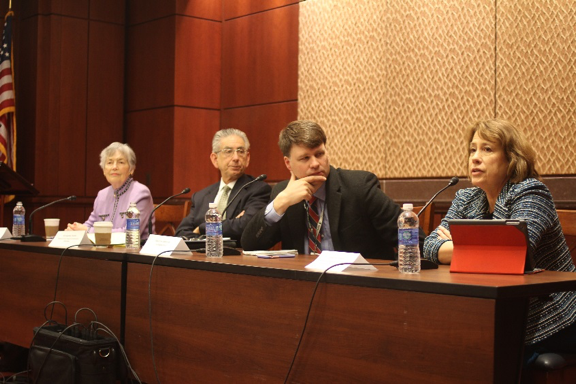 anniversary of Financial Crisis Inquiry Commission’s report as we continue working to prevent a repeat of the 2008 financial crash:There was an important event this week in Washington, DC that shed light on how far America has come – or not – since the devastating 2008 financial crisis.

The financial crash in 2008 was the worst since the Great Crash of 1929 and it caused the worst economy since the Great Depression of the 1930s, ultimately costing hardworking American people more than $20 trillion in lost gross domestic product (GDP).  The Financial Crisis Inquiry Commission (FCIC) was a ten-member bipartisan Commission created by law to “examine the financial and economic crisis that has gripped our country and explain its causes to the American people.”
The FCIC conducted extensive research, examined millions of documents and held public hearings in communities hit hard by the financial crisis. The findings, delivered to the President and Congress on January 27, 2011, concluded that the financial crisis was indeed avoidable and a result of Wall Street greed and recklessness, among other factors. As Chairman of the FCIC Phil Angelides and former Governor and U.S. Senator Bob Graham, a member of the FCIC, wrote this week in a must-read editorial:
“Although we have made some progress, it hasn’t been nearly enough to match the magnitude of the crisis and what the country endured. Disturbingly, some members of Congress already are working to turn back the clock and return to the broken pre-crisis status quo that nearly brought down our economy.”
This event highlighted that fact, and how there is still a long way to go to create a more stable financial system less prone to crash and crisis. It included remarks by U.S. Senator Elizabeth Warren followed by a panel discussion with Phil Angelides, former Chairman of the Financial Crisis Inquiry Commission; Brooksley Born, former Chairperson of the Commodity Futures Trading Commission and a member of the FCIC; and Sheila Bair, former Chairman of the FDIC. 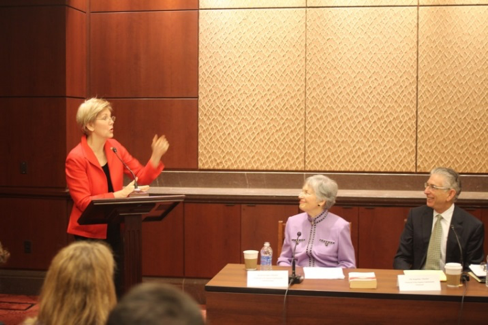 Senator Warren kicked off the event by highlighting the importance of the report, saying, “The FCIC did a tremendous service documenting the causes of the financial crisis.” She went on to discuss the importance of building on the progress we’ve made in the years since the report, saying, “The business of financial reform is not finished.”
During the panel discussion, Mr. Angelides noted that while the country was transformed by this crisis, very little has changed on Wall Street. Ms. Born remarked that the political and financial power of our largest financial institutions continues to be an obstacle to financial reform, noting that the size of the banks is “corrupting our Democratic process.” Unfortunately, as Mr. Angelides said, “There was no moment of reflection on Wall Street” following the crash, with efforts by the too-big-to-fail banks to fight reforms continuing in Congress, at the agencies, and in the courts.
As Better Markets’ Cost of the Crisis Report outlines, financial reform is necessary to rebuild the layers of protections between Wall Street and Main Street, eliminate or reduce Wall Street’s highest-risk, most dangerous activities that threaten hardworking American families, and put Wall Street back in the business of traditional banking to support jobs and growth in the real economy, not to threaten them.

Unless we reflect honestly about the past, we will not make the necessary reforms to prevent another financial crisis in the future. You can learn more about the FCIC here, read the final report here, and read the editorial from Mr. Graham and Mr. Angelides here. 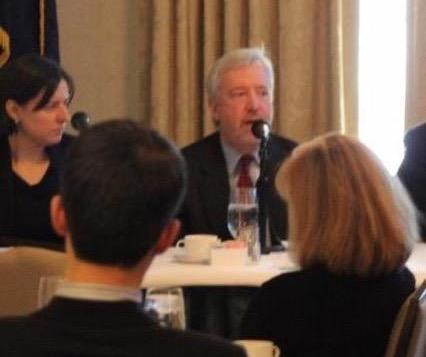 Setting the record straight about the importance of the DOL’s best interest rule: Last week, Steve Hall, Legal Director and Securities Specialist at Better Markets, participated in a lively discussion about the Department of Labor’s best interest fiduciary duty rule hosted by the CFA Institute. The debate, titled “DOL Fiduciary Rule: Implications for Investment Industry”, featured views from all sides discussing this important initiative, with Mr. Hall rebutting the industry’s claims and highlighting the importance of this rule to protect America’s retirement savers.
In particular, Mr. Hall pushed back against the notion that the DOL should wait for the SEC to act before moving forward with this rule, telling the audience that while “the DOL and the SEC can each do an enormous amount to protect investors from conflicts of interest,” the SEC has no authority to update rules under ERISA.  In any case, Mr. Hall added, waiting for the SEC to act means potentially endless delay in protecting retirement savers. As Better Markets has said throughout this rulemaking process, the DOL and SEC have different statutes and mandates, and no SEC fiduciary rule could ever protect all of the assets that retirement accounts can hold, since the SEC only regulates securities. The DOL should not be subordinated to the SEC any more than the SEC should be subordinated to the DOL. Moreover, forcing the DOL to wait for the SEC to act is really just a tactic to delay critical new protections for workers and retirees.
At the event, Mr. Hall also made clear that disclosure alone is not enough, saying, “Disclosure alone doesn’t adequately protect investors – standards are needed.” Independent research shows that an education campaign alone will do little to stop the exploitation of retirement investors. In fact, it may make matters worse, since studies show that disclosure can often confuse investors and embolden brokers to think that, once disclosure has been made, all of their duties are satisfied. Affirmative substantive protections, like the fiduciary best interest duty, not just more fine-print warnings, are essential for investors.
Mr. Hall said it best when he said that the DOL rule has “many strong features and is a critically important step in the right direction.” That’s why all Americans concerned about retirement security should join in this fight. Stay informed: go to SaveOurRetirement.org to learn more about this issue. And stay engaged: follow us on Twitter and Facebook for the latest news.
Better Markets in the News:
This man wants to upend the world of high-frequency trading: Market Watch by Anora Mahmudova 2/2/16
Dimon-led governance project a tough sell Financial Times by Stephen Foley 1/3/16
Articles of Interest:
Barclays Hires New Risk Chief The Wall Street Journal by Max Colchester and Emily Glazer 1/29/16
Credit Suisse, Barclays to Pay $154.3 Million to Settle ‘Dark Pool’ Investigations The Wall Street Journal by Bradley Hope and Jenny Strasburg 1/31/16
Risk of US recession back on the agenda for markets Financial Times by John Authers 1/3/16
U.S. stock market reforms suggested to prevent market chaos Reuters by John McCrank 1/2/16
Wall Street loses Iowa election kickoff: Reuters by Gina Chon 2/2/16