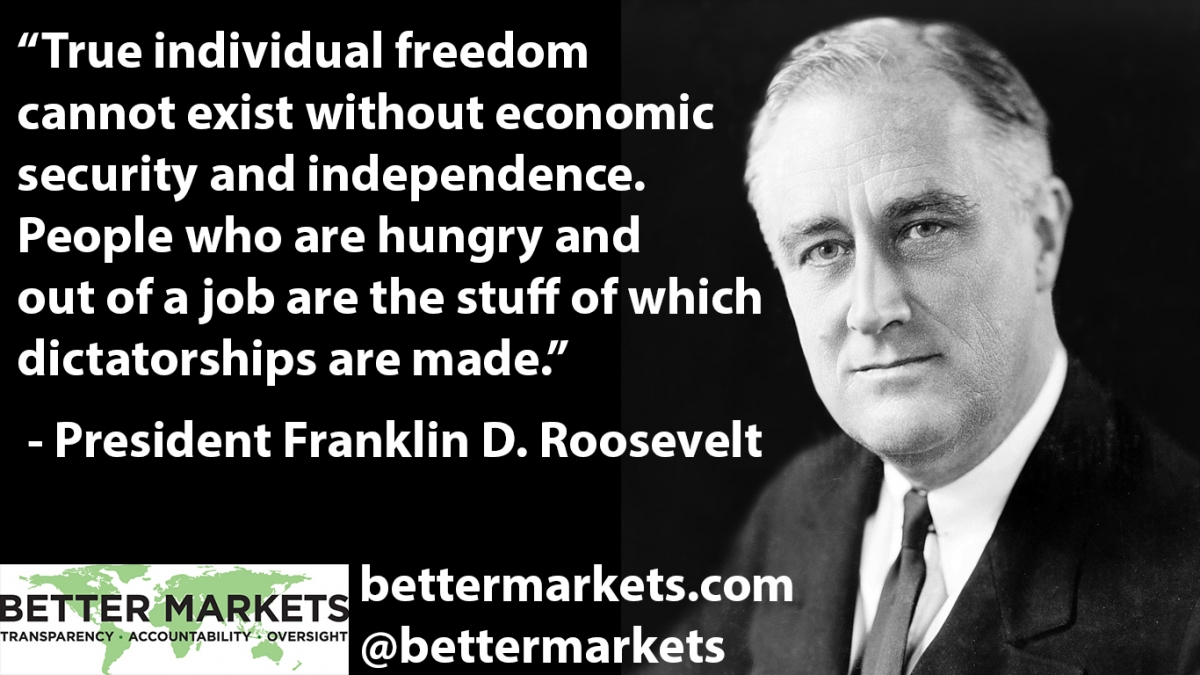 Last week Better Markets participated in a conference hosted by its partner and sister organization Finance Watch in Brussels. President and CEO Dennis Kelleher delivered a speech that outlined the challenges facing financial reform advocates and reminded the audience of why financial reform is not only crucial to global economic prosperity and stability, but a necessary condition for achieving those goals. Echoing a speech by Better Market’s Senior Fellow Bob Jenkins when he was at the Bank of England’s Financial Policy Committee, a key focus of Mr. Kelleher’s speech was countering the false choice that society must choose between economic growth and financial stability. The handful of dangerous too-big-to-fail Wall Street banks have long opposed regulation by stoking the fear that it will unfairly burden banks and brokers, hinder capital formation and credit availability, and thereby slow economic growth. But as Mr. Kelleher’s speech details, nearly a century of history shows that just the opposite is true.

In the midst of the Great Depression of the 1930s, following the Great Crash of 1929, Congress adopted a series of major structural and regulatory financial reforms embodied in numerous banking and securities laws. What followed – for about 70 years – was a thriving financial services industry, robust financial market growth, and widespread prosperity-an era known as the “Golden Age of Capitalism.” However, de-regulation became increasingly popular in the 1980s and 90s, culminating in the repeal of the Glass Steagall Act in 1998 and the Commodity Futures Modernization Act in 2000 that prohibited the regulation of derivatives.  This led directly to the 2008 financial crisis, the greatest financial catastrophe since the great depression. The financial crash and economic wreckage it caused is going to cost the US more than $12.8 trillion in loss to GDP and millions of people’s jobs, homes, and livelihoods.

Thus, about 70 years of stability, growth, and security under the heaviest regulation of the financial industry in history followed by just 7 years of virtually total de-regulation leading to the biggest financial crash since 1929 and almost causing a second Great Depression. The evidence is clear: Financial stability and security leads to greater economic growth and broadly shared prosperity, whereas de-regulation leads to crisis, huge losses in productivity, and massive human suffering. 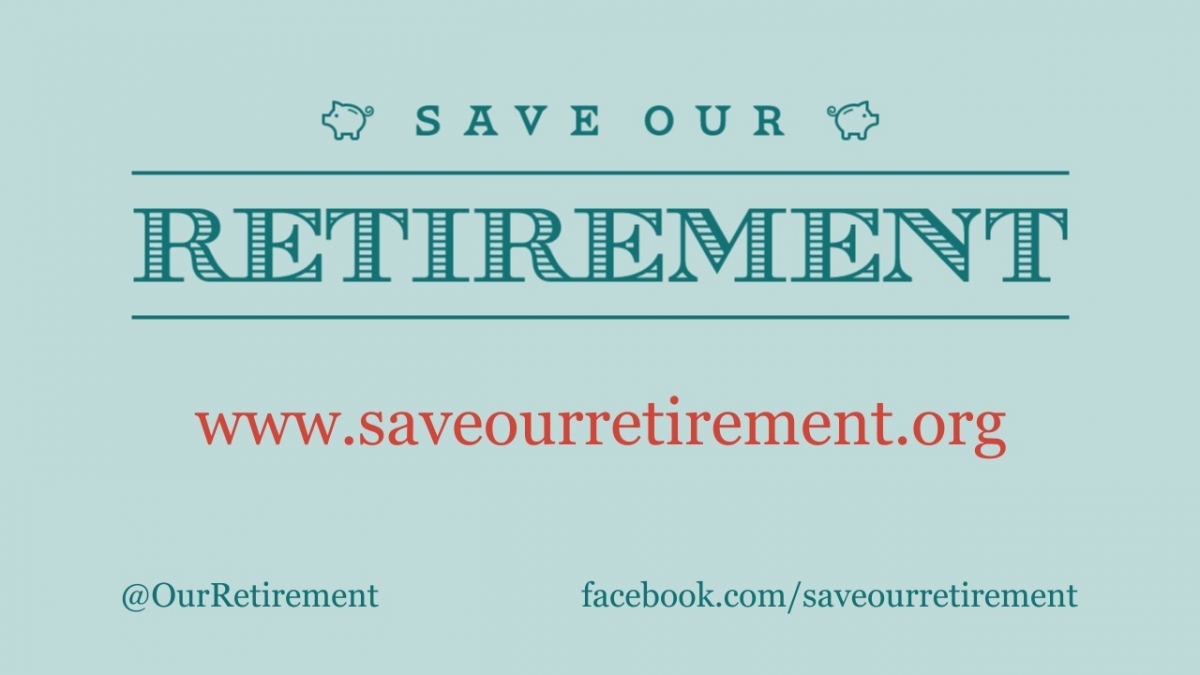 The Fight to Save Our Hard Earned Retirement Savings Continues
When you consult your doctor, you deserve and expect medical advice that is in your best interest, not treatments that pay secret kickbacks to the doctor but don’t work or even make you sicker. The same is true when you need legal advice. Although it comes as a shock to most people, many financial advisers are not held to the same professional requirement imposed on doctors and lawyers: that they act in the best interest of their clients.  In fact, the current law, which is 40 years old and full of loopholes, allows them to put their own interest above the interests of their clients. As a result, millions of American workers and retirees are losing thousands of dollars in retirement savings to advisers who recommend investments that pay handsome commissions but bleed off savers’ hard-earned money.
That’s why the U.S. Department of Labor is working hard to update its 40-year old rules governing financial advisers. If done right, the updated rule will require everyone who gives advice about retirement assets to put their clients’ interests first, and to recommend products because they best serve the clients’ needs, not because they are good for the adviser. Many advisers do this already and the new rule won’t affect them. However, too many do not and too many in the financial services industry are fighting hard against an updated rule, so it is vitally important for everyone with a stake in the issue – and that is everyone who is saving for retirement or whose parents or other relatives are saving or retiring – to support the DOL’s effort to put out a strong rule. SaveOurRetirement.com is a single, central location to learn more about this issue and to see what you can do to help this process along. Follow on Twitter and on Facebook as well. And, sign this petition to let the White House and Congress know you care about protecting retirement savings from conflicts of interest.
Financial Firms that Break the Law Should Be Meaningfully Punished Just Like Everyone Else
When financial firms violate the law, they automatically lose the right to engage in certain types of financial activities, unless a regulator finds there is good cause to grant a waiver from those “bad actor” disqualifications. For too long, and without public transparency, agencies like the SEC have routinely granted those waivers, especially to the largest banks, with few or no meaningful conditions attached. Lately, this practice has drawn criticism, and hopeful signs are emerging that these waivers will no longer be granted almost automatically. For example, the DOL recently held a public hearing to determine whether a waiver for Credit Suisse should be granted at all (Better Markets submitted acomment letter, supporting DOL’s transparent process). Even the SEC seems more inclined to impose conditions, including 30-month reviewsand the appointment of corporate monitors to ensure that conditions are being followed.

This week, however, the SEC took a big step backward by granting a virtually free and clear waiver to Oppenheimer, which settled a $20 million enforcement action for violations relating to penny stock transactions, anti-money-laundering provisions, and unregistered brokerage activity. SEC Commissioners Stein and Aguilar filed a strong joint dissent against the waiver. They cited numerous problems with the waiver: it lacks meaningful provisions to ensure the independence of the monitor responsible for overseeing Oppenheimer’s compliance; it does not require oversight by top-level management; and it imposes no requirement that Oppenheimer return to the SEC after an interim period to show that the waiver continues to be warranted. In fact, citing Oppenheimer’s long history of violations and its “wholly failed compliance culture,” Commissioners Stein and Aguilar questioned whether any waiver – let alone one with weak conditions – was appropriate.We hope this recent waiver is an anomaly, and that the SEC takes far more seriously its obligation to carefully and thoughtfully determine whether such waivers are appropriate, and if so, under what conditions.

On January 30, FSOC and OFR Hosted a 2015 Conference Devoted to Evaluation of Macroprudential Tools
The participants, which included Better Markets, discussed the challenges of stress testing, approaches to resolution and recovery, liquidity regulation, and limits to leverage via margins and haircuts. Among many topics addressed at the event, a noteworthy presentation was the discussion by Professor Calomiris about the currently high real estate loan concentration that potentially presents a financial stability risk. During the second panel, Ceyla Pazarbasioglu of the International Monetary Fund introduced a discussion on clearinghouse resolution and recovery that contained more questions than answers but nevertheless was a helpful step forward in addressing what many believe may have global financial stability implications. The conference is available to view here.

Banks May Have Overplayed Their Hand Fighting Wall Street Regulation: