Washington’s Wall Street Problem: A Wall Street financier has been nominated by the Obama administration for a senior, powerful position at the Treasury Department: Undersecretary of the Treasury for Domestic Finance.  Unsurprisingly, this has generated controversy and, unfortunately, too much unbalanced commentary and reporting, not to mention indefensible name calling and undignified attacks.  No, not by the pejoratively mislabeled “left,” whoever that is, but by the defenders of Wall Street, the administration and the nominee, Mr. Antonio Weiss, who dismissed critics with the current worst-of-all insult masquerading as a mere appellation: “populists.”

The editorial page of the Washington Post goes so far as to compare these pretty mild critics and criticism as nothing less than a McCarthyite “populist witch hunt.”  Really?  Whatever happened to discussing the merits and substance of disagreements and debates without pejorative (mis)characterization, misleading pigeon-holing and name calling?  This is little more than caricature camouflaged as reporting, an argument or a discussion (even if under the guise of editorial opinion).

We will have more to say about this later, but for now read Sen. Elizabeth Warren’s critique of the Obama administration’s nomination of Mr. Weiss: “Enough is Enough: The President’s Latest Wall Street Nominee.”  Then read what can only be viewed as a remarkable over-the-top response of the New York Times’ Andrew Ross Sorkin, who refers to this as “ferocious opposition,” “wrath” and “rage” from Sen. Warren, who he variously described as “furious,” “unhappy,” “mistaken,” and “misinformed”: “Senator Elizabeth Warren’s Misplaced Rage at Obama’s Treasury Nominee.”  (Using Mr. Weiss as an exemplar of public service, you might also want to read Mr. Sorkin’s more recent railing against yet another “populist shakedown” here, but make sure to also read the comments section on both these columns for some perspective and balance.)

It is noteworthy that Mr. Sorkin and other defenders of Wall Street, the administration and Mr. Weiss focus on Sen. Warren, but fail to mention the widely reported opposition of the Democratic Senate Majority Whip, Sen. Dick Durbin (presumably, not fiery enough) or equally widely reported opposition of the very mainstream Independent Community Bankers Association (ICBA).  Both were reported on days before Mr. Sorkin’s column in his own Dealbook at the New York Times.  Using Mr. Sorkin’s prism, someone might think that the attacks on the so-called attackers might just be  “nice sound bites” and “campaign talking points.”  Indeed, it has been suggested that this seemingly genuine rage and overheated rhetoric grossly disproportionate to what was actually said by Sen. Warren might just be designed to whip up targeted audiences into a frenzy of opposition activity, i.e., literally campaign talking points.  Given how widely read and circulated Mr. Sorkin is, one might wonder if this was a call to arms to fellow-believers to get to the ramparts to fight back the “populists” attackers/invaders of the Wall Street citadel?

Wall Street’s Biggest Global Banks Are Again Doing Well, But At The Expense Of The More Than 6,000 Community Banks, Which Provide The Majority Of Lending To Small Businesses In The US: On November 25, 2014 the FDIC released the Third Quarter 2014 Quarterly Banking Profile.  FDIC Chairman Martin Gruenberg reported that “the banking industry had another positive quarter. Net income was up, revenue growth was relatively strong and broad-based, asset quality improved, and loan balances grew. Fewer institutions were unprofitable and there were fewer problem banks.”  That’s the good news.  The bad news (as the chart below shows) is that the share of industry assets held by the largest banks is still above 80% with the smaller institutions consistently losing their share of assets. 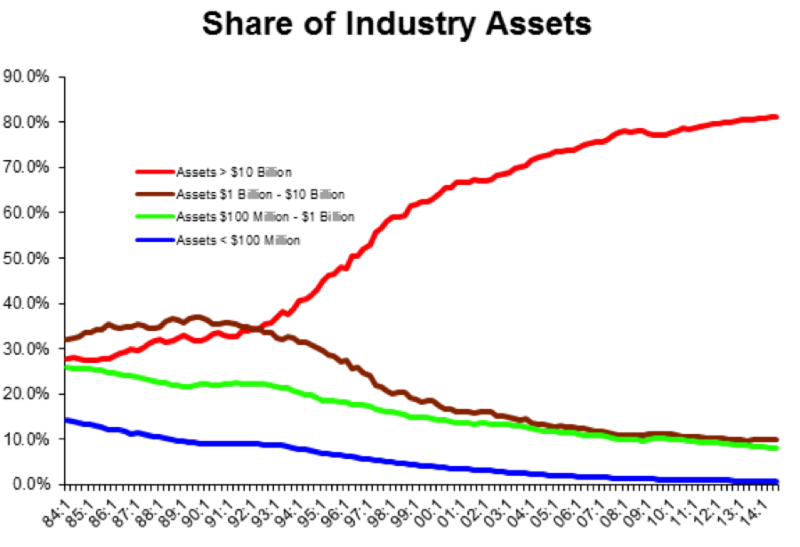 This is important for jobs, the economy, growth and standards of living because, as an earlier FDIC analysis stressed, “community banks are disproportionately important providers of credit to small businesses and serve hundreds of countries and thousands of communities that are overlooked by larger non-community institutions.” This highlights that the smaller banks continue to be engaged in traditional bank activities like lending, and that the megabanks are still engaged in higher risk activities of questionable economic benefit to the country.

Putting Financial Reform In Place to Protect America’s Workers, Families, Communities, Taxpayers, Financial System And The Economy: Better Markets continues to work on rules proposed by regulatory agencies to implement the financial reform law, passed 4 years ago, in response to the crash, now more than six years ago. These rules are essential to preventing another financial crash, taxpayer bailouts for Wall Street and yet more economic wreckage inflicted on the American people.  Within just the last week, Better Markets has filed three comment letters on various rulemakings:

First, Better Markets submitted comments to banking regulators (the Federal Reserve Board, OCC, FHFA, FDIC and FCA) on the proposed rulemaking for margin and capital requirements for swap dealers. The comments emphasized the importance of the universal two-way margin requirements, proper treatment of commercial end-users, affiliates, and investment funds, as well as danger of certain foreign subsidiaries to avoid the margin regime under the proposed rulemaking.

Second, Better Markets filed a comment letter with the Financial Stability Board, in Switzerland, identifying necessary steps for addressing too-big-to-fail financial institutions, including reducing their size and complexity, implementing a statutory framework for cross-border resolution of large financial institutions, and suggesting requiring non-salary executive compensation at such institutions be paid in the form of bank holding company equity and bail-in debt.

Third, Better Markets filed a comment letter with the CFTC highlighting the importance of a strong margin regime for uncleared swaps, and arguing for enhancements in their proposed rule relating to margin models and collateral, cross-border margin requirements, and the approach to economic analysis.

Better Markets In The News:

So banks are too big to fail. Are they also too big to regulate?: The Guardian by Robert Jenkins, Senior Fellow at Better Markets 11/28/2014

Attention Insider Traders: These Wall Street Vets May Have The Tech To Nail You: Forbes by Richard Behar 12/02/2014

Why Regulators Think the System Is Even Riskier in 2014: American Banker by John Heltman 12/2/2014

This is why the middle class can’t get ahead: PBS Newshour by Nick Hanauer 12/1/2014