Watch our new video to learn how Better Markets stands up to too-big-to-fail banks and fights for you:

A landmark guilty verdict in a London-based LIBOR trial should be just the beginning of individual accountability in global finance: A jury this week handed down a guilty verdict in the LIBOR trial involving former UBS Group AG and Citigroup trader Tom Hayes. The guilty finding and unexpectedly long 14 year sentence sent a shocking jolt through the lawless culture that’s become corporate policy at some of the largest mega banks in the world. This is an all too rare moment of accountability for the reckless, illegal, and criminal conduct by too many of those working at the biggest too-big-to-fail banks.

But, the corrupt culture at too many of the world’s biggest banks will only truly change when holding individuals accountable becomes the norm and not a “one off” or the exception. We know from Hayes’ testimony during the trial about the bank’s “instruction manual on fixing Libor,” how “Libor-rigging was standard operating procedure during his time at UBS,” and how commonplace it was throughout the industry, generating billions in revenues and tens of millions in bonuses. It’s clear that executives were a part of this firm-wide failure of legal, risk, compliance, supervision and management. That’s why this verdict should be just the beginning of holding individuals – including supervisors and executives – responsible for their wrongdoing. Only if that happens will the rule of law be restored in global finance.

Crimes of finance are not victimless crimes. This “lie-more” scandal ripped off millions of Americans and affected everyone from mortgage holders to municipalities issuing bonds to investors with floating-rate financial products. It also further corrodes the public’s trust in banking, finance and markets at a time when many Americans are still struggling to recover from the Wall Street-caused 2008 financial crisis. Holding individuals personally liable and accountable is not only the right thing to do, but it will also help restore public confidence.

Rebutting the manufactured liquidity hysteria: The ability of industry to use the liquidity threat as a powerful lobbying tool relies on a pervasive misunderstanding of liquidity and its role in various markets. It’s one of the most used, misused and abused terms in all of finance, as some in the industry promote their unfounded claims that many/most/all regulations protecting investors and the markets will “harm liquidity,” damage markets, and make everything more expensive for small businesses, farmers, and families on Main Street.

Better Markets President and CEO Dennis Kelleher spoke at a Brookings event this week titled, “Are there structural issues in U.S. bond markets?” Mr. Kelleher rebutted the manufactured liquidity hysteria, detailed the facts, and discussed how the real issues are risk and risk management, not regulation. You can view his presentation here. 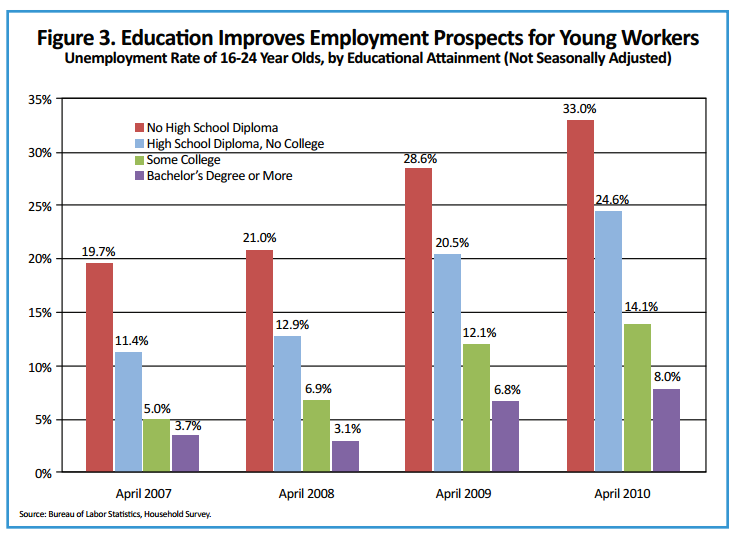 Millennials are paying a high price as a result of the 2008 financial crash: A recent opinion piece in the New York Times, We’re Making Life Too Hard for Millennials, highlighted how “[t]he most educated generation in history is on track to becoming less prosperous, at least financially, than its predecessors,” in large part due to the lasting impacts of the 2008 financial crash. As Mr. Rattner writes, “[t]hose who graduate in weaker economic times typically earn less than those who enter the work force during more robust periods. Starting behind often means never catching up.”

Many people have a hard time understanding how the 2008 financial crash and the economic catastrophe it caused effected or effects real people. This is a perfect example of the unseen and ongoing damage inflicted by Wall Street’s recklessness.

As Better Markets’ Cost of the Crisis report outlines, those entering the job markets after the 2008 financial crash were among the most deeply impacted. Two years after the crash, in 2010, nearly one in five 16- to 24-year-olds was without a job, the highest unemployment figure in this group since the Census Bureau began reporting numbers in 1947. As pointed out in the opinion piece, student loan debt – incurred as many went back to school since they couldn’t find jobs as a result of the economic downturn – is further dragging down graduates. Today’s younger Americans are taking on more student loan debt than any generation before them, delaying major life milestones such as buying a home and starting a family. This debt is also threatening older generations, who need a large and growing workforce paying into social safety net programs such as Medicare and Social Security.

You can read the op-ed here, and you can read our analysis of how the 2008 financial crash’s impact on millennials here. For a look at how the financial crash will cost Americans more than $20 trillion, download our Cost of the Crisis report here.

Failing to acknowledge the historic depth and breadth of the financial crisis and the economic catastrophe it caused is nothing more than political propaganda by Wall Street’s allies: Repeating a common (often intentional) misleading comparison, the Wall Street Journal’s recent editorial, The Six-Year Slough, failed to acknowledge that the 2008 financial crash was the worst collapse since the stock market crash of 1929 and that it caused the worst economy since the Great Depression of the 1930s. That’s why it’s called the “Great Recession” and why comparing it to the much milder recessions of the early 1980s or 1990s is misleading.

A second Great Depression was only avoided after the 2008 financial crash due to unprecedented, historic, and very costly government and taxpayer bailouts for too-big-to fail Wall Street banks and the financial sector. After the worst financial and economic shock to the country in 80 years, it should surprise no one that the economy is still weak and many Americans across the country are still suffering from the impact in lost jobs, homes, security, and more.

As our new Cost of the Crisis report outlines, the 2008 crash and its fallout will ultimately cost Americans more than $20 trillion in lost gross domestic product. Those losses reflect the crash-caused historically high unemployment and underemployment, foreclosures, bankrupt businesses, and so much more. For example, the U-6 rate peaked for five out of seven months between October 2009 and April of 2010 at 17.5% — or almost 27 million Americans — which is equal to the entire population of the state of Texas. This rate takes into account not just people who are unemployed, but also people who are underemployed (forced to work part-time because they couldn’t find full-time work) and people so discouraged that they’ve stopped looking for work. 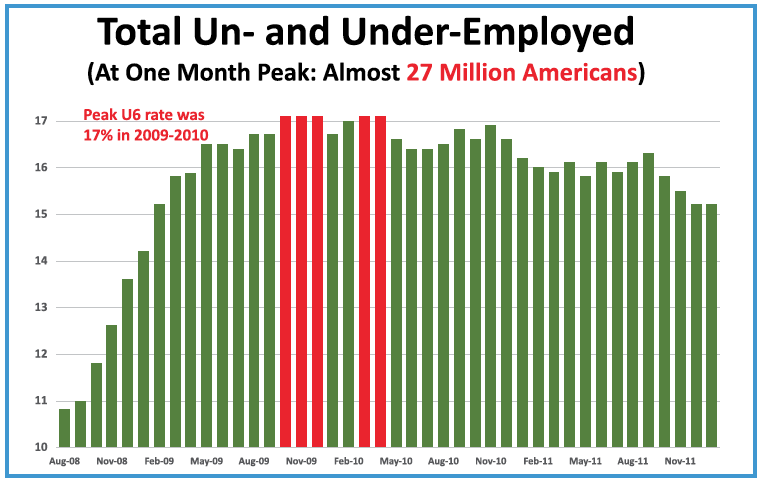 Many of those 27 million Americans were heads of households, which means that the impact of this touched more than 50 million American families. That is just one example of the economic wreckage caused by the historic crash. That is why it is misleading to compare the 2008 financial crash to anything other than the Great Depression.