Fact Sheet: Return of the CLO Attack on the Volcker Rule

Just weeks after receiving a green light to once again trade high-risk derivatives with taxpayer support in the 2014 Omnibus, Wall Street and their allies are seeking to carve another loophole in Dodd-Frank. This time they are seeking an additional two years to come into compliance with key provisions of the Volcker Rule, a move that Mr. Volcker has criticized as nothing more than a ploy by the big banks to pad their bottom lines.

The Volcker Rule prohibits banks from engaging in proprietary trading and further limits banks from owning shares in funds that do proprietary trading such as hedge funds and private equity. To provide time to come into compliance, the Volcker Rule required the biggest banks to sell off their existing holdings of these funds within 2 years, and allowed the Federal Reserve to grant up to 3 additional 1-year extensions, which it recently has done. This means that the big banks will not have to divest these holdings until 2017, almost seven years after the passage of the Dodd-Frank Act, which is more than enough time to adequately dispose of these holdings without damaging the market. Despite this indefensibly long timeline, the banks are asking for even more time when it comes to one kind of fund in particular: “collateralized loan obligations” or CLOs.

CLOs are investment funds that consist of “leveraged loans,” (huge corporate loans with low to very low credit ratings) which can be swapped in and out by the manager throughout the life of the fund. CLOs are NOT backed by loans to small business or individuals, but rather are typically composed of the debt that companies incur after being taken over by a private equity firm.

The biggest Wall Street banks were large holders of these products before, during, and after the financial crisis. In fact, according to SNL Financial, 69% of US bank-held CLOs are owned by just four banks: 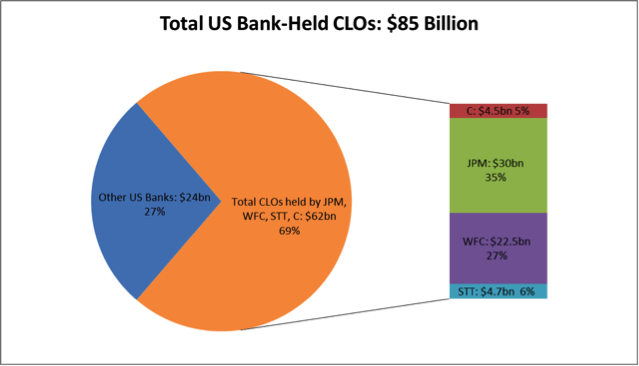 Some have argued that this provision would unduly burden community banks. However, as the data indicates, large banks hold the overwhelming majority of these investments.
Importantly, the specific features of CLOs (its maturity, the kinds of investments it can make, the rights and protections for each class of investor, etc.) are not publicly disclosed or standardized, so it is impossible to know how many CLOs exist with any given feature.

What does this have to do with the Volcker Rule?

The Volcker Rule prohibits proprietary trading and limits bank ownership of hedge funds. Bank investments in CLOs have the potential to be both a proprietary position and an investment in hedge funds because investing in a CLO is functionally identical to owning part of a hedge fund that invests in leveraged loans. Importantly, the Volcker Rule already provides both ample time to divest these sought-after instruments, and a variety of ways to bring existing CLOs into compliance with the rule. Specifically, CLOs backed entirely by loans are excluded from the Volcker Rule and many CLO holdings are not considered “ownership interest” under the Volcker Rule.

However, one way banks can take proprietary positions through a CLO is by investing in a CLO that is partially composed of both loans and other types of non-loan assets. For instance, a $10bn CLO comprised of only $6bn in loans and $4 billion in other assets can proprietarily invest those $4 billion in any asset or assets (risky sovereign debt, junk bonds, structured derivatives, credit default swaps, or even other risky CDOs) without violating the Volcker Rule. It is irrelevant which instruments have traditionally been included in CLO’s – surely in a post Volcker Rule world, risky proprietary trading will find its way into any vehicle that will allow it. For this reason, bank investments in CLOs may violate the law’s ban on high risk activities (the Volcker Rule), and to come into compliance with the law, banks may have to sell their existing CLO holdings.

A provision of H.R. 37 would provide these big banks with an additional two years to divest their non-conforming CLO holdings. Doing so is nothing more than a brazen attempt by these banks to continue speculating in risky products with taxpayer funds.

Some have contended that this provision would harm liquidity and result in banks having to sell these investments at fire sale prices. That ignores the fact that according to SNL Financial many of those same banks have recently increased their CLO holdings despite the requirements of the Volcker Rule. Clearly, these banks believe that there is either substantial time to dispose of non-compliant CLOs or simply have no intention of meeting the regulatory requirement. As such, extending the conformance deadline simply allows more time for this backdoor proprietary trading to continue.