Fact Sheet on the Jamie Dimon/JP Morgan Chase Settlement with the Department of Justice
The reporting on the possible JP Morgan Chase settlement with the Department of Justice has focused on the seemingly very large number of $13 billion as well as how unfair it is to JP Morgan and Jamie Dimon, who purportedly bought Bear Stearns and Washington Mutual to help the country during the 2008 financial crisis.
The following facts are discussed below:
1.       JP Morgan Chase is getting special treatment for liabilities related to Bear Stearns and Washington Mutual even though they were fabulously successful and profitable acquisitions for JP Morgan Chase.
2.       A $13 billion settlement may not be much at all and may be far too small for egregious, widespread wrongdoing and illegal conduct at JP Morgan Chase.
3.       It’s not really $13 billion because only $9 billion is in cash, much of that may be tax deductible and some may be shifted to the FDIC.
JP Morgan is getting special treatment for the illegal actions of Bear Stearns and Washington Mutual even though they were fabulously successful and profitable acquisitions for JP Morgan.
Ignoring for a moment that most of the reported matters being settled have nothing to do with the purchases of Bear Stearns and Washington Mutual, Dimon, JP Morgan and its many allies and supporters have claimed that it would be unfair to punish it for the illegal conduct of Bear Stearns and Washington Mutual. They claim to have bought those firms at the request of the government and as a public service during a crisis.
As a result, DOJ is reportedly giving JP Morgan special treatment: no punishment related to those two firms. While the reports say that JP Morgan is going to have to give up some ill-gotten gains from the activities of those two firms as compensation to investors (reportedly less than $2 billion), there will be no other penalty or fine associated with any of their activities.
That doesn’t make sense because JP Morgan acquired those firms knowing full well that they were purchasing the assets and liabilities as is typical and standard industry practice, a practice which JP Morgan has followed for decades. Dimon, JP Morgan and their army of bankers and lawyers made business decisions in 2008 to buy those two firms based on what was best for JP Morgan. They made sophisticated and informed risk/reward calculations that have paid off fabulously well (even if the settlement is much more than reported $13 billion).
While some have claimed that these purchases were hurried and Dimon’s interest was selfless, that ignores the facts. As detailed by the New York Times’ Peter Eavis and many others, Dimon and JP Morgan had wanted to buy Washington Mutual long before September 2008 and wanted to buy into the lucrative prime brokerage business long before buying Bear Sterns in March 2008.
When these once-in-a-lifetime opportunities came along at fire sale prices, Dimon and JP Morgan jumped at the chance to buy them, literally, for next to nothing. Bear Stearns was bought for less than $1.5 billion, which was about the same as the value of just its headquarters building on Madison Avenue in New York. And, Dimon bought Bear Stearns only after demanding that the US government assume the risk of $30 billion worth of toxic and presumably worthless mortgage securities.
Given the pittance paid for all of Bear Stearns and off-loading the most toxic securities, Dimon and JP Morgan got a sweet deal that, by any measure, has been fabulously profitable. The same is true for its purchase of Washington Mutual and its extensive branch network and hundreds of billions of dollars in sticky, cheap deposits (which ironically provided the capital for the London Whale trade). Among other things, JP Morgan also immediately wrote down Washington Mutual’s assets by $30 billion to reflect future losses.
It cannot be denied that one of the reasons – and probably one of the very big reasons – JPM has reported quarterly profits throughout the entire crisis, crash and recession is because of those acquisitions.
How lucrative have Bear Stearns and Washington Mutual acquisitions been for JP Morgan?
One measure is book value. As Bloomberg’s Erik Schatzker has reported, JP Morgan’s book value has increased by an astonishing $36 billion since Bear Stearns and Washington Mutual were acquired. But there are also many other ways to see how amazingly profitable and successful these acquisitions were, as demonstrated in the following chart: 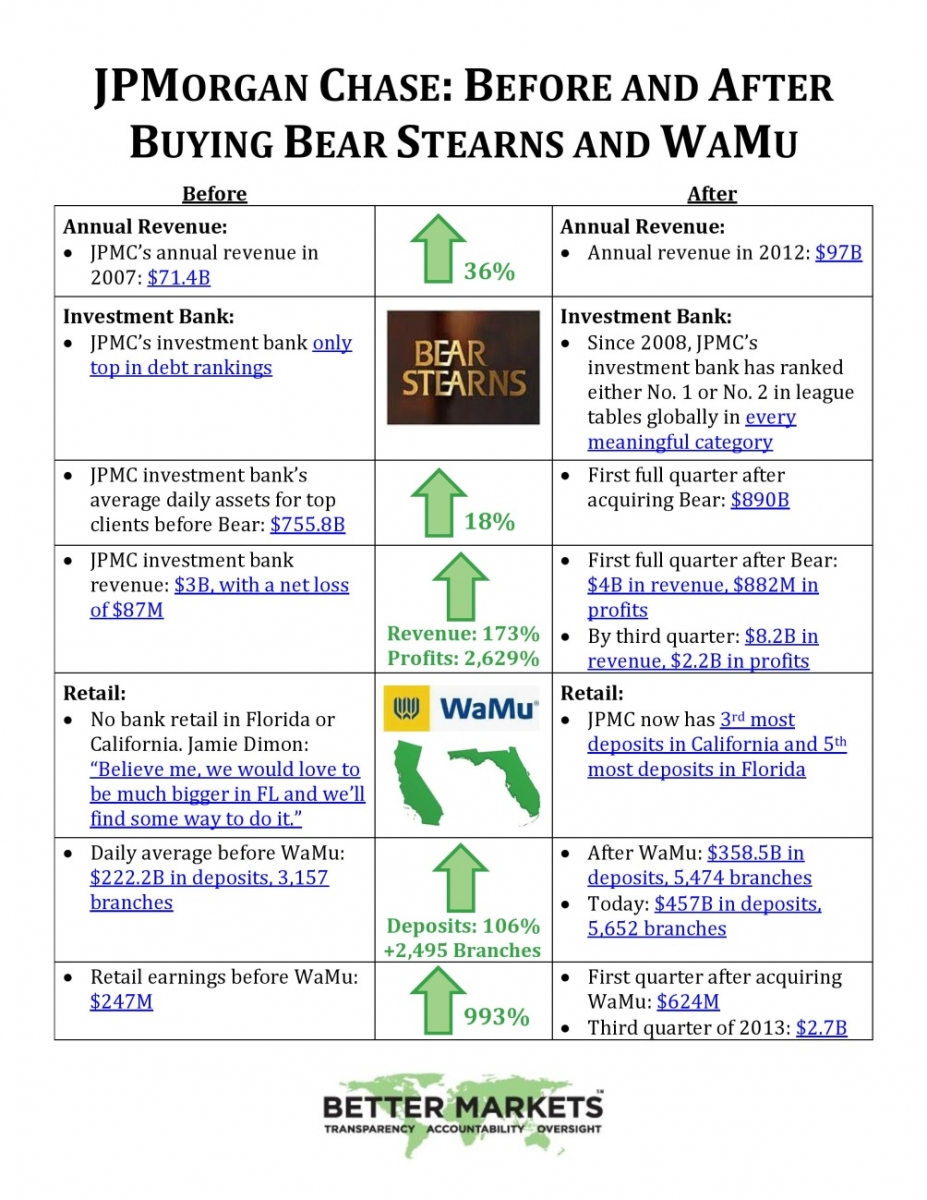 A $13 billion settlement may not be much at all and may be far too small for egregious, widespread wrongdoing and illegal conduct at JP Morgan Chase.
While $13 billion sounds like a lot of money, it really depends on the details of the many investigations and lawsuits being settled, including specifically how much economic damage was done and the amount of ill-gotten gains received. For example, the FHFA alone is suing JP Morgan for $33 billion and the trustee in the Bernie Madoff Ponzi scheme is suing JP Morgan for $19 billion. There are many other investigations and lawsuits for similar and larger amounts, as JP Morgan itself disclosed in its latest quarterly report.
A $13 billion settlement won’t look so big if it settles between $100 and $200 billion of possible liability, i.e., 10 cents or so on the dollar. That would be a pretty good deal for JP Morgan, which may be why the stock price hasn’t been affected by the announcement of this possible settlement. Clearly stockholders don’t see a $13 billion settlement as material.
And, regardless of the dollar amount, no settlement is sufficient without individuals, including executives, being charged and held accountable personally with fines, bars from the industry and, where appropriate, sent to jail. This settlement looks like the Dimon and JP Morgan are using other people’s money (i.e., the shareholders’ money) to buy get-out-of-jail-free cards for their officers, directors, supervisors and other employees.
True, it has been reported that DOJ has refused to give a no-prosecution agreement to JP Morgan and, therefore, there is still the possibility of criminal liability in the future. But, criminal prosecution is a very, very high bar and very unlikely, certainly as to individuals and even more so as to executives. That makes the failure to hold individuals personally accountable civilly all the more indefensible, which is what appears to be happening here. (We will be detailing shortly the case for charging Dimon himself.)
It’s not really $13 billion because only $9 billion is in cash, much of that may be tax deductible and some may be shifted to the FDIC.
The reported $13 billion settlement is only $9 billion in cash with $4 billion in so-called mortgage relief. There have been a number of “mortgage relief” programs over the last several years, but they have been very poorly run, woefully inadequate and ultimately failures. While the details of this particular program remain unknown, the fact the banks have been so successful at gaming and manipulating them in the past is, at best, troubling.
Moreover, even if the $4 billion program of mortgage relief was provided, it won’t cost JP Morgan anywhere near $4 billion on a net basis. It looks like it’s been included for PR purposes, including to juice up the headline number.
Additionally, while it’s not yet known how much, some of this settlement – and possibly quite a bit of it – will almost certainly be tax deductible. This means that US taxpayers will be subsidizing the settlement. Therefore, even the $9 billion in cash will cost JP Morgan much less than that.
To add insult to injury, it has been reported that JP Morgan is taking the position that the FDIC, and not JP Morgan, is responsible for the liabilities of Washington Mutual. JPMorgan is reported to be trying to shift any portion of the settlement related to Washington Mutual to the FDIC, thereby again lowering its costs even more and shifting yet more costs to others.
Blog
Share