The complaints about financial reform that have been burning in deregulation devotees and lobbyists largely fall within one generalized rallying cry: “Banks are simply too burdened by excessive regulation to lend to the American people and fuel economic growth!”  They claim this is due to restrictions preventing them from lending to supposedly creditworthy businesses and individuals or oppressive oversight and reporting obligations devouring their profits they otherwise would use to lend. In reality, these claims are all wrong.  Thanks to financial reform, not in spite of it, banks and the economy are thriving, while our financial system is much more stable and resistant to another financial crisis.

The evidence overwhelmingly shows that banks are more profitable than ever, lending is increasing, and more and more consumers are taking advantage of that increase as evidenced by the increase in household debt.  Here’s a snapshot that tells the real story: 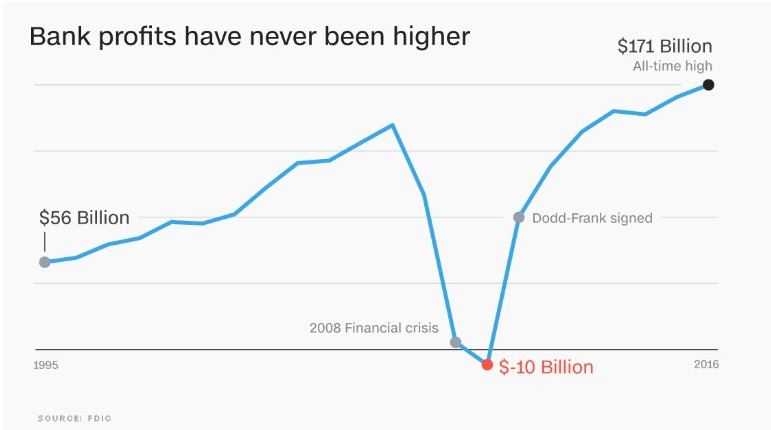 Given that, one has to reasonably ask why any changes should be made to the current financial regulatory regime at all.  For example, one suggestion would severely curtail or outright eliminate enhanced prudential standards for twenty-five of the largest thirty-eight banks by increasing their threshold for oversight from $50 billion to $250 billion. Out of almost six-thousand commercial banks in the country, that proposal relates to only .5% of the largest and most profitable banks in America.  This idea, which is absurdly being advanced in the name of relief for community banks, would have serious systemic risk implications given the important protections and monitoring tools it would take away from regulators.

Enhanced prudential standards ensure that banks undergo regular stress tests in case of crisis, hold sufficient capital and liquidity against unexpected downturns, construct contingency plans should they fail, among other things.  These are reasonable, minimal requirements for 25 of the largest banks considering they make up almost one-sixth of total U.S. banking assets and the concurrent failure of a few would equal or surpass the largest bank failure of the 2008 crisis.  Importantly, the $50 billion threshold is not a blinding, all-or-nothing trigger or blunt instrument for enhanced regulation.  As we have noted before,[1] the Fed has the discretion to appropriately tailor its standards for each bank, on a sliding scale of risk, and that the Fed has made consistent, judicious use of this authority: prudential standards are risk based and tailor to the specific activities of the particular bank.

Another constant target of the unyielding deregulatory drumbeat is the Volcker Rule, which prevents banks from recklessly trading stocks, futures, and derivatives for their own accounts, a major incendiary component that fueled the 2008 crisis.  The regulation is already tailored significantly by size so that smaller banks have fewer requirements and by a wide range of carve-outs for market making, underwriting, hedging and other activities that benefit customers.

Despite these reasonable accommodations, the largest banks continue to seek to undermine the regulation.  A recently discussed proposal would exempt banking entities under $10 billion, with a few restrictions, from all aspects of the Volcker Rule, essentially freeing them to engage in high-risk trading for their own accounts.  However, the discussed $10 billion limit on this exemption hides an ownership loophole that would allow a large financial institution to create, own, and operate an unlimited number of $10 billion subsidiaries.  If there is one certainty in life, it is that Wall Street will ruthlessly exploit any available loopholes in search of increasing their profits and bonuses.  It would therefore be unreasonable to think that none of the enterprising and self-interested banks would attempt to make use of this loophole, completely circumventing the intentions of the rule and the exemption.

A third proposal that would meaningfully increase systemic risk focuses on the Supplementary Leverage Ratio (SLR) for custody banks, which is meant to ensure these systemically critical banks have a sufficient cushion whenever the next downturn hits.  Custodial banks serve as the nexus for the largest banks, institutional investors, and insurance companies by holding massive amounts of their deposits and facilitating execution, clearing, and settlement between them.  In any crisis scenario, these banks serve as irreplaceable gatekeepers that ensure the continued functioning of the markets while chaos reigns around them.  The failure of any one of the largest custodial banks during a crisis would act as jet fuel to any existing conflagration and significantly disrupt the functioning of financial markets.  Providing an exemption from consideration for funds held at central banks from SLR would lessen the ability of custody banks to withstand pressure from extreme losses and failures in the broader financial markets.

The fundamental facts about the current state of the market make any significant changes to existing financial protection rules unnecessary at best and systemically destabilizing at worst.  At a time when records are being set for the stock market, bank profits, and all types of lending, we should be celebrating the reforms that achieved those results, not trying to weaken them.