As the presidential primaries heat up, many candidates are talking about the threats that Wall Street still poses to hardworking families and the need for stronger financial reform. Much of this discussion has focused on a law repealed in 1999 called the Glass-Steagall Act and the introduction of a bipartisan bill by Senator Elizabeth Warren and others in the Senate to reinstate it. Vermont Senator Bernie Sanders has talked about the need to reestablish the law, former Maryland Governor Martin O’Malley has made it a key part of his campaign, and former Secretary of State Hillary Clinton has been asked about her views on it, although hasn’t taken a clear position yet while broadly denigrating the idea with unrelated claims. Republican candidates have so far been silent on the issue, although the bill is co-sponsored by Sen. John McCain (R-AZ).

While there’s much discussion about this law, too much of it lacks facts, context and nuance, which is why Better Markets released a fact sheet on it. After the Great Crash of 1929 and the Great Depression of the 1930s, Congress and President Franklin D. Roosevelt enacted a series of laws that created layers of protections of different types (structural, regulatory and supervisory) between Wall Street’s high-risk gambling and Main Street’s hardworking families. The Glass-Steagall Act was the key structural legal protection enacted. It prohibited the same bank from engaging in both relatively low-risk traditional lending and banking (like savings accounts, mortgages and business loans, backed by FDIC insurance and access to the Federal Reserve Bank) and higher-risk investment banking (running mostly unregulated trading and securities operations).

For more than 60 years, the Glass-Steagall Act kept those activities separate and, during that time, the U.S. had the highest rate of economic growth in its history while the financial system avoided catastrophic crashes. But this law was effectively repealed with the passage of the Gramm-Leach-Bliley Act in 1999, which was part of a larger successful push by Wall Street and its bipartisan allies to dismantle many of the safeguards put in place to protect the American people after the Great Depression in the 1930s.

Once Glass-Steagall was repealed, large financial institutions were able to acquire other financial institutions and combine lower-risk traditional banking and higher-risk Wall Street trading and securities activities. These mergers are what threatened taxpayers and risked massive bailouts because, if the uninsured investment banking activities of a megabank got into trouble and threatened to take down the FDIC-insured part of the bank, then the government would inevitably have to save both parts to save the insured part.

Repealing Glass-Steagall unleashed an acquisition spree that made the biggest banks much bigger, more complex, more interconnected and much greater risks to the country: 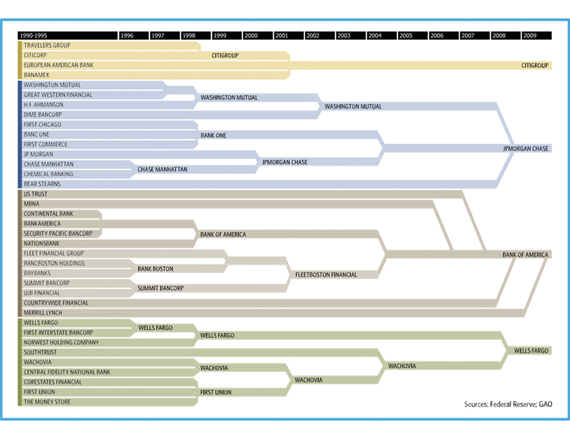 To see a larger version of this chart, click here. 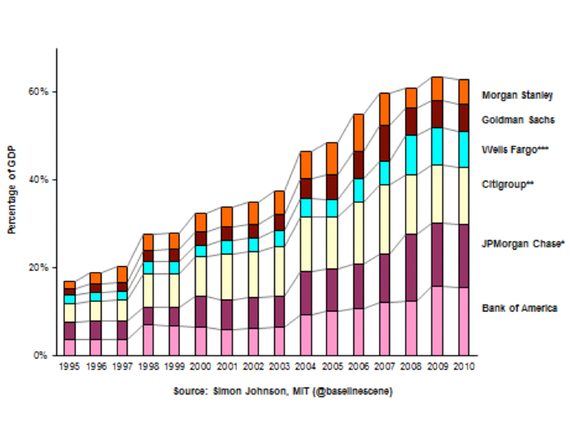 These banks had become so large, complex and interconnected that if they failed, they would endanger the entire banking and financial system, and ultimately, the entire economy. That’s why the government and taxpayers had to bail them out during the 2008 financial crisis and it’s why it is so important to enact meaningful, durable financial reform, which is what the debate about Glass-Steagall is really all about.

Wall Street’s too-big-to-fail banks hate the idea of restoring Glass-Steagall because they want to remain too-big-to-fail, which would allow them to get big bonuses in good times and get taxpayers to bail them out in bad times. But voters in both parties support Wall Street reform because they know that we cannot afford a repeat of the 2008 financial crash, which caused an economic downturn from coast to coast and diverted trillions of dollars from many important issues like education, health care, infrastructure, research and development, and so much more.

Reinstating Glass-Steagall is not the only solution and it won’t solve too-big-to-fail by itself. It can, however, be an important part of an overall plan to reduce the risk on Wall Street while increasing the protections for Main Street. That’s why, as the campaign continues, voters deserve to know whether each candidate supports reinstating a Glass-Steagall-like law or other concrete proposals that will protect America’s hardworking families and take them off the hook for future bailouts. Hopefully, the fact sheet will focus this discussion on the facts and not spin and posturing.