Fact Sheet: The CLO Debate Is Just the Latest Wall Street Attack on the Volcker Rule

Fact Sheet: The CLO Debate Is Just the Latest Wall Street Attack on the Volcker Rule
The first major hurdle to the recently finalized Volcker Rule was when a few community banks discovered that certain securities they own – TruPS CDOs – would be subject to the rule. Community banks brought this problem to the attention of the financial regulators, who acted quickly to understand the issues. But, the big Wall Street banks and their allies saw this as an opportunity to criticize the Volcker Rule and regulators more broadly. They exaggerated the small problem that affected only a handful of community banks and argued for what would have been a large loophole. The financial regulators sensibly rejected the baseless criticism and provided a narrow exemption for the particular securities.
Wall Street’s failed attempt to exaggerate and exploit the small, narrow TruPS problem won’t end their nonstop attacks on financial reform and the Volcker Rule. For example, they are trying to do the same thing with their latest campaign to get unwarranted relief for some of their own securities known as “collateralized debt obligations” or CLOs.
This is Wall Street’s typical attack plan: use any available issue, regardless of merit, in their unrelenting campaign to create after-the-fact loopholes in financial reform, including in particular into the Volcker Rule. Not surprisingly, the industry is trying to say the CLO problem is just like the recently solved TruPS issue. But CLOs are not TruPS, and JP Morgan Chase – the largest holder of CLOs – is not a community bank. Regulators and legislators must reject Wall Street’s baseless arguments and recognize that the CLO issue is largely a Too-Big-to-Fail bank issue.
The biggest Wall Street banks were large holders of these products before, during, and after the financial crisis and today three of them account for 71% of all bank holdings of CLOs: 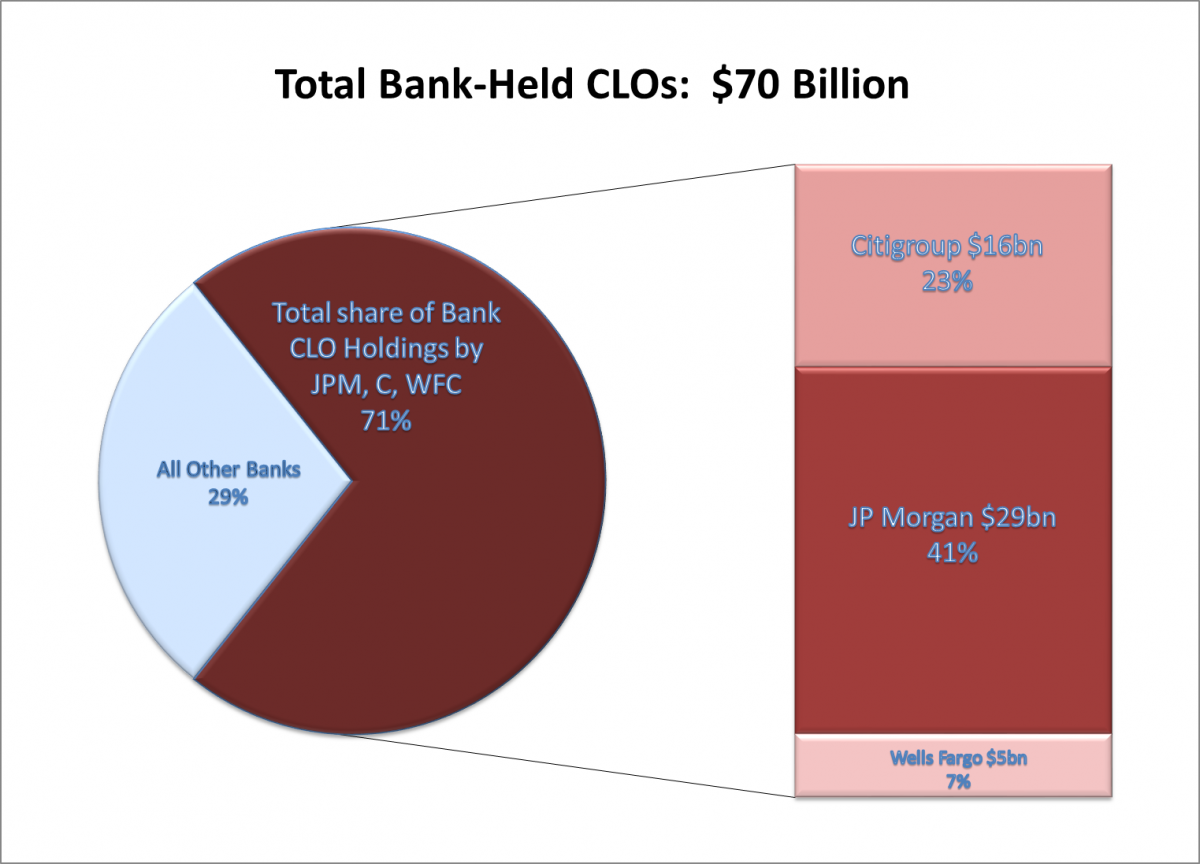 Background on Collateralized Loan Obligations
What are CLOs?
The issues surrounding CLO treatment are NOT the same as those involved in the TruPS situation.
What does the Volcker Rule say about CLOs?
The Volcker Rule prohibits ownership of hedge funds, and CLOs are effectively hedge funds. But there are numerous ways that an existing CLO may become outside the scope of the Volcker Rule, so the rule’s impact on the vast majority of CLOs is likely zero.

​CLOs that are backed by a mix of loans and non-loans are generally covered by the Volcker Rule because they are identical to hedge funds – therefore banks have strict limits on how many they can own.

Certain CLOs may contractually provide investors with rights or protections that cause their investments to be considered “ownership interest” under the Volcker Rule. It is impossible to know how many CLOs have such features, since the documents are non-standard and not publicly available. CLOs without such features are not subject to the Volcker Rule.