Everything You Need To Know About the $50 Billion Threshold

Section 165 of the Dodd-Frank Act requires the Federal Reserve (Fed) to establish regulatory standards based on individualized risk analysis for bank holding companies with assets greater than $50 billion that are more stringent than those that apply to bank holding companies with fewer assets, which do not pose similar risks to the financial stability of the United States.

Recent discussions to change the $50 billion threshold have focused on either raising the dollar threshold or eliminating it entirely. One suggestion is to replace the easy-to-understand, easy-to-administer $50 billion threshold with a new, complicated, multi-factor and largely political process. This would effectively eliminate the Fed’s discretion in applying existing law, rendering some systemic risk oversight and enforcement functions ineffective.

Although there is heated rhetoric surrounding proposals to eliminate or significantly change the $50 billion threshold, the plain facts – and the language of the law itself – show that the Fed has the discretion to appropriately tailor its standards for each bank, on a sliding scale of risk, and that the Fed has made good use of this authority. 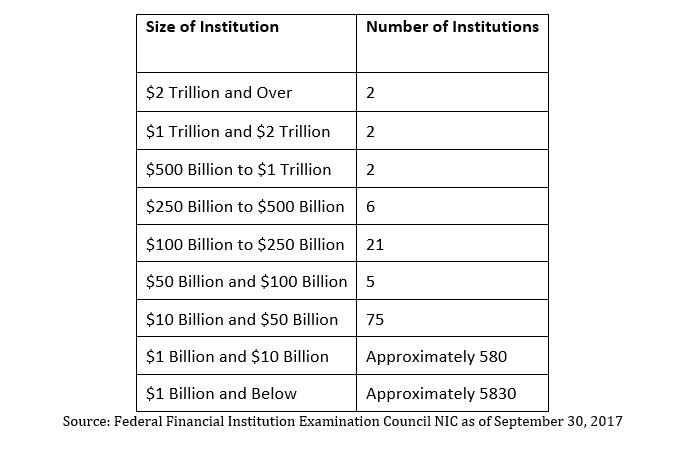 The first fact to remember is that the $50 billion threshold is merely the beginning of the analysis of what the Fed might — or might not — require upon a closer look at an institution above the threshold. Those requirements are based on size, complexity, activities and other factors that lead to varying risk profiles for banks above $50 billion. As such, the Fed does not treat all banks above the threshold the same way. Indeed, the statute provides the Fed with a significant amount of discretion to tailor the enhanced standards that it applies. Therefore, to evaluate proposals to change the threshold it is necessary to understand what happens today when a U.S. bank holding company has $50 billion or more in assets. The answer lies in the text of the Dodd-Frank Act and in the regulation implementing the law.

The starting point for an analysis of the $50 billion threshold is Section 165 of the Dodd-Frank Act. In particular, Section 165(a) of the Dodd-Frank Act requires the Fed to establish “enhanced supervision and prudential standards” for bank holding companies with more than $50 billion assets that are both (1) stronger than the standards applicable to smaller institutions and (2) increase in strength based on an evaluation of each bank holding company’s unique riskiness.

The statute requires the Fed to apply certain standards and also provides the Fed with full discretion in applying other enhanced standards. Most importantly, the law grants the Fed broad discretion to tailor any standards that it applies under Section 165(a):

The law also gives the Fed discretion to establish, on its own, a threshold higher than $50 billion for the application of certain enhanced standards:

As is clear, the statute gives an immense amount of flexibility and discretion to the Fed. Indeed, even as to the standards that the Fed must apply, the law gives the Fed discretion as to how and how much to apply each standard.

The next point of analysis is the implementation of the law by the Fed. Through a series of rulemakings, the Fed has further explained how it will apply such enhanced standards. In general, the standards increase as the bank holding company’s total consolidated assets and risk profile increase. These standards do not apply to nonbank financial companies designated by FSOC (which are subject to other standards).

The sections below describe how the Fed has implemented these standards.[2] 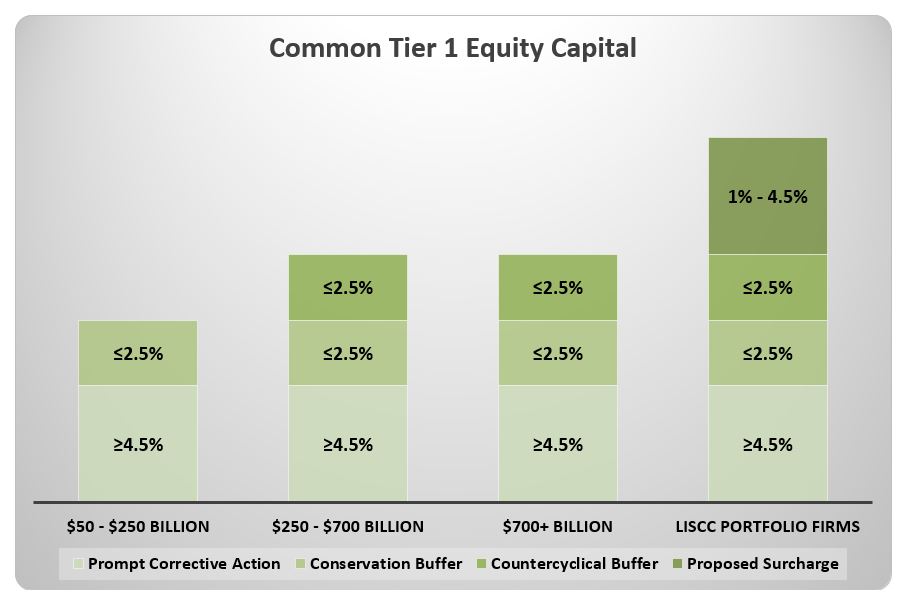 Overall Risk Management Requirements including the Formation of a Risk Committee: Under the statute, institutions with more than $10 billion in assets are required to establish a risk committee. For banks with total consolidated assets greater than $50 billion, regulations require the committee to be independent and report directly to the board of directors.

Concentration Limits: The statute limits the ability of any company subject to enhanced prudential standards from having credit exposure to any unaffiliated company that exceeds 25 percent of the bank’s capital. Each bank, through its risk management process, is required to adhere to this limitation, although the Fed has the discretion to exempt an institution entirely if it deems it appropriate.

Contingent Capital Requirements: The rule requires banks to have a contingency funding plan, which must have at least a quantitative assessment and an event-management process. The Fed does not itself say what should be in the plan.

Enhanced Public Disclosures: Enhanced disclosure in a number of areas is required, and such disclosure is not tailored by bank size.

Limitations on Short-term Debt: Regulations for this section are not yet written.

The chart below details which key elements of the Fed’s enhanced prudential regulations apply to banks of different asset size: 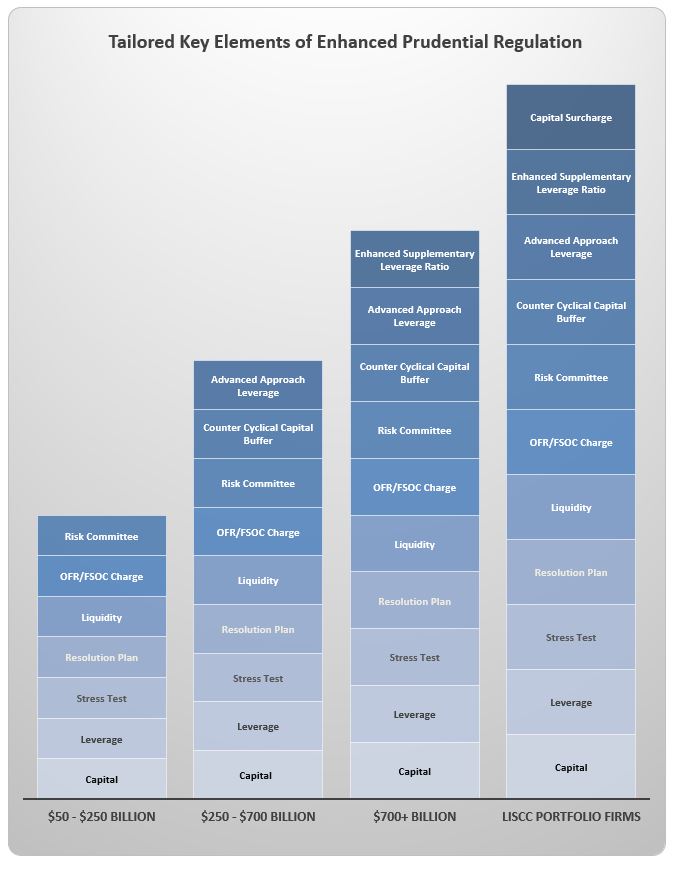 A number of other sections of the Dodd-Frank Act – unrelated to prudential standards that may or may not apply under Section 165 discussed above — impose certain requirements on bank holding companies in excess of $50 billion. However, in only two circumstances do regulators lack flexibility to tailor those requirements:

Other provisions of the Act provide the regulators with the ability to tailor requirements imposed on institutions with assets in excess of $50 billion:

In summary, the Fed, in conjunction with the other banking regulators, has used its discretion under the Dodd-Frank Act to tailor enhanced prudential standards so that a $50 billion bank is not treated the same as a $250 billion bank or a $2 trillion bank.

[3] For example, on September 26, 2016 Fed Governor Tarullo announced the “elimination of the qualitative portion of CCAR for nearly all the firms with less than $250 billion in assets, along with some record keeping and reporting requirements.”