Everything You Need To Know About The Fed’s Cover Up 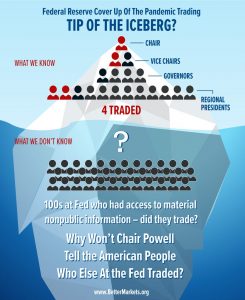 As hundreds of thousands of Americans were dying and tens of millions were being thrown out of work due to a catastrophic pandemic that gripped the country with fear, some of the most senior officials at the U.S. central bank – the Federal Reserve System – were making dozens of multimillion-dollar trades, seeking to personally profit in 2020 during the disaster.  This is nothing more than pandemic profiteering and those people should have been condemned and fired for failures of leadership and judgment as well as violations of clear Fed policies and possible violations of law.

Shockingly, that did not happen. On July 14, 2022, the Federal Reserve’s Inspector General released a report about his “investigation” into the matter. It was no surprise that the scope was very narrow and that it omitted key information and therefore is not credible.

That’s why, since the Wall Street Journal first reported this outrageous conduct, Better Markets has been leading the charge in calling for transparency, leadership and accountability (detailed here).  Yet, days, weeks and now more than a month has passed and the Fed continues to stonewall requests to provide the American people with the most basic information about these egregious violations of the public trust.

It is now clear that the Fed is trying to cover up this pandemic profiteering.  For example, the Fed has failed to disclose:

(1) how many officials and staff at the Fed traded for personal profit during the pandemic while in possession of material nonpublic information;

(2) the details of Vice Chair Clarida’s extremely well-timed trades beyond simply the claim of a “pre-planned re-balancing” especially in light of the latest explosive reporting that he amended his trading filing, which appears to undermine his prior claims and raises serious questions about whether or not he engaged in illegal insider trading;

(3) the dates Dallas Fed President Kaplan made his multiple multi-million dollar trades, which were supposed to be on his disclosure forms, and all the details related to those trades;

(4) the details regarding Chair Powell’s personal sale of between $1,000,000-$5,000,000 from the Vanguard Total Stock Market Index on a very busy October 1, 2020.  According to his annual disclosure forms, Chair Powell has never made such a large trade, which is sizable relative to his reported net worth.

Chair Powell has stated that the trust of the American people is essential for the Fed to effectively carry out its mission.  However, his conduct over the last 34 days has only eroded that trust more as he excused, denied or outright ignored this outrageous conduct, which included Fed leaders personally trading to enrich themselves while:

(1) in the middle of a crippling historic pandemic,

(2) in possession of material nonpublic information,

(3) the Fed had all hands on deck working overtime to prevent the collapse of the economy,

(6) tens of millions of Americans were being thrown out of work, facing economic devastation, and not knowing how they were going to feed their families or pay their rent.

This unconscionable pandemic profiteering should have prompted Chair Powell to be a leader who restated, reinforced and demanded the highest ethical standards.  After all, he publicly admitted that “the trust of the American people is essential for the Federal Reserve to effectively carry out [its] important mission.”  Its ability to do its job and carry out its mission has, however, been compromised and significantly weakened.  For example, when the Fed is examining, supervising and regulating the biggest banks on Wall Street, what’s it supposed to say “Do as I say, not as I do”?  It has lost its credibility and moral authority.

Chair Powell has failed this leadership test.  He has adopted an indefensible “see no evil; hear no evil; speak no evil” response to these violations of the public trust. Rather than being a leader, he has chosen to make meaningless statements like no one “is happy to have these questions raised,” as if the “happiness” of the Fed Chair and his colleagues is some appropriate standard.  Those remarks (and the trading itself) only confirm how completely out of touch with reality the Fed and its leaders really are.

Much worse, Chair Powell has repeatedly and falsely blamed inadequate Fed policies but he has never identified those policies.  He has gone so far as to incorrectly say that the trading by Fed leaders complied or appeared to comply with those unidentified policies.  However, there are explicit and applicable Fed policies that clearly apply and prohibit the trading that occurred here, as we have detailed in a letter to Fed Chair Powell (which are also quoted below).

While it is good that two regional Fed Presidents have resigned and and that the Fed IG and the SEC are now investigating whether laws were broken (all as we called for), it’s not too late for Chair Powell to provide the American people with the facts and call in the Justice Department to help restore his credibility and the credibility of the Fed so that he and it can earn back the trust of the American people.

Until then, the clock will run.

FOR MORE INFORMATION ABOUT THE FACTS AND EVENTS, GO TO OUR WEBPAGE ON “EVERYTHING YOU NEED TO KNOW ABOUT THE FEDERAL RESERVE TRADING SCANDAL” HERE.

“1. Members of the Board of Governors of the Federal Reserve System and presidents and first vice presidents of the Federal Reserve Banks have a special responsibility for maintaining the integrity, dignity, and reputation of the System. Accordingly, they should scrupulously avoid conduct that might in any way tend to embarrass the System or impair the effectiveness of its operations.”

“2. They should carefully adhere to the spirit, as well as the letter, of the rules of ethical conduct prescribed for employees of the Board of Governors or the Federal Reserve Banks and should exemplify in their own conduct the high standards set forth in those rules.”

“3. Their personal financial dealings should be above reproach, and information obtained by them as officials of the System should never be used for personal gain. In order to avoid even the appearance of acting on confidential information, they should not knowingly purchase or sell any security [during the FOMC black out period]…. Beyond these guidelines, they should carefully avoid engaging in any financial transaction the timing of which could create the appearance of acting on inside information concerning Federal Reserve deliberations and actions.”

“4. They should be careful to avoid any dealings or other conduct that might convey even an appearance of conflict between their personal interests, the interests of the System, and the public interest….”

The links and cites to these Fed policies, which are on the Fed website, can be found here.