Ignoring Facts, The Clearing House, One of Wall Street’s Most Powerful Lobby Groups, Criticized Better Markets for a Claim it did not Make

The Clearing House (TCH), one of Wall Street’s most powerful lobbying organizations in Washington DC, criticized Better Markets for an argument it did not make, while ignoring the facts that supported the statements Better Markets did make.  On February 7, 2018, Politico ran a story entitled “Banks poised for windfall as regulators move to ease rules,” which quoted our President and CEO, Dennis Kelleher, saying:

“There just are not enough creditworthy borrowers available to absorb this flood of cash into the banks.  Part of it is going out the door because they’re lowering standards and increasingly lending to less creditworthy borrowers, which of course is laying the groundwork for another crisis.”

TCH in a blog post twisted that statement into “Better Markets predicts financial crisis based on expanded bank lending to low- and moderate-income borrowers that is not occurring.”  They cited the decrease in home-purchase loan origination to low- and moderate- income households as proof that we were mistaken.

Not only do they miss the point, they offer an apples-to-oranges comparison that doesn’t work and isn’t relevant to what we were saying.  And, TCH like all of Wall Street failed to identify the long lines of credit worthy borrowers who have been unable to get credit, i.e., where is this “flood of cash” going to go?

As TCH well knows, low FICO credit scores (i.e. less creditworthy borrowers) are not limited to low- and moderate-income households, and further, income does not have any bearing on credit scoring.  According to Experian, “Income is not part of a credit report and is not considered by credit scoring systems…Simply because a person has a lot of money doesn’t mean they will use that money to pay their debts.”

We did not say that home purchase mortgage lending to low- and moderate-income borrowers was increasing.  Rather, we were talking about less credit worthy borrowers generally.  We were talking about lower down payments on homes, an increase in mortgages with higher loan to value ratios, lending to borrowers with higher debt, and increasing delinquencies.  In other words, lower creditworthy borrowers importantly include the middle class, which is increasingly finding itself indebted and financially stretched.

For example, the Financial Times recently reported that “the big four retail banks sustained a near 20% jump in losses from credit cards in 2017….” That consumers are increasingly stretched financially is indicated by the fact that “open credit card accounts in the US is expected to reach 488 million,” more than 108 million since post-crash lows in 2010.

Moreover, as detailed by the Federal Reserve Bank of New York, all households reached a new high in total household debt the 3rd Quarter of 2017 rising $116 billion to reach $12.96 trillion, $280 billion above the previous 2008 third quarter high. Balances climbed 0.6 percent on mortgages, 1.9 percent on auto loans, 3.1 percent on credit cards, and 1.0 percent on student loans this past quarter.

The graphs below tell a similar story of increasing debt in America: 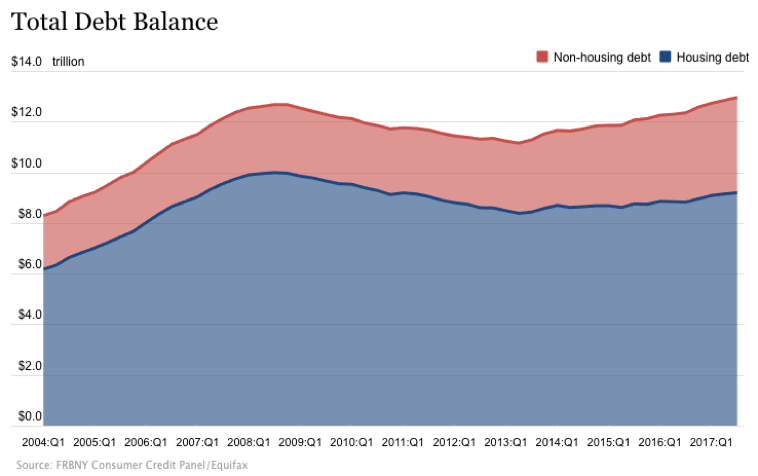 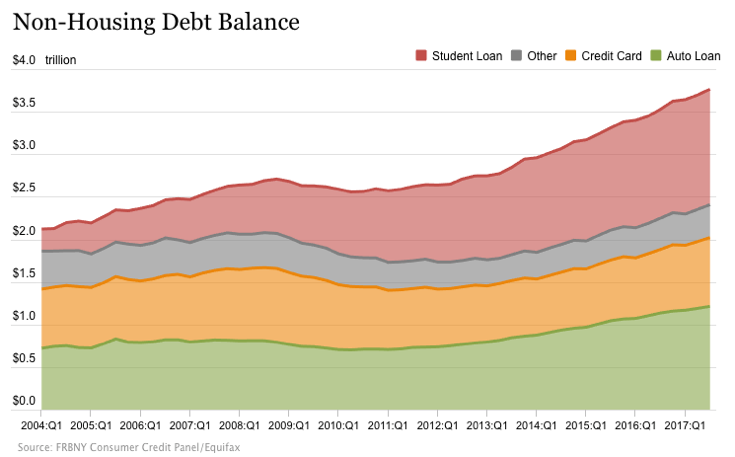 There has also been ample reporting on mortgage lending standards being relaxed.  For example, The Washington Post reported in June 2017, “Fannie Mae will ease financial standards for mortgage applicants next month.” And a story in the August 4, 2017 Los Angeles Times proclaimed “As prices rise, mortgage lenders are making it easier to buy a house.”

Long story short, the US simply does not have a credit supply problem.  It has a lack of credit worthy borrowers problem that has largely been created by the catastrophic crushing economic consequences of the 2008 crash, which was the worst financial crash since 1929 and is going to cost the US more than $20 trillion in lost GDP.  Rolling back the financial protection rules put in place over the last few years only increases the risk of that happening again.  Plus, doing so this late in the business cycle is irresponsible because borrowers are already debt-stretched and an economic downturn is inevitable, meaning that delinquencies are going to increase and creditworthiness is going to decrease.  Those are the facts TCH choose to ignore while distorting what we had to say.