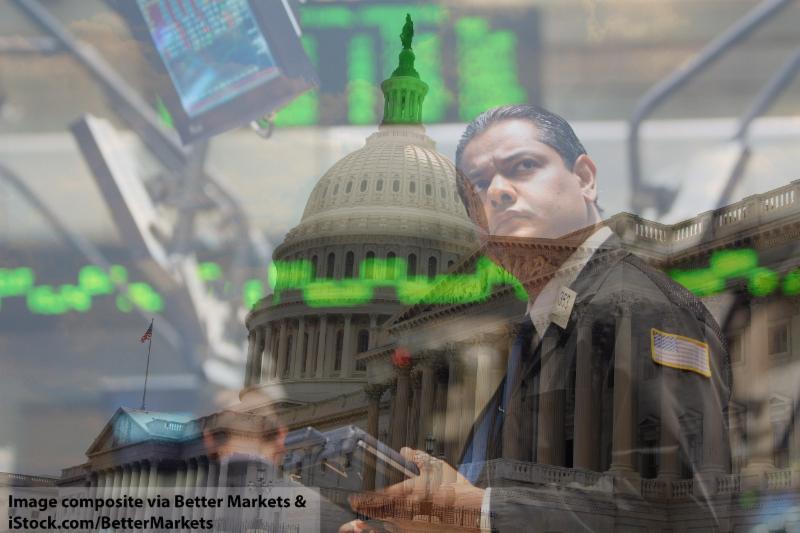 The $1 trillion so-called “Flash Crash” remains shrouded in mystery and our markets remain precarious and vulnerable on the five year anniversary of this historic crash: Yesterday was the fifth anniversary of the innocuously titled Flash Crash, where the stock market lost close to $1 trillion before bouncing back up about $1 trillion in the span of just 36 dizzying minutes. This unexpected and mysterious crash exposed deep, unseen and dangerous fault lines in our markets and regulatory structures. Adding to the trauma inflicted by the 2008 financial crash, the Flash Crash also further weakened public and investor confidence in our markets, on which all American families, businesses and our economy and standard of living depend every day.

For the best short, clear, authoritative, to-the-point state of play regarding Flash Crash and what’s happened or not in the five years since, make sure you read Joe Saluzzi and Sal Arnuk at Themis Trading here. They write in the piece how, “[o]ver the past few days, we’ve been asked often if the Flash Crash could happen again.  The short answer is yes. While regulators have addressed a few issues to reduce the risk of another Flash Crash, another crash could still occur because of underlying structural issues as well as the lack of advanced regulatory surveillance.”

There is simply no denying that the American people remain at risk for another computer-driven disaster on an even larger scale because, unfortunately, little has changed since the Flash Crash: while the Securities and Exchange Commission has just released a proposal to require high frequency traders (HFT) to register with FINRA (an SRO), much quicker, deeper and broader action is needed to curb predatory HFT. High-speed computers programed to use age-old tactics like spoofing and layering still inexplicitly often paralyze regulators into inaction. The self-regulatory organization (SRO) system has proven to be an abysmal failure.

Making matters worse: regulators at the CFTC and the SEC – who are supposed to be the cops on the Wall Street beat – are grossly underfunded and, therefore, out-gunned. Despicably, Wall Street and its allies in Congress have used the funding process to handcuff the cops to make sure the cops can’t handcuff the crooks. As a result, as Better Markets has said, regulators and prosecutors are effectively trapped in the 19th Century horse and buggy era trying to catch up to 21st Century markets moving at the speed of microseconds, soon to be nanoseconds.

This has been disturbingly confirmed by the recent arrest of the lone day trader in London, now accused to be “a cause,” if not “the cause” of the Flash Crash. It is as shocking as it is unacceptable that it took prosecutors and regulators five years to catch this relatively unsophisticated trader. Even more troubling, even this arrest after five years apparently wouldn’t have happened without a whistleblower handing the prosecutors and regulators the goods on the guy. As if that wasn’t enough to shake everyone’s confidence, all of this comes after numerous investigations into the supposed causes of the crash – including by Congress, the Securities and Exchange Commission and the Commodities Futures Trading Commission – not one of which apparently included looking at this guy’s actions, even though the SRO CME identified and flagged this trader’s suspicious manipulative behavior the very morning of the Flash Crash. As a result, Americans are still asking the same questions today that they were five years ago and even more urgent ones due to this recent arrest.

It’s critical that we get to the bottom of what really caused the Flash Crash and why no one knew about this trader’s critical involvement for five years, during which he is alleged to have pocketed $40 million. That is the only way to finally rebuild the trust and confidence of the American people and investors in our markets. It is also the only way anyone will know what real reforms are necessary to protect against future crashes.

That’s why, on the fifth anniversary of this historic event, former Senator Ted Kaufman (D-DE) and Better Markets President and CEO Dennis Kelleher called on Congress to create an independent commission to investigate the Flash Crash. Only a Congressionally-created, independent commission with full subpoena power, the ability to hear testimony and recommend reforms will be able to thoroughly investigate what happened here, including why the many prior investigations were so deficient. The American people deserve not only to be protected, but they deserve answers. You can read the request to Congressional leaders asking for Congress to authorize this commission with full and sufficient authority and funding as soon as possible here. And you can read a joint op-ed from Senator Kaufman and Mr. Kelleher on the importance of a commission here. 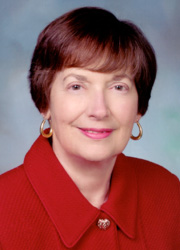 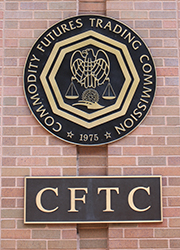 Former CFTC Chair Brooksley Born: a longtime fighter to protect Americans from the dangers of derivatives: By now, almost anyone paying attention knows that former CFTC Chair Brooksley Born fought to regulate derivatives in the late 1990s. She lost that battle and derivatives were unregulated, which allowed Wall Street to create, package, sell and distribute trillions and trillions of dollars of what Warren Buffet has correctly referred to as “weapons of mass financial destruction.” While there are many sensible uses for derivatives, they are also a perfect vehicle for Wall Street’s too-big-to-fail banks to recklessly gamble with, ballooning their billions in bonuses but also dramatically increasing systemic risk for everyone else.

The Wall Street derivatives-making machine is what was at the core of creating the subprime bubble before 2008 and what not only ignited the financial crash, but they also acted as a conveyor belt distributing that risk unseen throughout the global financial system. A key goal of financial reform and preventing Wall Street from ever doing that again to the American people was to regulate derivatives as Chair Born argued over a decade ago. Much has been done to bring transparency and a level playing field to the derivatives markets since 2008, but much still needs to be done.

Chair Born was one of a number of terrific speakers at the INET Finance and Society Conference in Washington, DC this week and her remarks are an important reminder of where we have been, where we are and where we need to go to protect the American people and the country from another derivatives-driven financial crash and crisis. 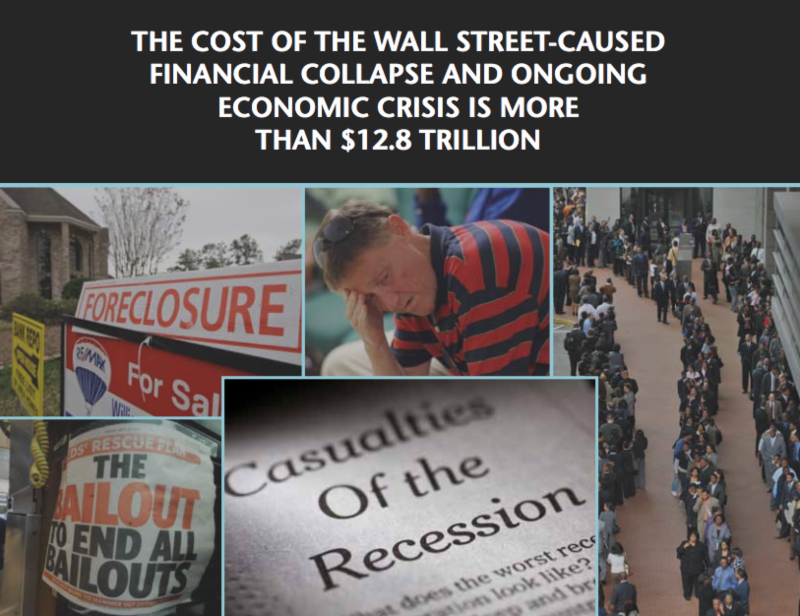 A fragile and dangerous financial system and the threats posed by it to people everywhere should be a top issue for politicians worldwide: As Better Markets has documented, the 2008 financial crash was a massive economic calamity that will cost the United States at least $12.8 trillion. But the crash was a worldwide crisis that had ramifications across the globe, including in Britain, where the government was forced to outright nationalize some of the country’s largest banks (unlike here where some were de facto nationalized, which socialized losses but privatized gains from taxpayer bailouts and government support). The 2008 financial crash proved yet again that, other than war, nothing devastates a country’s economy more than a financial crash and crisis, which spews widespread economic wreckage across the land, ruining lives and treasuries alike.

The worldwide financial system still remains too fragile, so you would think that major political campaigns would make financial reform issues a priority. We’re already seeing these issues start to play a big role in the 2016 Presidential election because it is undeniable that the American people rightfully remain very concerned about the threats posed by Wall Street and the failure of elected officials, policy makers and regulators to sufficiently protect Main Street from those threats. But we’re seeing a different conversation, or lack thereof, on the other side of the Atlantic ahead of the parliamentary election in Britain today.

Unfortunately, candidates there have remained silent on an issue that shook the world just a few years ago, and financial systematic risk has even failed to make the list of priorities among British voters. The electoral campaign in Britain could be the closest in a generation, so it’s especially disappointing to see these issues virtually absent from the debate. With the global financial markets still at risk of another crash, voters on both side of the Atlantic deserve a candid, robust discussion about the key financial reform issues and a public debate about how political leaders must work to prevent another global financial crisis.

Why Elizabeth Warren makes bankers so uneasy, and so quiet:  Bloomberg Markets by Katrina Brooker 5/5/2015

Taking on the banks: A Conversation with Anat Admati: The New Yorker by John Cassidy 5/5/2015