Financial Reform Newsletter: The Fed’s Action Against Wells Fargo Sends a Message to Banks and Boardrooms Across America 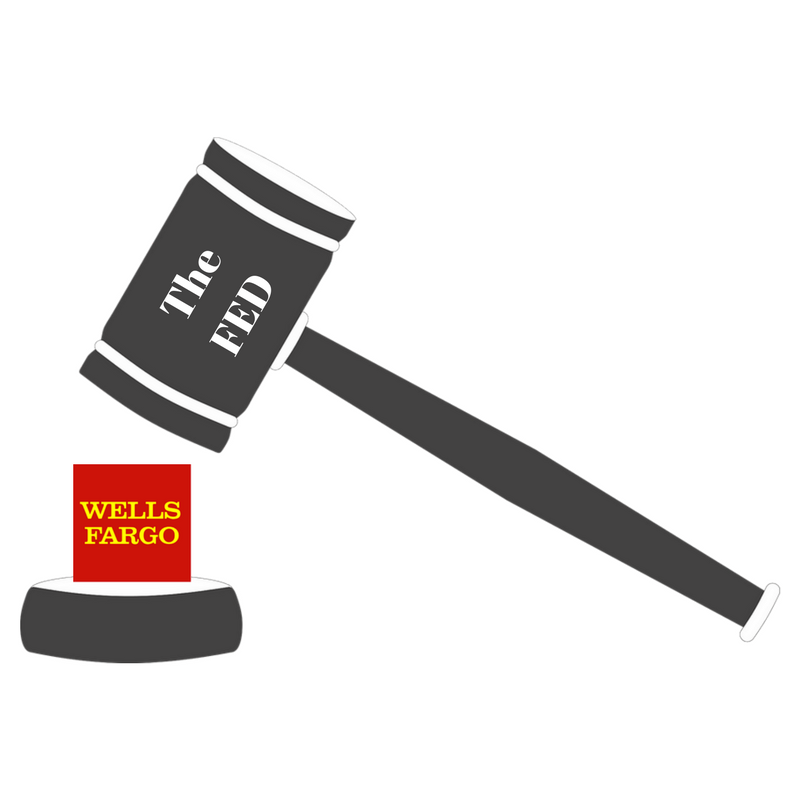 As we said more than a year ago, Wells Fargo needed to take far-reaching, fundamental, concrete, unexpected and painful actions to fix the management, systems and controls failures that gave rise to their decade-long egregious misconduct.  If not, we said, the bank risked being punished for all the unpunished sins of Wall Street for causing the 2008 financial crash, getting bailed out with no accountability and continuing to pocket bonuses.  Our proposed title for the Op Ed was “Wells Fargo’s Unique Opportunity,” but American Banker entitled it “Here’s How Wells Fargo Proves It’s Not a Wall Street Villain.”  No guarantee it would have worked, but we now know the half-measures, PR actions and predictable moves didn’t work either.

Late last Friday, the Fed announced unprecedented sanctions against Wells Fargo for its multi-year, widespread consumer abuses and egregious compliance, risk, legal, management reporting and board oversight failures.  In addition to Wells replacing four more members of its Board of Directors, the Fed limited the bank’s growth until it demonstrates significant, concrete governance, risk management and controls improvements, including, in particular, strengthening the effectiveness of oversight by its Board.

The cease and desist order also detailed numerous specific actions that Wells must take under very tight timelines.  Effectively, Wells, its management and Board have been put on probation and the Fed is going to be a very aggressive probation officer. 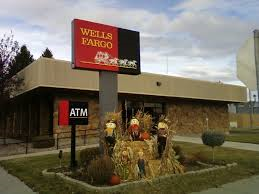 But that’s not all the Fed did to make sure the Board members, in particular, received the message.  It also required each Director to sign the fourteen-page cease and desist order and, further “emphasizing the need for improved director oversight of the firm, the [Fed] sent letters to each current Wells Fargo board member confirming that the firm’s board of directors, during the period of compliance breakdowns, did not meet supervisory expectations.”  Remarkably, the Fed also sent individual letters to the former Chairman and CEO Stumpf and former lead independent director Sanger “stating that their performance in those roles…did not meet the Federal Reserve’s expectations.”

These actions are a stinging rebuke, which may well have been avoidable.  The Fed did not act for almost a year and a half after the first scandal broke in September 2016.  While making its views known, it nonetheless watched and waited for Wells and its Board to take the appropriate comprehensive action and apparently only acted when it was clear that management and the Board still didn’t get the seriousness of the failures and ongoing deficiencies.  This was confirmed by their actions and statements after the shareholders’ votes at the annual meeting last April.  Likely due to the actions they did take, among other reasons, “executives had convinced themselves last year that they were out of the woods,” as The New York Times reported.  However, as we have emphasized, Wells Fargo was going to have to do a lot more than they wanted given the gravity and pervasiveness of their violations and failures.

Finally, those trying to minimize these actions as driven by former Chair Janet Yellen or due to political pressure simply don’t understand the Fed.

First, longtime career professionals at the Fed were in charge of these actions and they likely couldn’t care less about political pressure, real, perceived or trumpeted.  We have little doubt the Fed was hoping and expecting Wells to take the appropriate significant actions and obviate the need for the Fed to act (maybe other than regarding Stumpf and Sanger). 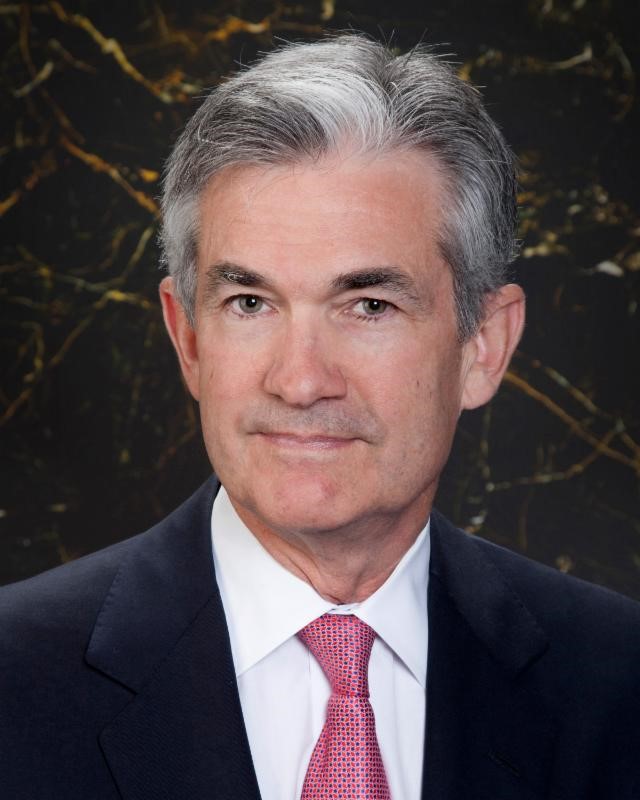 Second, new Fed Chair Jay Powell was the lead Governor for the negotiations with Wells Fargo on these actions and the Fed vote was unanimous.  Anyone thinking Jay Powell as Fed Chair is going to tolerate or turn a blind eye to outrageous, repeated customer abuses and wholesale breakdowns in management, risk and compliance doesn’t know Jay Powell.  Every bank executive officer and director should carefully read a speech entitled “The Role of Boards at Large Financial Firms” that he delivered August 30, 2017, where he said:

“Across a range of responsibilities, we simply expect much more of boards of directors than ever before. There is no reason to expect that to change.”

The message sent by Powell last August and by the Fed in the actions against Wells Fargo could not be clearer and banks’ management and directors better get the message or they too will pay the price.  Frankly, they would be wise to take up Matt Levine’s suggestion in Bloomberg View:

“I hope Wells Fargo will have framed and hang [the Fed’s letter to the Directors] in its Boardroom….  If I ran Goldman Sachs or JPMorgan, I’d frame it and hang it in my boardroom.  It focuses the mind!” (Emphasis in original)

THAT is the point for banks and directors across America.  For Wells Fargo, it has been given a very limited time to take the concrete actions it should have taken more than a year ago. 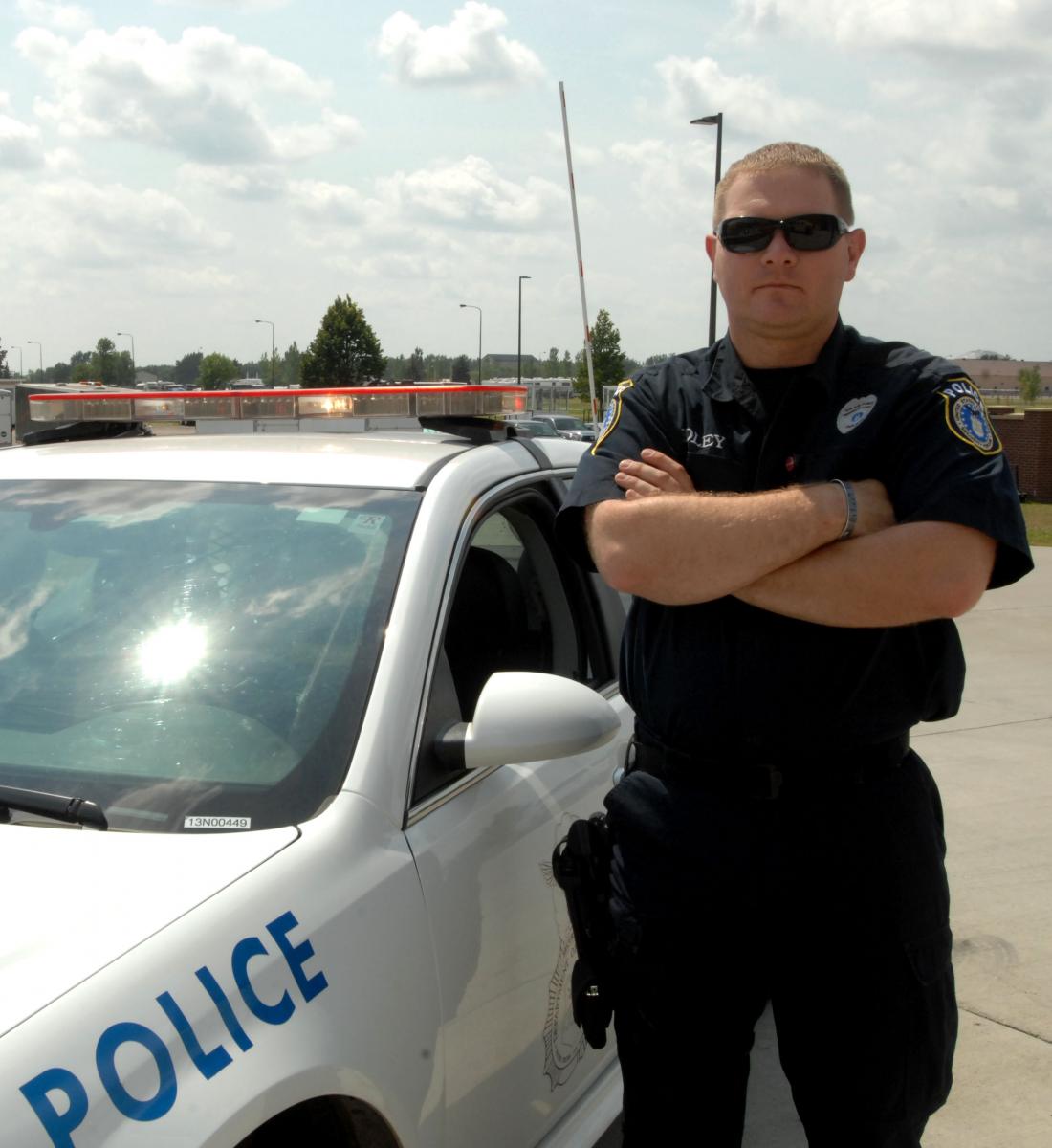 Not even an en banc ruling by the D.C. Circuit Court of Appeals upholding the important independent structure of the Consumer Financial Protection Bureau (CFPB) was enough to stop the seemingly endless flow of reckless and irresponsible decisions being made by acting director Mick Mulvaney.  He continues to inflict more and more damage on the agency and cripple its capacity and willingness to effectively protect consumers.

For example, just last week, the CFPB announced that the Office of Fair Lending and Equal Opportunity, one of the most effective offices within the agency which had collected tens of millions of dollars in settlements against banks engaged in lending discrimination, was being folded into the director’s office where it would instead focus on “advocacy, coordination and education.”  One would think by now everyone in America would support ending lending discrimination due to race, but that apparently is not the case with the current leadership of the CFPB.

This is just one of too many examples of acting director Mulvaney’s anti-consumer actions.  Frankly, it’s difficult to keep up with all the bad things he’s doing so we’ve decided to track and highlight them on a new running blog piece we’re calling “Mulvaney Is Putting the ‘Con’ Into Consumer Protection,” which will be updated periodically.  The first installment can be read here. 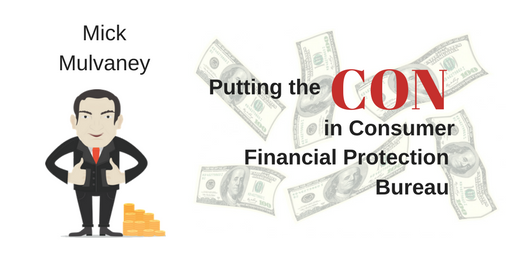 Are Mulvaney’s mindless anti-consumer protection actions really that bad?  In addition to its being wrong to rip off hard-working American families, one only has to remember that the cataclysmic financial crash of 2008 was incubated, spawned and spread by predatory subprime lending, i.e. defrauding and ripping off consumers when they were buying a home.  That failure of consumer protection was the kindling and fuse that ultimately ignited the boom and crash.  That’s why the Consumer Financial Protection Bureau was created and why it is so important.  It’s also what Mulvaney steadfastly ignores.

Rather than paying heed to those obvious lessons, Mulvaney is taking the CFPB cops off the consumer beat, signaling that there’s going to be little if any penalty for breaking the consumer protection laws.  Even in incredibly low crime Canada, that can unleash a crime wave (and certainly will here):

“…criminals respond to increases in the cost of crime by committing fewer crimes.  One of the best known case studies in criminology is about what happened in the fall of 1969 when the Montreal police went on strike for sixteen hours. Montreal was – and still is – a world-class city in a country that is considered one of the most law-abiding and stable in the world. So, what happened? Chaos. There were so many bank robberies that day – in broad daylight – that virtually every bank in the city had to close. Looters descended on downtown Montreal, smashing windows. Most shocking of all, a long-standing dispute between the city’s taxi drivers and a local car service called Murray Hill Limousine Service over the right to pick up passengers from the airport exploded into violence, as if the two sides were warring principalities in medieval Europe. The taxi drivers descended on Murray Hill with gasoline bombs. Murray Hill’s security guards opened fire. The taxi drivers then set a bus on fire and sent it crashing through the locked doors of the Murray Hill garage. This is Canada we’re talking about. As soon as the police returned to work, however, order was restored. The threat of arrest and punishment worked.” (From “David and Goliath,” by Malcolm Gladwell)

Regrettably, Mulvaney’s actions are virtually certain to cause this pattern to happen again in the US.