The 2008 financial crash caused the worst economy since the Great Depression of the 1930s, but the top 1% are doing very well: Last week’s newsletter discussed yet another study showing how middle-class wealth has plummeted since the crash of 2008.  Today’s New York Times shows “Fueled by Recession, US Wealth Gap is Widest in Decades” and the Wall Street Journal shows again the “Wealth Gap Between America’s Rich and Middle Class Families Widest on Record” plus shows how the benefits of the post-crash recovery (’07-’13) has gone to those at the top. 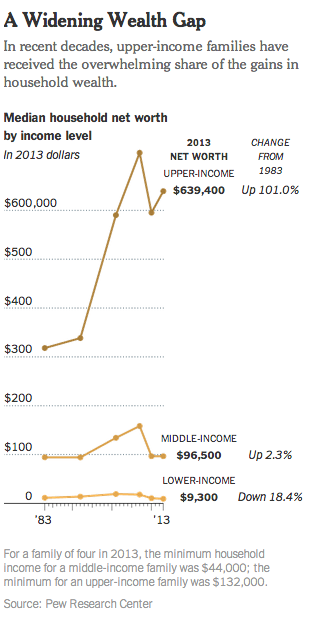 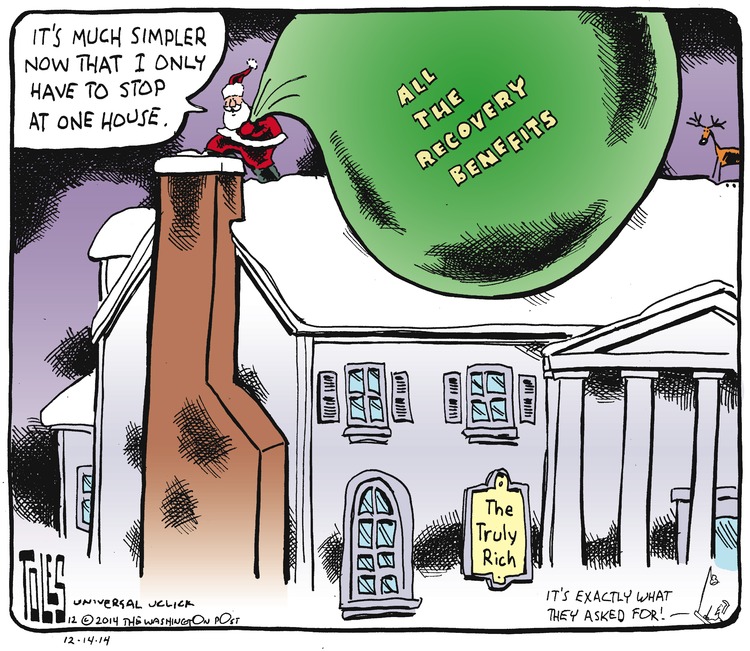 Stopping hidden conflicts of interest from draining retirement savings:  A key provision in the rules that are supposed to protect retirement savings has not been changed for 40 years.  As a result, unbelievably, that outdated rule does not require brokers to act in their clients’ best interest when providing retirement advice.  It also does not require brokers to disclose their compensation, including incentive payments they may get from companies for having their client buy one product or another.  That is, the broker can put his or her economic interest ahead of their client’s best interest and the client will never know………because the rule does not require it to be disclosed.  That’s wrong.  Anyone providing advice to someone saving and investing their hard earned money for retirement should have to act in the client’s best interests (as many now do).  They should not be able to have undisclosed conflicts of interest and they should not be allowed to charge hidden fees or receive hidden compensation for steering their clients to one product or another.  That’s what a new fiduciary duty rule would prohibit and the Department of Labor has been working on updating the rule for several years, in the face of strong opposition.  Hopefully, as a broad coalition of groups has urged, it will propose a rule in 2015, open it up for public comment, and finalize it to protect the tens of millions of Americans saving for retirement.

Congress ends with a battle over the budget and sweetheart deals for Wall Street’s handful of too big to fail banks: It was called the CRomnibus and was supposed to fund the government until next September 30th.  Unfortunately, this was a “must-pass” bill and that means too many saw it as an opportunity to stick in provisions that would not likely survive being discussed and voted on in the light of day.  That’s what the Swaps Push Out special interest provision was:  It would allow a few of Wall Street’s biggest banks to continue gambling in derivatives while being backed by the taxpayers.  Derivatives, as famed investor Warren Buffett observed, are “weapons of mass financial destruction” and were at the core of triggering and spreading the financial crash of 2008.  Remarkably,lobbyists for Citigroup actually drafted the language, even though Citigroup received almost $500 billion in bailouts in 2008, more than any other single company.  As Republican David Stockman said, Citi has no shame, but neither does Jamie Dimon, who personally called members of Congress to lobby for passage of this special interest provision, which presumably will help fatten  his already too big bonus.  As if that weren’t enough, Congress also nearly  passed another deregulatory provision that was attached to the Terrorism Risk Insurance Act (which did not pass).  This provision would have exempted certain market participants from the important protections of clearing and margin if they met a broad “end-user” definition.  Among other negative consequences of this provision, it would have deprived the CFTC of the flexibility to regulate derivatives, end-users and the markets based on actual market activities. The good news is that the CRomnibus fight received a lot of media attention and public debate.  It shined a bright light on the practice of lobbyists attaching financial deregulatory bills to unrelated must-pass legislation.  As Justice Brandeis said, in his famous book “Other People’s Money,” “sunlight is the best disinfectant.”  Let’s hope for lots of sunshine in 2015.

Or as the equally brilliant cartoonist Matt Wuerker captured it: 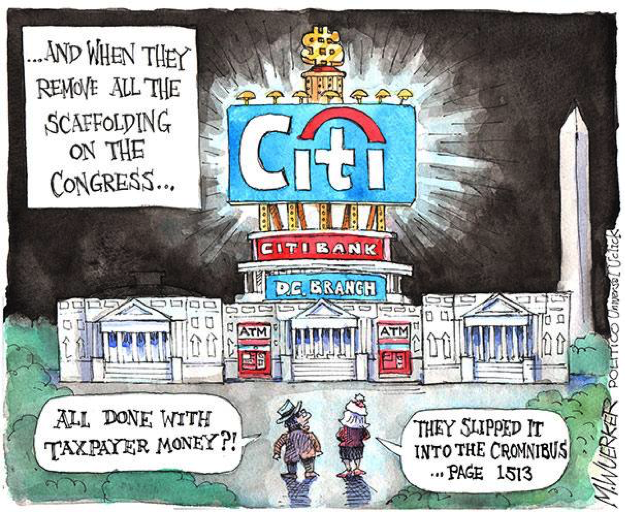 The lawsuit-happy financial industry is at it again, trying to use the discredited club of industry-cost only analysis:  The too big to fail crowd on Wall Street has used their virtually unlimited resources to fight financial reform from the beginning.  That’s not a big surprise because being too big to fail means they get the upside, but, if their recklessness, greed or incompetence causes their firm to fail, then — unlike every other business and firm in the United States – they get bailed out of their failure by the taxpayers.  Great for them, but terrible for everyone else.  That’s why they went to war on financial reform, first in the legislative process, then on the regulators and finally in the courts.  The latest lawsuit is the Loan Syndication and Trading Association court challenge to the risk retention rule.  The rule is meant to ensure that those who package and sell bundles of assets, like the residential mortgage-backed securities which caused the financial crisis, share in the risks associated with their activities, i.e., they can’t just pocket the cash and stick someone else with all the risks.  The industry is suing on a number of grounds, but the industry’s favorite claim, that the agencies failed to adequately consider the costs and benefits of the rule, is unsurprisingly one of them.  The courts have done a very good job of determining that this claim is baseless and, agreeing with Better Markets, have concluded that the agencies do not have to conduct a full (and impossible) cost-benefit analysis, which is really an industry-cost-only-analysis that fails to properly consider the public interest.

Bravo to the Federal Reserve Board for proposing another strong rule to protect the country from having to bail out the biggest banks again:  Last week the Federal Reserve Board held an important open meeting on a proposed rule that would require the biggest of the too big to fail banks (called “GSIBs” for Global Systemically Important Banks) to fund themselves with more equity rather than high risk debt.  Although more still needs to be done, the proposed rule increases the equity requirements when these GSIBs rely too much on high risk short-term wholesale funding, which makes them vulnerable to runs, failure and bailouts – which we all saw in the 2008 crisis.  The day before the Fed proposed its rule, the Bank for International Settlements (BIS in Switzerland) expressed surprise that there had been no decline in the number of too big to fail global trading banks (those that hold a lot of assets in tradable securities and are predominantly funded in wholesale markets).  In addition to the systemic concerns raised by the Federal Reserve Board, the BIS noted that “high cost-to-income ratios [of trading banks] suggest outsize benefits to their managers,” meaning the bankers make lots and lots of money.  We can only hope that the Basel Committee on Banking Supervision will follow the U.S. lead and will finally address the short-term funding risk and incentives in its capital framework and that the Fed will continue its efforts to strengthen the funding base and funding method of the too-big-to-fail GSIBs.

Better Markets In The News:

Banking on Washington: The Philadelphia Inquirer by the Editorial Board 12/16/2014

White House won’t back down on Weiss – Behind the swaps fight – Banks angry at Schumer (again) – Big Fed week ahead: Politico Morning Money by Ben White 12/15/2014

Why rift on derivatives is blocking US budget bill: Associated Press by Marcy Gordon 12/11/2014

Citigroup Will Be Broken Up: The Baseline Scenario by Simon Johnson 12/12/2014