August is typically a sleepy time in Washington, but the past month has been incredibly busy for our team at Better Markets. In just the past few weeks, we have fought for low and moderate income communities in reforming the Community Reinvestment Act, urged the federal banking agencies to stop mindlessly allowing mergers that create more too-big-to-fail megabanks, applauded the conviction of JPMorgan officers for committing financial crimes, and released our second report in our shadow banking series on Money Market Funds. These activities show the enormous expertise of our team and breadth of our work. See more about these activites below.

In addition to these action items, we are also thinking more broadly about creating a financial system that works for all Americans. We used the first annivesary of Robinhood’s IPO to have a conversation about how the financial industry has failed Main Street Americans when they use financial products and how we can truly democratize Wall Street. The Better Markets team authored a law review article in the Western New England Law Review where we argued that Wall Street and finance more generally can and should be democratized. However, Robinhood’s model, based on maximizing frequent high-risk trading, prompted by predatory gamified apps to generate as much short-term profits for Robinhood as possible, is not how. These are exploitive, manipulative practices that enrich Wall Street at the expense of Main Street customers and, often, those least able to afford the losses. 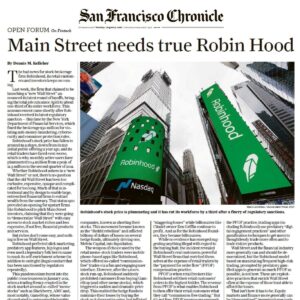 In a recent San Francisco Chronicle op-ed, I went on to write that we need a “Real Robin Hood” on Wall Street that actually provides Main Street investors genuine opportunities to affordably trade, invest and build wealth.

It is essential to call out Wall Street’s wrongdoing and push regulators to enact rules to protect Main Street. Yet, it is also important to provide a positive vision for how we can create an economic system that works for all Americans, that creates broad-based wealth and opportunity, and that is supported by a financial system focused on the real productive economy not wealth extraction and predatory behavior.

We appreciate your support and look forward to continuing our conversation about how to create that economic system in the coming months. Best,
Dennis

From TV, radio, and print — Better Markets’ views on all matters related to finance the economy have been sought after and featured in major news outlets. Here are our top hits from August.

Asset managers bet big on crypto despite market rout
“Just because top-tier companies want to make money from something new, that doesn’t make it a good thing to do. That volatility would normally be a red flag warning.”

JPMorgan Gold Traders Found Guilty After Long Spoofing Trial
“[The verdict] should signal to Wall Street’s biggest financial firms and executives that they are not above the law.”

‘The riskiest loans are outside the banking system.’ Regulators worry that hedge funds could spark the next financial crisis.
“Private funds have become increasingly important in the Treasury markets. In March of 2020 we saw Treasury markets seize up and a lot of the liquidity run dry.”

A young crypto billionaire’s political agenda goes well beyond pandemic preparedness
“[FTX’s proposal] removes a historic layer of protection that has worked extremely well. The markets are going to be transformed in a way that the interests of actual producers and purchasers are going to end up subordinated to speculators and financial products.”

Senate Plan Would Put Bitcoin, Ether Under Commodity Regulator’s Watch
“People who are taking action that could undermine our securities law are playing with fire. You may love or hate the SEC, but transparent disclosure, clear rules…and enforcement is what builds trust and confidence in our markets.”

*You can find all of Better Markets’ media hits from August here. 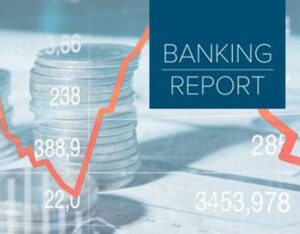 Shadow Bank Series: Money Market Funds
MMFs are marketed and sold as an altnerative to traditional banking accounts, but they don’t have the same regulations as banks to ensure they can withstand market stresses, creating risks to our financial system and taxpayers. Learn more about MMFs and our proposed reforms in the second report in our shadow banks series.

Community Reinvestment Act (CRA) Has Failed and Must Be Strengthened

Credit, investment, and banking services have been unfairly denied to many Americans for too long. The CRA was supposed to change that, but it failed to make an impact in key areas like home ownership and wealth. Our comment letter calls for the CRA to be strengthened to address those issues.

Federal Agencies Must Address the Rampant Fraud and Extreme Volatility of Digital Assets
Our comment letter to the Department of Treasury called for the digital asset industry to be regulated to address the enormous volatility and rampant consumer fraud all too common in the industry.
SEC Rules Will Help Provide Reliable and Comparable Information for the Growing Number of Investors Interested in ESG Funds
Here’s an idea… funds that claim to be committed to ESG investments should actually have significant ESG investments. Seems pretty simple, but Wall Street has vigorously fought the SEC’s proposal to ensure investors are not misled by fund investment and names. Read our comment letters to learn more.

The Federal Reserve and OCC Should Stop Rubber Stamping Too-Big-To-Fail Bank Mergers Without Real Resolution Plans
Better Markets filed a comment letter in response to the Securities and Exchange Commission’s request for comment about “information providers,” whose activities may warrant regulation as investment advisers. The SEC should develop reforms that will increase transparency, protect investors from the conflicts of interest and other threats inherent in the information provider business model; promote fair competition among all those who act as investment advisers by regulating them similarly; and protect the overall integrity of the securities markets.

There have been some interesting new developments in the financial regulatory world, including new legislation proposed that would change how Washington oversees the rapidly-growing field of crypto currency.

U.S. Senators Stabenow (D-MI), and Boozman (R-AR), who serve as the Chairwoman and Ranking Member of the Senate Agriculture Committee, respectively, introduced the Digital Commodities Consumer Protection Act of 2022, which would put the Commodity Futures Trading Commission in charge of regulating most digital commodities. The Senate Agriculture Committee overseas the operations of the CFTC, so this legislation would put the Committee squarely in the driver’s seat for Congressional efforts to regulate crypto currencies.

Better Markets has long been concerned that putting the over-worked and under-resourced CFTC in charge of a fast-growing field like crypto is just asking for trouble.  Dennis Kelleher has previously described the CFTC as “the smallest financial regulator with the smallest budget.” If people are serious about the CFTC properly regulating crypto, they should start by doubling the CFTC’s current budget so that it has adequate funding to do its job now.  Then add the amount of funding necessary on top of that so that it would be able to do the significantly increased work related to crypto.