Bank-Run Risk in the Shadows

“Bank runs aren’t a relic of the 20th century. In fact, they risk becoming a hallmark of the 21st—though with a twist.”

“The 2008 financial crisis displayed characteristics of a classic bank run, but people holding bank accounts weren’t the ones scrambling to get their cash. It was lenders demanding their money from other financial institutions.”

“Indeed, today’s panics are more likely to involve major financial institutions and are largely hidden from plain sight until they are severe enough to trigger plunging stock prices, bankruptcies, layoffs and rising unemployment. And the current European crisis is a reminder that some of the vulnerabilities exposed in 2008 still exist.” 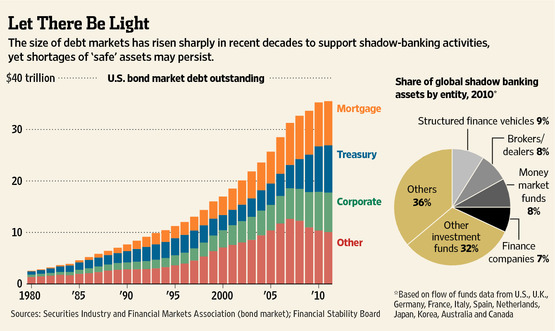