Who Should Be The Next Fed Chair? Everything You Need To Know

As President Biden considers who should lead the Federal Reserve Board when Chair Jay Powell’s term ends in February, it is imperative that his administration conduct a robust, thorough, and comprehensive assessment of any candidate, including especially Chair Powell.

Better Markets report “Should Federal Reserve Chairman Jay Powell Be Reappointed?” provides such an assessment and makes clear for the American people—from Main Street to Wall Street—what is at stake, what should be considered in the process, and the record of Chair Powell.

A searching, thoughtful process is critical because at least four of the seven seats on the Federal Reserve Board will open up before the end of February.  Those personnel decisions will affect not just Fed policies for years to come, but also every American who needs or wants credit wants to buy or sell a home, start or expand a business, or engage in virtually any activity that includes financing or capital.  President Biden has a rare opportunity to put his imprint on the Fed, the economy, and the banking system for years to come and the selection process should reflect the gravity of those facts.

Our report and the supporting materials are must-read content for Fed watchers and concerned Americans alike. 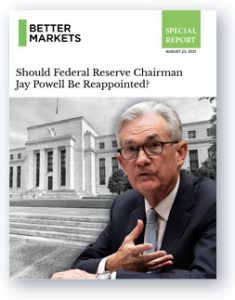 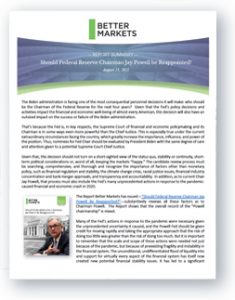 White Paper: No Financial Crash Yet Thanks to Dodd-Frank and Banking Reforms

Powell and Brainard Both Have Votes to Be Fed Chair, Sherrod Brown Says
Bloomberg, November 16, 2021

Why Lael Brainard is best qualified to lead the Fed
Yahoo Finance, November 16, 2021

We Need More Women in Leadership at the Fed: Personnel is Policy
Ms. Magazine, October 18, 2021

For the Sake of Working People, Lael Brainard Should Lead the Federal Reserve
Marketplace, October 1, 2021

Should Biden Reappoint Jerome Powell? It Depends on His Theory of Change.
New York Times, September 14, 2021