At the 10-year anniversary event, Better Markets released two new reports that address the 2008 crash, the passage of the Dodd-Frank Act, what has happened to it under the Obama and Trump administrations, and what the future holds for financial reform. These reports remind people of what happened, and why, as well as set the historic record straight.

Better Markets released the reports during the virtual conference “Ten Years After Dodd-Frank.“ 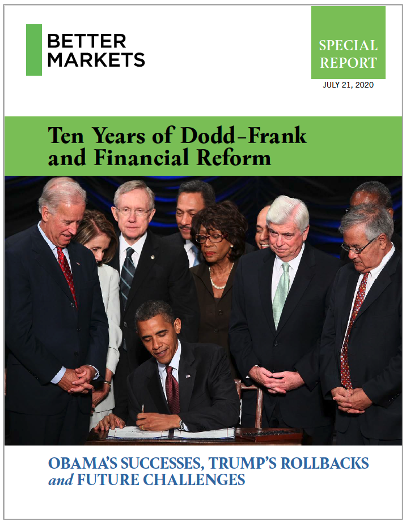 “Ten Years of Dodd-Frank & Financial Reform: Obama’s Successes, Trump’s Rollbacks & Future Challenges” explores the consideration, passage and implementation of the historic financial reform law. The report highlights the dangerous weakening of the law during the Trump administration and shares ideas many are raising about what comes next for financial reform—beyond the Dodd-Frank Act. 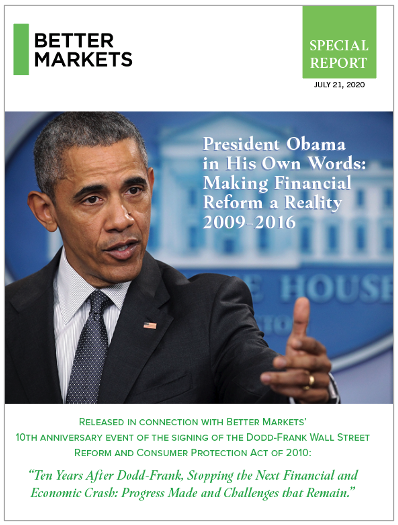 “President Obama in His Own Words: Making Financial Reform a Reality 2009-2016” reviews all of the statements and speeches made by the President during his administration related to his fight for financial reform, including those related to the unrelenting industry and political opposition. The challenges, frustrations and importance in fighting for, passing and implementing the most sweeping financial reform law since the Great Depression come through loud and clear.

Dennis Kelleher, president and CEO of Better Markets, says the reports are “stark reminders of what was at stake then and what is still at stake today in financial reform. Unfortunately, too many in the financial industry, led by Wall Street’s too-big-to-fail banks, are still working to weaken and gut the Dodd-Frank Act. These reports make clear the importance of the Dodd-Frank Act and why we must remain vigilant and prevent additional rollbacks that threaten Main Street families’ jobs, homes, savings and so much more.”